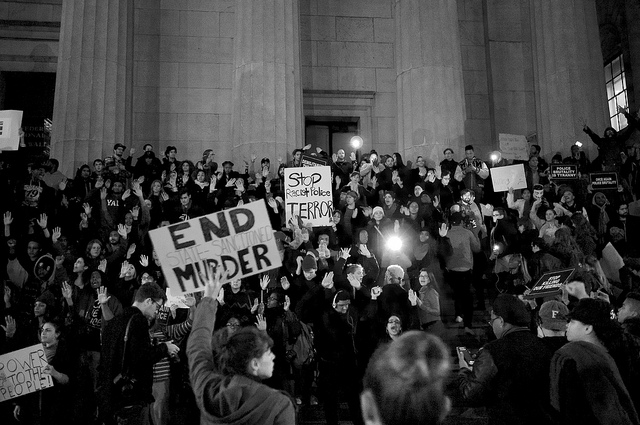 Feeling Angry About the Darren Wilson Decision? Join the Fight for the ‘Michael Brown Law’

We can’t change the grand jury’s verdict, but we can take action alongside the Brown family to require police to wear body cameras.

Michael Brown's family has given us a cause for which to fight.

What can we do? Many of us are grappling with this question in the days after learning that the grand jury in Ferguson, Missouri, decided not to indict Officer Darren Wilson for killing an unarmed Michael Brown on August 9. What do we do with the anguish and the anger we feel about this case and about the systemic mistreatment of black and brown people in our country by the police, the judicial system, and by their fellow citizens?

We protest, peacefully. We fight for change—what people are doing all over this country right now. Michael Brown's family has urged us to do exactly that. In a statement issued after the grand jury decision was announced, the Brown family said:

We are profoundly disappointed that the killer of our child will not face the consequence of his actions.

While we understand that many others share our pain, we ask that you channel your frustration in ways that will make a positive change. We need to work together to fix the system that allowed this to happen.

Join with us in our campaign to ensure that every police officer working the streets in this country wears a body camera.

We respectfully ask that you please keep your protests peaceful. Answering violence with violence is not the appropriate reaction.

Would putting a body camera on every police officer in America end police abuse? Of course not. But evidence suggests that it would have an impact.

In Rialto, Calif., … an entire police force is wearing so-called body-mounted cameras, no bigger than pagers, that record everything that transpires between officers and citizens. In the first year after the cameras' introduction, the use of force by officers declined 60%, and citizen complaints against police fell 88%. …

Michael White, a professor of criminology at Arizona State University and the sole author of the Justice Department's report on police and body-mounted cameras, says the cameras, now a curiosity, could soon be ubiquitous. It has happened before: Taser's guns went from introduction to use by more than two-thirds of America's 18,000 police departments in about a decade. “It could be as little as 10 years until we see most police wearing these,” says Dr. White.

In the U.K., where tests with them began in 2005, studies have shown that they aid in the prosecution of crimes, by providing additional, and uniquely compelling, evidence. In the U.S., in some instances they have shortened the amount of time required to investigate a shooting by police from two-to-three months to two-to-three days.

The Brown family seeks to honor their son's death by pushing for the “Michael Brown Law,” which would mandate such body cameras for police. After Brown's killing in August, they organized a petition drive that culminated in the submission of over 150,000 signatures to the White House.

I have tremendous respect for what the Brown family is doing here. They hope that their efforts will result in some other families not suffering losses like theirs.

I am fortunate and profoundly grateful that I have never had to suffer the pain of losing a child. I can't imagine what that would be like. And I can't imagine how the Brown family feels having lost their child, particularly in the way that they did, and to have suffered again with the injustice of not seeing their child's killer even face a trial.

And I’m fortunate that I can expect the police will, in all likelihood, give my children the benefit of the doubt if they ever happened to do something as stupid as openly wave a gun around while clearly intoxicated, like police did in Kalamazoo, Michigan, earlier this year when confronted with a 63-year-old white man who did just that.

In that case, the first officer on the scene didn't even draw his own gun. He simply asked, politely, for the man to turn over his weapon. When he refused to do so, or even to comply with requests to identify himself, and then angrily asked the officer, “Why don’t you fucking shoot me?” the officer answered: “I don’t want to shoot you; I’m not here to do that.”

That should be the mindset of all police, no matter the skin color or age of the person with whom an officer is interacting. I expect officers to treat my children that way. Such an expectation should not be a privilege conferred by skin color. It should be a right guaranteed to all in the United States—but it is not.

So are you angry about Ferguson? Good. Let's take that anger and use it to fight for change, to fight for justice. In their written statement after the news about the refusal to indict Darren Wilson, the Brown family said, “Let's not just make noise, let's make a difference.” And, as the successes we've won in the fight against stop-and-frisk have shown, activism on behalf of racial justice can accomplish a great deal, even in 21st century America.

Michael Brown's family has given us a cause for which to fight. I can't think of a better way for us to honor his death than by following their wishes and joining them.