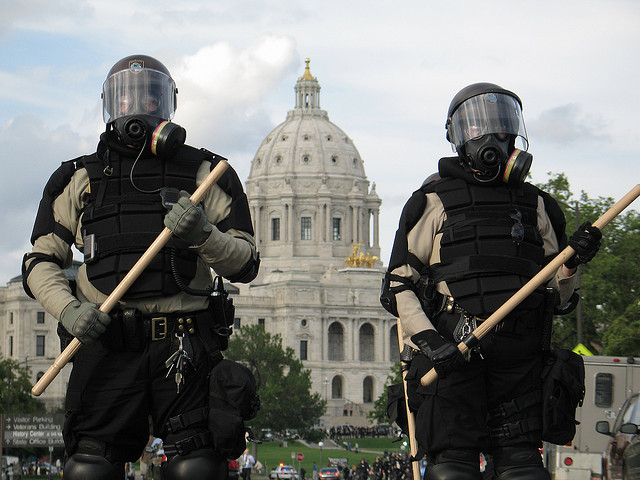 The proposed policing reforms in response to the killings of Michael Brown and Eric Garner won’t lessen police violence against communities of color. In fact, they may actually make it worse.

Another round of reports and high-tech toys will not change policing and its role in sustaining "the new Jim Crow."

Nearly four months after the shooting death of unarmed black teenager Michael Brown, with protests in over 150 American cities, and just days before the decision not to file charges against the NYPD officer who choked Eric Garner to death on Staten Island, President Barack Obama finally provided a set of actions to address police brutality in America. Obama’s four-point plan is to create a task force, produce a report, systematically track military weaponry in civilian police departments and purchase 50,000 body cameras.

While these actions may seem like needed steps towards transparency, another round of reports and high-tech toys will not change policing and its role in sustaining what Michelle Alexander calls “the new Jim Crow.” In fact, liberal-minded reforms such as Obama’s have a long history of legitimating state-sanctioned surveillance and violence.

We’ve been here before

The Kerner Commission Report, a seminal 1967 work on urban unrest in America quoted frequently, estimated that 50% of urban riots in the 1960s were initiated by police. In the wake of broad civil rebellion, liberal Democrats, Dixiecrats and Republicans joined forces to address riots, crime and civil disobedience. Using a formula that has been repeated across federal and state legislatures, lawmakers sought to quiet domestic unrest through a never-ending process of “police professionalization.”

Naomi Murakawa, a professor at Princeton, studies public policy and race in America. In her book The First Civil Right: How Liberals Built Prison America, Murakawa details how the catchall term of “professionalization” obscured the very real differences in this unwieldy coalition:

Given the diverse goals of police professionalization and the compromises required to pass any set of reforms, the resulting 1968 Omnibus Crime Control and Safe Streets Act ended up providing the tools and resources for even greater police violence. Instead of solving the root causes of unrest and police violence, the program initiated direct transfers of cash and equipment to local police departments to procure everything from radios to helicopters.

Unsurprisingly, in the South, discretionary funding was used to suppress black political agitation. In a federal legislature dominated by Democrats, led by President Lyndon Johnson, Louisiana was given funding to purchase a tank—which was then used to attack the New Orleans Black Panthers.

While some liberal commentators have called for more training of the Ferguson Police Department, the St. Louis “unified command” of 1,000 area police received a total of roughly 5,000 hours of training to “deal with potential unrest.” The very process of “professionalizing” the police simply means they’ll get more tools to continue their mission of repressing poor populations—not that they’ll have a new mission.

What do police do?

Most police departments have a simple motto: to serve and protect.  But in a country with an economic system that produces ever-expanding inequality and ongoing racial oppression, the job of police is to serve the political elites and protect the class interests of the wealthy. Or, as former Black Panther and 43 year political prisoner Eddie Conway recently said, “They [police] look at the poor communities, both white and black, as a hostile war zone, and they act accordingly.” Police are part of a complex set of actors and institutions that work to create a vast class of unemployed (and unemployable) people who are ripe for exploitation by banks and corporations.

Attempts to prove that “black lives matter” by pushing for increased police funding and perhaps some diversity training ignore decades’ worth of data suggesting that liberal interventions in policing have had no impact on police violence. Brad Smith of Wayne State University published a 2003 study detailing the effect of the racial make-up of police departments on police homicides. His findings were stark: “More diversified departments do not have significantly lower levels of police-caused homicides.” He goes on to report that “regardless of who is carrying out the police function, police will always be seen as representatives of the larger establishment. As such, tensions between police and citizens may be a function of the police role.”

While some are encouraged by the possible spread of police body cameras, the notion that expanded surveillance will make us safer is illusory. The recent non-indictment in the police homicide of Eric Garner—who was filmed for all the world to see as police put him in an illegal chokehold—shows the limited progressive potential of increased surveillance.

Lest we think the Garner case an aberration, Chicago’s sprawling ghettos are home to an estimated 24,000 cameras that monitor high crime areas. When a Chicago resident was approached by police in 2009 in direct view of a police camera, the camera magically turned away from the incident and faced the ground during a disputed arrest. In Cincinnati, a police camera accidentally malfunctioned when a policeman shot a suspect. The same camera accidentally malfunctioned a year later when the same officer crashed his car into another driver, causing a life-threatening injury. In refusing to acknowledge the role police play as enforcers of the status quo, liberals will continue to empower the very forces they claim to distrust.

Creating a credible alternative to violent, racialized policing will require a broad program of social change grounded in lessons learned by previous movements. Historian Gerald Horne notes that the formal system of American apartheid was brought to an end not by liberal reformers, but by radicals working across national boundaries to put pressure on the political elite. “It was an international movement that led to the erosion of Jim Crow,” he says.

Some organizers on the ground are advancing an international approach. In Detroit, organizers called upon the United Nations to help in their battle for affordable, potable water. In Chicago, youth who have suffered at the hands of brutal policing have taken up Paul Robeson’s 1951 effort to call attention to state sanctioned violence under the name We Charge Genocide and recently petitioned the U.N.

Garnering international attention is important, but the movement also needs concrete actions that can help reimagine policing. One such concrete step is to radically reduce the amount of infractions requiring police intervention. Chase Madar, a lawyer and author, has documented the alarming growth of policing to resolve social problems. There’s a seemingly limitless amount of infractions someone can be arrested and incarcerated for: loitering at a bus stop, improperly processing a state payment, serving mimosas at a bridal shop or just driving home.

Given such a long list of actions that can lead to arrest, is it a surprise that police arrest so many Americans? Organizing and fighting to shrink the size of the criminal justice machine and find new ways to create safe neighborhoods is vital to ending police violence.

Towards a New Path

There will be limited success, however, as long as our economy relies on a massive pool of impoverished and isolated people to generate wealth. Neoliberal economic policy celebrates greed, predation and unaccountability. A respectable, well-functioning police force is nearly impossible under such conditions. Rather, restructuring our economy has the best potential to restructure how police interact with citizenry.

Organizers in Ferguson have already pointed out that the city’s local budget is built on over-policing to generate revenue, a form of regressive taxation. Policies such as a progressive income tax, universal basic income, guaranteed housing, state-provided child care and health care, free universal education and massive productive investment in infrastructure, green energy and basic research would do more to prove that black lives do, indeed, matter than another report on “police-community relations” and high-tech wizardry.

In calling international attention to the crisis in state-sanctioned violence and demanding a reorganization of our broader economy, organizers can address our interlinked crises.  The explosive imagery of Americans ducking rubber bullets and tear gas are surely familiar to Palestinians in the occupied territories, Banlieue dwellers in the suburbs of Paris or Brazilians in the Favelvas overlooking Rio di Jinaero. It only makes sense that organizers seek out transnational tools to push back against transnational oppression.

Michael is the Executive Director of the Center for Progressive Strategy and Research where their research interests include race, employment and transnational labor solidarity. They currently sit on the board of The People’s Lobby Education Institute and have previously served on the boards of the Crossroads Fund and In These Times magazine. They are a proud member of Chicago's progressive queer community.