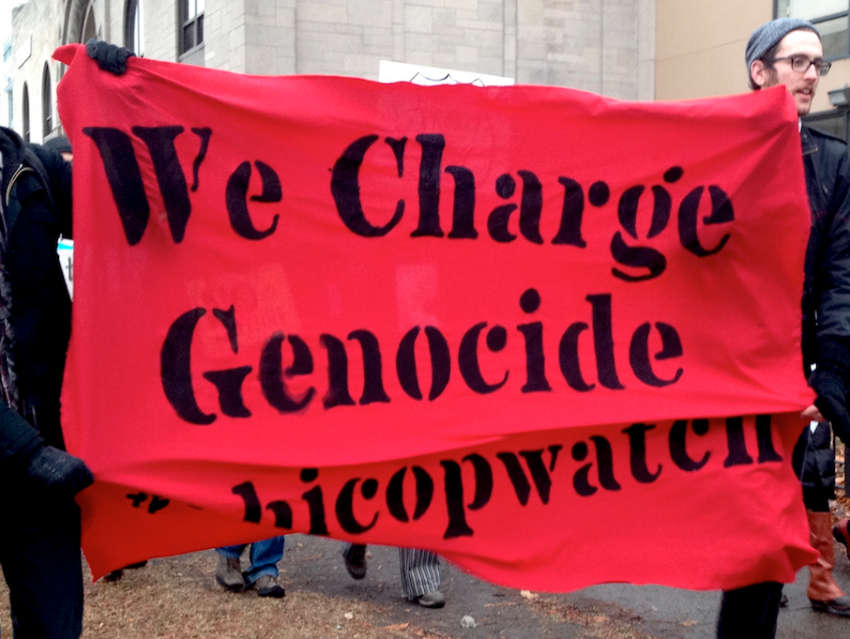 Momentum is growing for a bill to finally help heal the wounds of years of torture of black men by the Chicago Police Department.

The ordinance, first introduced in October 2013, has received support from 27 aldermen, including its most recent endorser Ald. Robert Fioretti from the 2nd Ward, a progressive running for mayor against Rahm Emanuel. While Emanuel has publicly apologized for Burge’s actions, activists say he has yet to put a close to the city’s “dark chapter” by supporting reparations for the police torture victims.

In front of the Chicago Police Headquarters yesterday on the city’s South Side, a group of about 100 marchers, flanked by clusters of police officers on the sidewalk, huddled together with signs reading “Two Decades Too Many” and “Reparations Now.”

“We [are here] for the survivors of this heinous wrong … perpetrated under the uniform and the badge of the city,” said Adam Green, a University of Chicago history professor and a member of the Chicago Torture Justice Memorial (CTJM).

Members of activist groups We Charge Genocide (WCG), Project NIA and Amnesty International marched alongside members of CTJM Tuesday afternoon to deliver 40,000 petition signatures in support of the Reparations Ordinance. The five-mile march also held a memorial at City Hall to honor the survivors of police torture under former Chicago Police Officer Jon Burge, as well as to pay tribute to victims of police violence like Michael Brown.

Green said Tuesday’s demonstration was inspired by WCG’s recent visit to the United Nations’ Committee’ Committee Against Torture and compelled the “city to act” on the  “lack of true accountability for the officers and system that perpetrated this violence.”

For nearly 20 years, Burge led a “torture ring of white Chicago detectives” and used violent measures to get confessions from their suspects. In 2010, Burge was convicted of perjury for lying about the police torture. After serving most of his four-year sentence, Burge was released from prison and transferred to a halfway house in Florida to complete the rest of his sentence.

“For too long, their witness, truth and human dignity was denied by a department and a city that ignored facts and obstructed justice,” Green said.

The ordinance, first introduced in October 2013, has received support from 27 aldermen, including its most recent endorser Ald. Robert Fioretti from the 2nd Ward, a progressive running for mayor against Rahm Emanuel. While Emanuel has publicly apologized for Burge’s actions, activists say he has yet to put a close to the city’s “dark chapter” by supporting reparations for the police torture victims.

Mark Clements, a Burge torture survivor, asked City Council to “have a heart” and approve the ordinance. In 1981, Clements, who was 16 at the time, confessed to a crime he did not commit after being tortured by police. As a result, he spent nearly 30 years in prison.

“Sixteen years old, hand cuffed to a ring around the wall, having my genitals grabbed and squeezed and called a ‘n-word-boy,’” Clements said, tears running down his face as he recalled the horrific incident inside a Chicago police station.

Clements stressed that torture victims themselves aren’t the only ones who have suffered in the years since the torture; family members, too, have been traumatized, he said—and needed to be accounted for.

“I need counseling,” said Jeanette Plummer, mother of Chicago police torture victim Johnny Plummer. “I can’t sleep.” Plummer said her son, now 38, was just 15 years old when he was beaten into giving a confession for a murder he now says he did not commit and is still in prison today.

“I’m tired. My health is failing me,” Plummer said. “I’m tired. I want my son to come home. Let me get my son before I leave this earth.”

Armanda Shackelford, the mother of Gerald Reed, another torture victim, stood alongside Plummer and echoed her despair.

“I’m here for all the men that are there [in prison] for crimes they did not commit. I want them out also,” Shackelford said. “This is my job.”

Shackelford and Plummer said they will not only continue to fight for the freedom of their sons but for other tortured victims still silenced by the police violence.

The march and the memorial service set the tone for the role of young activists in challenging and reconstructing the perception of young people of color and police violence in Chicago.

“The fight isn’t about me anymore. The fight is about my grandchildren,” Clements said. The 49-year-old activist said it was encouraging to see young people take interest in Tueday’s demonstration because activists like him are “getting older.”

Page May and other members of WCG wore a black shirt with text printed in red reading: “Unapologetically Black.”

“It’s good to be angry. You should be angry,” May says. “But we’ve got to get organized.” The purpose of the WCG is to provide a platform of leadership for young people of color, May adds.

Malcolm London, a local poet and member of WCG, led a chant in asking “which side are you on” and presented the “naughty” and “nice” list of aldermen who did and did not support of the Reparations Ordinance.

“Being black and being on the West Side of Chicago, police presence and police contact [with me] is prevalent,” London said. “This ultimately affects my family and people who look like me across the country and across the globe.”

May and London shared that their roles in the organization have been a multitude of emotions, from empowering to depressing.

“It’s easier to pretend it’s not happening. It’s easier to just let yourself feel enough like when you go to meetings,” May says. But joining the campaign against police torture has been a deeply emotional, she says. “There are days I don’t want to wake up. That’s a part of the struggle—recognizing how awful it is.”

The ordinance, outlined by CTJM, survivors and activists, would provide survivors with free education at City Colleges and build a center to offer vocational training, psychological counseling and health care services. Chicago Public Schools would also need to include cases of local police violence in their curriculum, as well as offer funding for public memorials.

May says passing the ordinance would “liberate” torture survivors and their families from the years of torment they have dealt with—and start the healing process for victims.

With contributed reporting by Jordan McCurdy.