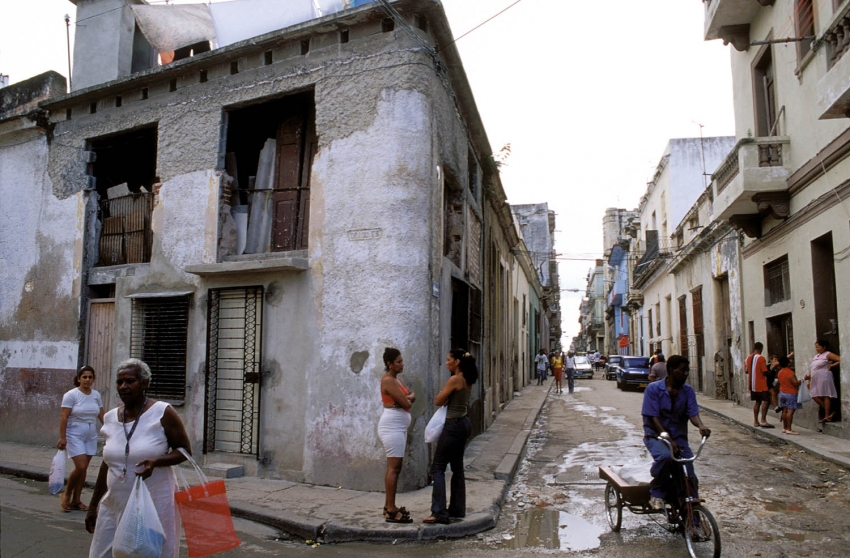 Whatever Obama’s Calculations, Socialism Is Still Alive and Well in Cuba

After 54 years of the most powerful country on earth with its boot on your collective neck, any relief is worthy of celebration.

If U.S. officials simply leave Cuba alone, the economy will do quite well, thank you.

In 1992, a ragtag group of 106 caravanistas confronted some 400 federal officials at the U.S.-Mexico border in Laredo, Texas. Under the leadership of the late Rev. Lucius Walker, we were loaded with medicines, school supplies and used bicycles bound for Havana. This was the first public challenge to the U.S. blockade of Cuba since the blockade’s establishment in 1961.

It was a time of fear and boding—for us, for Cuba, and for the Left as a whole. Months before the caravan, the U.S. Treasury Department sent the caravan’s participants letters threatening 10 years in prison and fines of $250,000 each if we went through with our plans.

In Cuba, the population was suffering from a sudden and unexpected loss of Soviet trade after the dissolution of the Soviet Union in 1991. The economy shrank by nearly half between 1989 and 1995. All my friends on the island lost weight, as there simply wasn’t enough food.

Meanwhile, right-wingers, liberals and social democrats in the U.S. were still celebrating the fall of the Berlin Wall. Sensing “victory” in struggling Cuba, Congress passed the Torricelli Law, followed a few years later by Helms-Burton, both strengthening four decades of an economic blockade of the island. Miami’s infamously anticommunist Cuban-Americans were making plans for a triumphant return to a newly capitalist Cuba.

How times have changed. On December 17, Presidents Barack Obama and Raúl Castro opened a new era of U.S.-Cuba relations with simultaneous speeches in Washington and Havana. A prisoner exchange—three Cubans, who infiltrated terrorist groups in Miami planning to attack Cuba, for a U.S. spy and a U.S.A.I.D. agent—garnered immediate attention.

But Obama may be casting a wider net, including restored diplomatic relations, relaxed travel restrictions, bilateral bank operations, increased family remittances and commerce and removal of Cuba from its ridiculous inclusion on the U.S. list of terrorist countries. It remains to be seen if a Tea Party Congress will try to sabotage these modest, and long overdue, changes.

Cuban President Raúl Castro was circumspect. He heralded the move toward formal diplomatic relations, while noting the blockade is codified in law and only a willing U.S. Congress can end it. Obama retains executive authority to modify its implementation, but how far will he go? Even if new travel regulations restrict U.S. tourist visits, and bilateral commerce is limited to its current one-way “cash for food and medicine,” it would help Cuba immensely if the U.S. simply stopped internationalizing the blockade. Currently, we fine foreign banks for processing dollar-denominated transactions, force foreign ships that stop in Cuba to wait six months before entering U.S. harbors, and use backroom diplomacy or outright threats to convince foreign corporations with business interests in the United States to avoid Cuban commerce, all very much to the chagrin of our allies around the world.

Cuba already enjoys friendly relations with the rest of the world and has a well-developed pharmaceutical industry, a growing tourist industry and the possibility of offshore oil. If U.S. officials simply leave Cuba alone, the economy will do quite well, thank you.

After all, Cuba retooled its entire economy twice, from U.S. technology pre-1959, to Soviet bloc technology until 1990, to an amalgam of Chinese, Latin American and European technology today. The fact that Cuba survived is a testament to the creativity of the Cuban people and the intelligence of the political leadership.

The next steps are unclear. Republicans and some Democrats are threatening to withhold money to establish an embassy, though the current U.S. “Interests Section” in Havana is already a fully operational de facto embassy, lacking only an ambassador in name.

One wonders what caused Obama to act now. Perhaps we can take him at his word: that confrontation and blockades have accomplished nothing (aside from making 11 million Cubans poorer). After all, he’s right. Perhaps he has in mind the 2016 presidential election and changing voting patterns among younger Cuban-Americans in Florida. It’s hard to imagine this decision wasn’t consulted with Hillary Clinton. Or perhaps he is learning a lesson from the Middle East, where a series of U.S.-inspired military conflicts and economic meddling spawned not democracy and prosperity, but ISIS and misery.

Perhaps the Obama administration is learning the inevitable dialectic of unforeseen consequences. As he noted in his speech, “We know from hard-earned experience that countries are more likely to enjoy lasting transformation if their people are not subjected to chaos”—a profound, if belated, indictment of U.S. support for Cuban-American terrorist operations on the island as well as the blockade.

Whatever Obama’s calculations may have been, in Cuba, socialism is alive and well, if changing in form, and Cubans are celebrating—watchfully. After 54 years of the most powerful country on earth with its boot on your collective neck, any relief is worthy of celebration.

Cuba continues to play an outsized role internationally. More Cuban doctors are fighting Ebola in West Africa (15,000 doctors volunteered) than any other country, and they far outpace the U.S. contribution. Cuban influence among youth and the Left in Latin America continues to be strong. Universal free healthcare and education make Cubans among the continent’s most healthy and educated people.

The U.S. stands to learn a lot from Cuban socialism. Let’s hope this new Obama initiative is not another false start, one more in a long history. It’s too early to pop the champagne, but this author jumped for joy and cracked a beer.

By the way, after a daylong standoff, the caravan crossed into Mexico and continued on to Cuba via ship, the first of many such efforts at popular diplomacy and civil disobedience. Rev. Walker often characterized us as a civil rights movement in defense of Cuban sovereignty. We were proud to stand shoulder to shoulder with 11 million Cubans, because whatever their political positions, I dare say not a single island resident supports the blockade. Too bad our political class wouldn’t listen back then.

Tom Hansen was the National Coordinator of Pastors for Peace and the lead organizer on the first five Friendshipment caravans to Cuba. He holds a Ph.D. in rural development from the U.A.M.-Xochimilco in Mexico City and currently leads a study abroad program in Cuba organized by the Autonomous University of Social Movements.