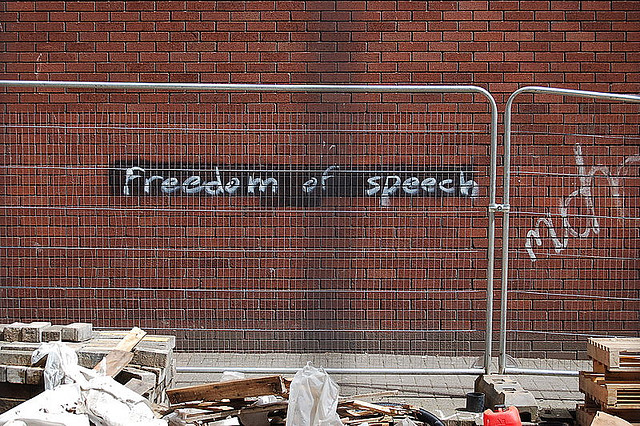 Progressive social media activism can be absurd and self-defeating, but it shouldn’t be a tool for smug liberals to dismiss radical critiques.

Chait’s essay is not only about Internet activism: It transforms a relatively small number of vocal activists into stand-ins for the “radical left” as a whole, and sets up a grand standoff between “good” liberalism, which respects individual rights and free speech, and “bad” leftism, which shuts down debate with dogma and fanaticism. In other words, Chait tries to restage the classic canard of Cold War liberalism, in which liberals heroically stand for democratic rights against the leftist totalitarians.

Jonathan Chait’s essay on the “return” of “politically correct” speech policing has predictably polarized the internet, earning praise from his fellow liberals and flippant dismissals from his targets on what he calls the “radical left.” Because it’s written from Chait’s usual perspective as a liberal who smugly mocks everyone to his left, the negative reaction to the essay is understandable. But perhaps we should try to rescue some valuable criticisms from the objectionable framing.

As he often does, Chait makes some good points, and very pithily encapsulates the problems with current progressive discourse on the Internet, on college campuses, and elsewhere (but mostly on the internet). To summarize those problems briefly, as Chait portrays them: it is allergic to debate and discussion; it is unable to separate public political debate from the private concern for survivors of abuse, and thus demands that all general forums be turned into “safe” environments; it considers all allegations of abuse or offense to be ipso facto true and refuses to accept any evidence as proof of the contrary; it goes to the extreme in essentializing people’s speech based on their social, racial or sexual position; it ruthlessly polices and divides people who are on the same side; and finally, it is smugly indifferent, if not actively hostile, to the very outsiders the left should be trying to persuade.

When Chait focuses on the specific phenomenon of internet social justice activism—the goings-on inside the Binders Full of Women Facebook group, for example—he gets the critique mostly right: It is far too often derailed by vicious infighting over trivial matters, and frequently produces a chilling effect even on its insider participants.

But Chait’s essay is not only about Internet activism: It transforms a relatively small number of vocal activists into stand-ins for the “radical left” as a whole, and sets up a grand standoff between “good” liberalism, which respects individual rights and free speech, and “bad” leftism, which shuts down debate with dogma and fanaticism. In other words, Chait tries to restage the classic canard of Cold War liberalism, in which liberals heroically stand for democratic rights against the leftist totalitarians.

That this sort of narrative still boasts such a powerful following in American political discourse proves how much the critiques Chait dismisses are needed. It’s mind-boggling that in 2015, respected liberal writers still hoist themselves up on the pedestal of “the classic Enlightenment political tradition that cherishes individuals rights, freedom of expression, and the protection of a kind of free political marketplace,” with so little awareness of how those lofty ideals are invoked to deny that Western societies structurally deny equal rights to minorities. Most of the critiques Chait is rejecting are trying, little by little, to show how women and especially racial minorities are still marginalized and silenced despite the pretensions of egalitarian liberals to defend the rights of everyone. For those liberals, it seems, simply agreeing with the theoretical notion that everyone should have equal rights is enough; actually insisting that it be brought about in practice is divisive and dogmatic.

Someone who can’t seem to understand why Ayaan Hirsi Ali—a woman who perpetuates egregious racial and religious stereotypes and unapologetically promotes Western militarism toward Muslims— is controversial inadvertently exposes the position of ignorant privilege the typical American center-left pundit occupies. Chait similarly doesn’t get the criticism of the self-righteous Western response to the Charlie Hebdo shooting, lamely recycling the “equal opportunity offender” defense that rests on the willful ignorance of the fact that social differences deeply condition access to rights that are supposed to be “equal.”

So to correct the record: The current excesses of certain kinds of progressive activism have nothing to do with their alleged rejection of the “Enlightenment political tradition,” which has always been more of a mythical ideal than a reality. Chait is simply assuming that his predominantly liberal readership won’t notice the equation of stridency with radicalism, with the leap from a few misguided speech policers to the “radical left” as a whole.

In fact, this is not about an epic struggle between democracy and totalitarianism. The misguided excesses of the Social Media Left have more to do with the dynamics of the Internet, and the fact that the mainstream press has egged on the cycle of outrage in the pursuit of profit—identity-based outrage is now one of the most reliable sources of clicks and Facebook shares—which in turns increases the social profile and status of the activists instigating it. (As Chait himself puts it, “Every media company knows that stories about race and gender bias draw huge audiences, making identity politics a reliable profit center in a media industry beset by insecurity.”)

This is not a story about the endemic illiberalism of the radical left, but about the perfect marriage of contemporary progressive activism with media consumerism. All too often, the demands of the Social Media Left are for simply for more inclusive media and entertainment, which doesn't do much to put our consumerist culture itself into question. While I recognize the value of certain cultural categories to both academic scholarship and political activism, getting too caught up in the ephemeral cultural discourse of the moment simply reproduces the cycle of capitalist cultural production. The offenses, the backlashes, the backlashes to the backlashes, are all almost pre-programmed ways the contemporary capitalist media produce cultural “debates” that really, for the most part, are tied to selling consumer products through advertising.

Far too few social media activists recognize this, in part because their participation in the Internet outrage cycle is a form of therapy or part of their membership in a faddish in-group. Their activities are divorced from the difficult realities of offline political movement building and uninterested in kinds of resistance that actually change things. Whatever that is, it is certainly not radicalism, and opportunist liberals like Chait shouldn’t be allowed to conflate the two.

The problem with Chait’s essay is not that he’s wrong about the absurdities of the Social Media Left; in fact, he couldn’t be more right about them. The problem is that he has turned that critique into a sweeping, self-righteous parable about the philosophical superiority of his own brand of liberalism—the kind of liberalism that, like many of Chait’s political positions, is functionally indistinguishable from conservatism.

David Sessions is a doctoral student in history at Boston College. He is founding editor of Patrolmag.com and his writing has appeared in The Daily Beast, Newsweek, Jacobin, Slate and elsewhere.