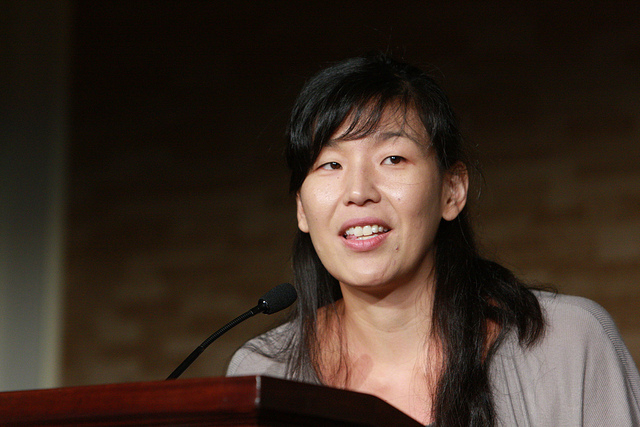 When it comes to providing care for an aging baby boomer population, Poo says, we need to think bigger.

Even if the elder boom doesn’t transform us overnight into a newly compassionate community, it may at least push us to face up to what’s coming, for our parents and for us.

Ai-jen Poo’s The Age of Dignity: Preparing for the Elder Boom in a Changing America is a wake-up call about a basic demographic reality: “We have more senior citizens in America today than we’ve had at any time in our history.” More than 14 percent of the population is over 65, and that’s a tiny proportion compared to what’s coming. Poo says that in five years, 1 in 6 of us will be over 65; by 2030, that ratio will be 1 in 5. Our fastest-growing demographic is the over-85 crowd, which numbers more than 5 million now, and whose ranks are expected to more than double in the next 20 years.

From a fiscal perspective, this rise is cataclysmic: More than 70 percent of those over 65 are likely to need some form of long-term care, according to the Department of Health and Human Services, and only a small fraction have anywhere near enough savings stashed away. Two-thirds of seniors rely on Social Security payments—currently a little over $1,200 a month, on average—as their main source of income. For one-third, it’s their only income. And with austerity extremist Paul Ryan heading the House Ways and Means Committee, the new GOP Congress appears keen to chip away at Social Security provisions. Couple this huge strain on the public purse with the uncertain economy and high unemployment among the younger, would-be tax base, and it can be hard to see any opportunity in the crisis.

But if anyone can find cause for optimism, it’s Ai-jen Poo, director of the National Domestic Workers Alliance, who won a 2014 MacArthur “genius grant” for her activism on behalf of the huge, essential and largely invisible class of workers who are paid to take care of other people’s children, parents and grandparents. She’s also the co-director of a campaign, Caring Across Generations, which has the broader goal of promoting intergenerational communication and respect.

Her new book attempts to bridge the gap between the concrete political and practical challenges of an aging population—and the harder moral and spiritual questions of how we ought to treat our elders and how we imagine our own aging and death. The book is part testimony from caregivers and recipients about their intimate relationship; part manifesto, urging us to see the new demographic reality in a positive light; and, more cautiously, part exploration of how we might do better by our senior citizens. It’s not always effective at weaving together these threads; instead, it tends to lurch from the micro level of moving personal stories to the macro scale of sobering statistics. Yet the urgency is undeniable.

The devaluing of domestic work has several sources. Capitalist societies have routinely treated the work of women in the home as a labor of love, not money. Compounding that, New Deal legislation excluded domestic work—dominated by African-American women—from fair labor laws. Legal restrictions and the isolated nature of their working lives make it all but impossible for domestic workers to bargain collectively, leaving them subject to the goodwill of their employers. And for the undocumented immigrant workers who make up a significant minority of caregivers today, complaining is especially risky.

Then there’s the ambiguity of the concept of “care,” a word with a double meaning of both a basic human instinct and a low-status job. Shouldn’t care, like love, be given freely? Even well-meaning families can have a hard time seeing themselves as employers, preferring to treat a professional caregiver as “part of the family,” which often translates to “extra favors and no boundaries.”

Poo doesn’t have a single, sweeping solution, but she sees powerful possibilities in connecting people who need jobs with those who need care. With proper regulation and training, she argues, it ought to be possible to turn elder caregiving into a stable and attractive career path. In 2010, Poo and Domestic Workers United managed to pass landmark legislation in New York State that reversed some of the New Deal-era exclusions, guaranteeing domestic workers the minimum wage, overtime pay, rest periods and paid vacation. The Department of Labor followed suit, and new regulations took effect January 1, extending wage and overtime protections to most home care workers nationwide, though legal challenges from home care agencies blocked their full implementation.

Poo argues that making caring a respected and regulated job will benefit both employers, by creating clearer boundaries, and elders, who will receive better care. Yet the testimony she has collected from a number of dedicated caregivers suggests that transforming attitudes may be the real challenge. “Some people say, ‘You just wipe ass,’ which is really humiliating,” says Erlinda, a caregiver from the Philippines who works in Chicago.

Nevertheless, in-home care is what nearly all of us want. Nursing homes in Poo’s narrative are dystopian horrors, where old people die confused, neglected and alone, and where workers are overworked and abused. Even if this picture is one-sided, it’s undeniable that nursing homes are expensive and staff turnover extremely high. But the isolation of in-home care can place huge stress on workers and families struggling to manage elders’ complex physical and psychological needs.

Poo cites the patient-centered PACE program, an effort by states to coordinate healthcare among multiple providers, as the current “gold standard.” The program focuses on preventive services and covers details like respite for caregivers and companionship for seniors. But it only operates in a handful of mostly blue states, and although it saves money in the long run, it is expensive to establish, making it a hard sell to short-term-minded legislatures.

We need to think bigger. Poo envisions a network she calls the “Care Grid,” a metaphor drawn from transformative infrastructure projects like the interstate highway system. The grid would unite “public, private and non-profit resources” to build “a comprehensive coordinated system in which elders can age with dignity and their caregivers, both professional paid workers and unpaid family or friends, can thrive as well.”

It’s been generations since we’ve built anything like the national highway network. But if the baby boomers who have done so much to reshape American life in recent decades prove to be vocal and united about what they want as they age, it’s possible that their preferences for independence and in-home care will dovetail with necessary labor reforms.

Poo may be optimistic to the point of sentimentality in her belief that “the demographic shift presents us with beautiful opportunities to connect and care across generations.” But even if the elder boom doesn’t transform us overnight into a newly compassionate community, it may at least push us to face up to what’s coming, for our parents and for us.