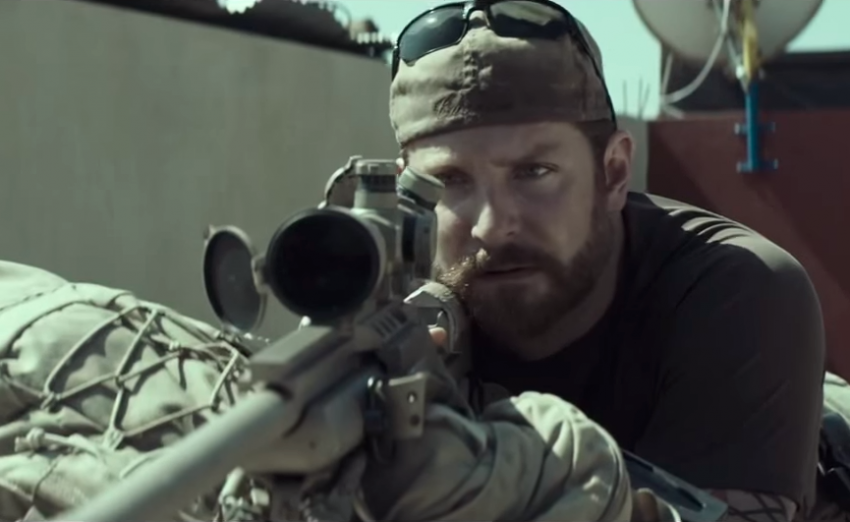 Veteran on ‘American Sniper’: The Lies Chris Kyle Told Are Less Dangerous Than the Lies He Believed

Enough about Chris Kyle. Let’s focus our anger against the authorities and the institutions that craft the lies that the Chris Kyles of the world believe.

After watching the movie American Sniper, I called a friend named Garett Reppenhagen who was an American sniper in Iraq. He deployed with a cavalry scout unit from 2004 to 2005 and was stationed near FOB Warhorse. I asked him if he thought this movie really mattered. “Every portrayal of a historical event should be historically accurate,” he explained. ”A movie like this is a cultural symbol that influences the way people remember history and feel about war.”

Garett and I met through our antiwar and veteran support work, which he’s been involved with for almost a decade. He served in Iraq. I served in Afghanistan. But both of us know how powerful mass media and mass culture are. They shaped how we thought of the wars when we joined, so we felt it was important to tell our stories when we came home and spoke out.

I commend Chris Kyle for telling his story in his book American Sniper. The scariest thing I did while in the military was come home and tell my story to the public—the good, the bad and the ugly. I feel that veterans owe it to society to tell their stories, and civilians owe it to veterans to actively listen. Dr. Ed Tick, a psychotherapist who has specialized in veteran care for four decades, explains, “In all traditional and classical societies, returned warriors served many important psychosocial functions. They were keepers of dark wisdom for their cultures, witnesses to war’s horrors from personal experience who protected and discouraged, rather than encouraged, its outbreak again.”

The film American Sniper is also rife with lies. This was not Chris Kyle’s story. And Bradley Cooper was not Chris Kyle. It was Jason Hall’s story, a one-time actor in “Buffy the Vampire Slayer” and screenwriter for “American Sniper,” who called his film a “character study.” Don’t believe him. His movie is as fictional as Buffy Summers.

In the movie’s first scene, Cooper faces a moral dilemma that never happened in real life. Cooper suspects a boy is preparing to send an improvised explosive device, or IED, toward a convoy of approaching Marines on the streets of Fallujah. Either he kills a child or the child kills Marines. A soldier next to Cooper warns, “They’ll send your ass to Leavenworth if you’re wrong.” In writing this line, Hall implies that killing civilians is a war crime and U.S. military members are sent to prison for it. If U.S. soldiers, including Kyle, don’t seem to be getting punished for killing civilians, then they must not be killing civilians.

Garett and I agreed that even if that boy was a civilian, nothing would have happened to Cooper for shooting him. Both of us were trained to take detailed notes with the understanding that if something went wrong, it would be corrected in the report. Americans were responsible for thousands of Iraqi deaths and almost none were held accountable.

During one incident in Iraq, Garett was involved in a firefight that left six to seven civilians dead. He received his orders from an intelligence officer who got his intelligence wrong. He led Garett and a small convoy to an Iraqi deputy governor’s compound, which was supposedly under attack. As the convoy approached, the soldiers spotted a cluster of trucks with armed Iraqis. The armed Iraqis saw the American convoy inching closer, but they didn’t fire. It seemed obvious to Garett that these Iraqis were not who the intelligence officer was looking for. Then the officer screamed, “Fire!” Confused, no one in the convoy pulled their triggers. “I said fire goddamn it!” Someone fired, and all hell broke loose. In the ensuing chaos, one of the Iraqi trucks struck a civilian seeking cover on the sidewalk. As it turned out, those armed Iraqis were the deputy governor’s own security detail. The officer didn’t go to Leavenworth.

In Hall and Cooper’s Fallujah, it’s as if the Americans just found a city that was already laid to waste. The movie leaves out America’s bombardment of Fallujah. An officer explains that the city has been evacuated, so any military-aged male remaining must be an insurgent. Conveniently, every Iraqi that Cooper kills happens to be carrying a rifle or burying an IED, even though the real Chris Kyle wrote that he was told to shoot anymilitary-aged male. Obviously, every non-insurgent did not evacuate Fallujah.

“Many Iraqis didn’t have cars or other transportation,” Garett explained. “To get to the nearest town, you’d have to walk across very hot desert, and you wouldn’t be able to carry much. So a lot of residents just decided to stay indoors and wait it out. It’d be like telling people in San Antonio that they have to walk to El Paso; then they come back home and their city is bombed and contaminated with depleted uranium.”

So what brought Bradley Cooper’s character to Iraq? Early in the film, Hall sets the stage for the moral theme of the movie. When Cooper was a child he sat at a kitchen table with his father, who explained that there are only three types of people in the world: sheep who believe “evil doesn’t exist,” wolves who prey on the sheep, and sheepdogs who are “blessed with aggression” and protect the sheep. In this world, when Cooper watches the 1998 U.S. embassy bombings on television, there is only one explanation: just evil wolves being evil. So he joins the military. When Cooper watches September 11 on television, there is one explanation: just evil wolves being evil. So he goes to war with them.

Amazingly, Hall and Cooper’s war seems to have absolutely nothing to do with weapons of mass destruction. It’s about al-Qaida, which in real life followed the United States into Iraq after we invaded. Cooper’s war also seems to have nothing to do with helping Iraqis, only killing them. Except for the military’s interpreters, every Iraqi in the movie — including the women and children — are either evil, butchering insurgents or collaborators. The sense is that there isn’t a single innocent Iraqi in the war. They’re all “savages.”

Finally, it seems that a voice of criticism will be heard through the character of Marc Lee. When Lee voices his skepticism, Cooper asks, “Do you want them to attack San Diego or New York?” Cooper somehow wins with that absurd question. Later in the film, Navy SEAL Ryan Job is shot in the face. Distraught, Cooper decides he should lead a group of SEALs back out to avenge Job’s death, which is portrayed as the heroic thing to do. While Lee and Cooper are clearing a building, an Iraqi sniper shoots Lee in the head. The audience is then at Lee’s funeral, where his mother is reading the last letter that Lee sent home expressing criticism of the war. On the road home, Cooper’s wife asks him what he thought about the letter. “That letter killed Marc,” Cooper responds. “He let go, and he paid the price for it.” What makes Cooper a hero, according to the film, is that he’s a sheepdog. In Jason Hall’s world, Lee stops being a sheepdog when he questions his actions in Iraq. He becomes a sheep, “and he paid the price for it” with a bullet from a wolf.

Hall claims his film is a character study, yet he shamelessly butchered Marc Lee’s real story (and part of Kyle’s) to promote his moral fantasy world and deny legitimacy to veterans critical of the war. Here’s the truth: On the day that the real Ryan Job was shot, the real Marc Lee died after stepping into the line of fire twice to save Job’s life, which apparently was either not “sheepdog” enough to portray accurately in the movie or would have taken the focus off of Cooper’s reckless heroics. You can’t have people believe that critical soldiers are actually not sheep, can you? And as it turns out, Kyle never said those things about Lee’s letter and never blamed Lee for his own death for being skeptical of the war. (Here is Marc Lee’s actual last letter home in full.)

Chris Kyle was like so many soldiers who served in Iraq and Afghanistan. He believed in doing the right thing and was willing to give his life for it. That trait that drives many veterans is a truly special one I wish we all had. Was Kyle wrong that the Iraq War had anything to do with September 11, protecting Americans, seizing weapons of mass destruction, or liberating Iraqis? Without a doubt. But that’s what he was told and he genuinely believed it — an important insight into how good people are driven to work for bad causes. Was Kyle wrong for calling Iraqis “savages”? Of course. In one interview, he admits that Iraqis probably view him as a “savage,” but that in war he needed to dehumanize people to kill them — another important insight into how humans tolerate killing, which was left out of the movie.

So enough about Chris Kyle. Let’s talk about Cooper and Hall, and the culture industry that recycles propagandistic fiction under the guise of a “true story.” And let’s focus our anger and our organizing against the authorities and the institutions that craft the lies that the Chris Kyles of the world believe, that have created a trail of blowback leading from dumb war to dumb war, and that have sent 2.5 million veterans to fight a “war on terror” that persists in Iraq, Afghanistan, Yemen, Syria and Pakistan. Critics and nonviolent organizers can be sheepdogs too.

Brock McIntosh served eight years in the Army National Guard as a combat MP, including a tour in Afghanistan from 2008 to 2009. He is a member of Iraq Veterans Against the War and has been involved in numerous veteran support and advocacy organizations. He is currently a Harry S. Truman Scholar pursuing an MPA at New York University.