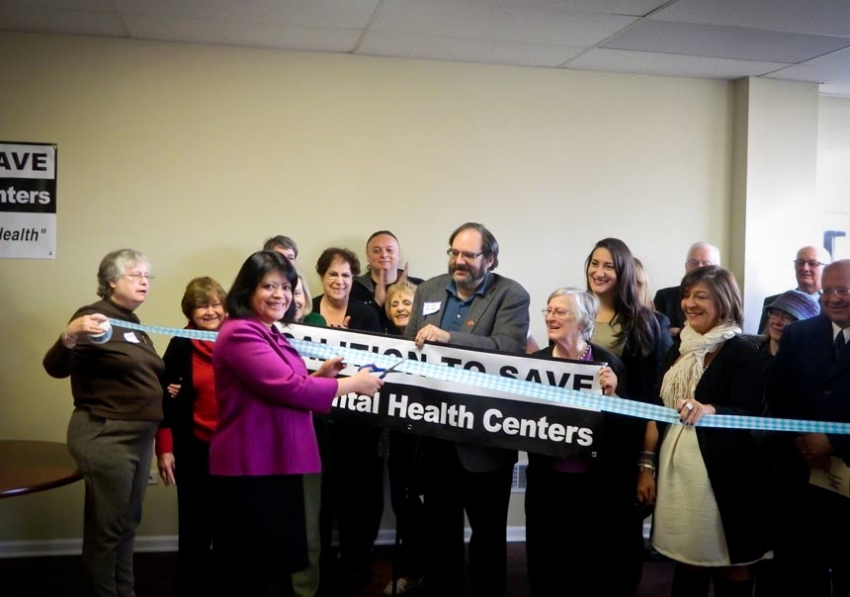 Why One Community Voted to Tax Itself

Public mental healthcare has been gutted in the past 50 years. An innovative Illinois law may provide an answer.

When Sharon Nichols said no to three teens who knocked on her door with a clipboard in the summer of 2009, she didn’t know her life was about to change.

Nichols refused the teens’ petition but took a newsletter, produced by the Coalition to Save Our Mental Health Centers. The Coalition was asking the city to act upon the wishes of local voters, who had recently passed a non-binding ballot referendum to raise their own taxes to expand local mental health services—an emerging strategy for funding public services that has drawn unusual bipartisan support. The city, however, wasn’t budging.

Glancing through the newsletter reminded Nichols of the women’s homeless shelter where she volunteered in the late 1990s at the suggestion of her parish priest. A number of the women there had mental illnesses. She thought many would have had jobs and housing if they had access to treatment.

“There was so much need beyond having a place to lay your head only to get kicked out in the morning,” she says.

Nichols, 67, a retired business manager at the University of Illinois at Chicago, thought, “These kids are out here going door-to-door, doing something that I should be doing.” So she ran after them. “Give me your clipboard,” she said. When she learned they’d had no luck on her block, she personally introduced them to neighbors. Soon after, Nichols joined the Coalition.

The group, based in the North River area of northwest Chicago, was formed in 1991 as Chicago officials considered cuts to the city’s then-vibrant network of public mental-health clinics. Started in the 1960s with a mix of federal, state and local funding, Chicago’s clinics soon became “an amazing and thriving system,” says Michael Snedeker, executive director of the Coalition. Counseling was available at the clinics for individuals, couples and families, and on-site at schools and senior centers.

In the 1980s, under Reagan, the federal government pulled its mental-health funding. State funding also decreased drastically. According to a report by the Washington, D.C.-based Judge David L. Bazelon Center for Mental Health Law, “In 2006, when adjusted for population growth and inflation, mental health spending by states was less than 12 percent of the $8 billion spent in 1955.”

Saving Chicago’s public clinics became a constant battle. Working with then-Alderman William Banks, the activists averted the closure of the North River clinic. But over the next two decades, the city closed other clinics and narrowed services at those that remained. “It became clear that the city was committed to chipping away at the mental health system,” says Snedeker.

In 2004, the Coalition collected enough signatures to get a non-binding referendum on the ballot in five North River wards asking to raise property taxes to expand mental health services. Nearly 58 percent of voters said yes. It was a strong statement, but the city didn’t act. So the Coalition got a more detailed referendum on the November 2008 ballot, proposing a .004 percent increase in property taxes to expand mental health services. It passed with nearly 71 percent of the vote.

Again, the City Council did not act. So the activists tried a different tactic. In 2010, they headed to Springfield, asking the Illinois legislature to draft a law allowing Chicago communities to pass binding referenda to raise property taxes to fund mental health services.

North River activists returned to canvassing for a referendum in their wards—this time, a binding one. Nichols talked to people in her neighborhood while out walking her beagles.

The conversations drove home just how widespread the need is for mental health services.

“They’d tell me a story about somebody in their family who needed mental health services,” Nichols says. One confessed, “If it wasn’t for being able to get a little free counseling, I think we would have gotten a divorce.”

It was “like we’d won the lottery,” says Diana Bryant, a Coalition activist and a mental health consumer at the North River Mental Health Center. “It was the most wonderful, wonderful feeling in the universe. We won.”

The vote came at a critical time. Between 2009 and 2012, Illinois had slashed funding for mental health services by 32 percent, among the steepest cuts of any state. In spring 2012, Chicago closed half of its 12 public mental health clinics. The remaining six have a collective capacity of 4,000 patients, the city says. That left North River as the only clinic for the entire North Side of Chicago, with a population of more than a million. The North River primarily serves people with severe mental illness, leaving few options for other low-income people who need counseling.

The new tax took effect in 2014, and has yielded more than half a million dollars—enough to open the nonprofit Kedzie Center, which provides free and low-cost counseling to area residents.

Housed in a new brick building, the Kedzie Center opened on October 29, 2014. Executive Director Angela Sedeño says that the Center has hired five fulltime clinicians (including her) and is doing intake for about five new potential clients each week. At least 60 percent are Spanish speakers. One referral said that another clinic had a three-month wait for an appointment. Another, a teenager, says she was told she’d have to come in at 11 a.m. and miss school.

Some Chicago mental-health activists are wary of the property-tax strategy. “Is Englewood, where foreclosure rates [are] through the roof, going to pass a property tax increase when people are already underwater paying back mortgages?” Matt Ginsberg-Jaeckle, a volunteer with Southside Together Organizing for Power, asked Chicago Public Radio station WBEZ. He voiced concern that the referendum could perpetuate a “stark disparity in access to mental health services … with certain sections of the city completely left out.”

Coalition activists counter such criticism by noting that the tax increase is relatively small (about $15 for a property assessed at $200,000) and that the law lets communities draw the tax territories to include diverse economic areas.

Sharon Nichols now sits on the board of the Coalition, which hopes to pass referenda in other neighborhoods. Her work on the referendum showed her “the generosity of the people in Chicago,” she says. “You realize how many are really committed to their neighbors.”

Cusac is currently a Social Justice News Nexus Community Reporting Fellow through the Medill School of Journalism at Northwestern University. This article was produced as part of that fellowship.

Anne-Marie Cusac, Associate Professor in the Department of Communication at Roosevelt University, is a George Polk Award-winning journalist. For ten years, she was an editor and investigative reporter for The Progressive magazine. Cusac won the George Polk Award for her article “Stunning Technology,” an investigation of the use of the stun belt in U.S. prisons. Cusac’s nonfiction book Cruel and Unusual: The Culture of Punishment in America, was published by Yale University Press in the spring of 2009 (paperback edition, fall 2010).