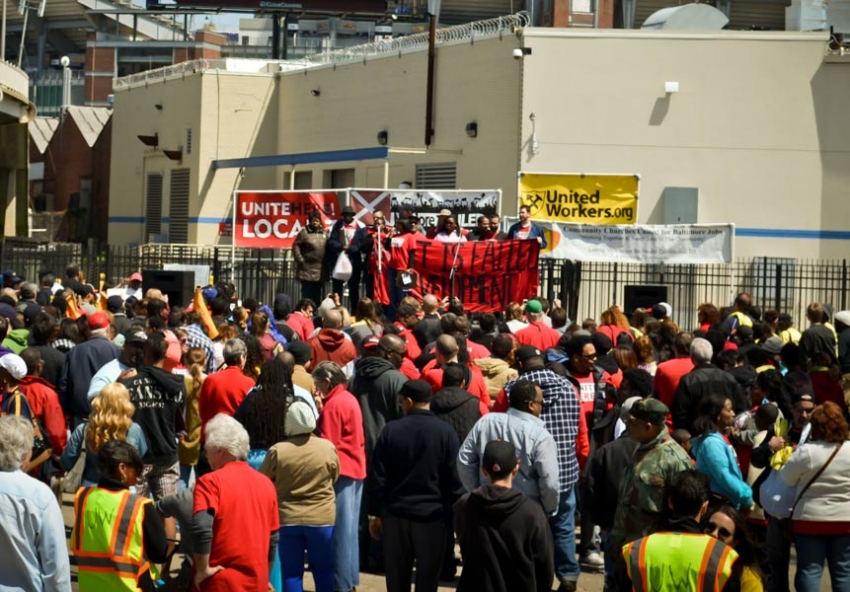 The Wrong Way to Revitalize a City

ALEC’s scheme to take the community out of community development.

With less emphasis on retail and a greater commitment to local needs like good jobs, Buffalo’s Inner Harbor—in theory—will look quite different from Baltimore’s.

The pro-corporate American Legislative Exchange Council (ALEC) has come up with yet another strategy to bolster the power of big business. Republican lawmakers in Michigan plan to introduce an ALEC-backed bill that would ban “community benefits agreements” (CBAs), one of the few options local activists have to fight for equitable development. A CBA is a contract between community groups and developers of publicly subsidized projects. In exchange for community support, a developer might agree to offer quality jobs, living wages, affordable housing or environmental protections. ALEC’s CBA ban, which specifically prohibits a local minimum wage, would be unprecedented.

The contrasting stories of Baltimore and Buffalo, New York, two economically depressed cities that launched ambitious development plans, show what happens to workers and the poor when safeguards like CBAs are–and aren’t–in place.

Baltimore was one of the first U.S. cities to rebrand itself as a tourist and entertainment hotspot in response to the painful post-war impact of deindustrialization and white flight. Beginning in the 1950s, Baltimore poured millions of dollars, through tax breaks and subsidies, into building up its Inner Harbor entertainment district and other attractions. By the early 1980s, these projects were bringing more than 18 million visitors to the city annually, leading many politicians and pundits to proclaim that Baltimore was in the midst of a terrific revival.

But it was never an equitable one. Between 1959 and 1995, Baltimore lost 75 percent of its industrial jobs, and by 2008, the city had lost a third of its population. Despite the tall, shiny buildings and bustling shopping centers downtown, blight and abandonment plague many corners of Charm City. As anthropology professor David Harvey wrote in 1992, “If people could live on images alone, Baltimore’s populace would have been rich indeed.” Instead, in 2012, more than 25 percent of the city lived in poverty, including 37 percent of the city’s children.

Meanwhile, the Inner Harbor is still drawing 14 million visitors a year and remains a point of pride for local leaders. In 2013, the city released plans to build up the Harbor even more over the next few decades. “Anything that’s great for tourists is great for locals,” Tom Noonan, CEO of Visit Baltimore, told the Baltimore Business Journal.

The approximately 1,500 restaurant and retail workers at the Inner Harbor might disagree. In 2011, United Workers–a human-rights organization led by low-wage workers–and the nonprofit National Economic & Social Rights Initiative co-published a report on Inner Harbor’s labor conditions that documented abuses such as chronic wage theft. The report profiled many workers, including Nadja Martens, a server at Hard Rock Café, and Jason Bandy, a server at Capitol City Brewing Company. Both saw big paycheck decreases during the winter months, when tourism was slow and tips were scarce. “During … November, December, January, February, 100 percent of the time I was not paid minimum wage,” said Bandy.

This report was the first investigation of its kind. “The formal measure of success for these public investments [in the Inner Harbor] has been a superficial assessment of whether a rundown area has been ‘cleaned up,’ whether customers are happy, whether businesses and investors are making money,” the report stated. “Job creation has been addressed as a simple matter of quantity–how many jobs are created–not of quality.”

Todd Cherkis, a Baltimore organizer with United Workers, puts it this way: “There’s the myth about the Inner Harbor, and then there’s the reality.”

In 1994, in response to the bleak conditions, Baltimore citizens mobilized the nation’s first grassroots living wage campaign, fighting to establish higher wage standards for businesses that receive government subsidies. The campaign was historic, but activists won a watered-down victory: The new requirements applied only to city contractors, not all publicly subsidized developers.

Since 1994, more than 120 other municipalities have seen their own living wage campaigns, inspired by the original Baltimore activists. One was Los Angeles, which enacted a living wage ordinance in 1997. A year later, LA residents pushed for what would become the nation’s first CBA–a labor agreement tied to an incoming Hollywood shopping mall and entertainment complex. Dozens of cities have since negotiated their own CBAs; 28 were in effect nationwide as of 2012.

The story of the waterfront development in Buffalo, New York, provides a strong contrast to Baltimore’s. In 2004, the state-run Erie Canal Harbor Development Corporation (ECHDC) embarked on a plan to transform Buffalo’s waterways into a Great Lakes version of the Inner Harbor. Using a $350 million grant from the New York Power Authority, the ECDHC planned to give approximately $40 million in public subsidies to outdoor-sporting goods store Bass Pro, to be the anchor tenant, and Benderson Development, to build the retail store.

“When we found out about all this, we were really concerned about the size of public subsidies for private businesses, particularly for Bass Pro, a low-wage employer,” says Andy Reynolds, a communications organizer with the Buffalo-based non-profit Coalition for Economic Justice (CEJ). “We began to learn about community benefits agreements as a best practice, so we started a coalition to launch one of our own.” The result was the Canal Side Community Alliance, a coalition of more than 60 community organizations launched in 2009 to put public pressure on both developers and local political leaders. By 2013, the Canal Side Community Alliance was able to get the state to agree to a CBA. The project is still underway, but with less emphasis on retail and a greater commitment to local needs like good jobs, Buffalo’s Inner Harbor–in theory–will look quite different from Baltimore’s.

To be sure, CBAs are no panacea. If developers do not hold up their end of a CBA agreement, the community coalition must hold them accountable, which in many cases means going to court. Such sustained oversight is challenging and sometimes unsuccessful. And, as Peter Marcuse, professor emeritus of urban planning at Columbia University, writes, “CBAs … often provide only a limited reach for alternative means of making the planning process truly democratic.”

Still, CBAs are far better than nothing, and the fact that they are in ALEC’s crosshairs is a testament to their efficacy. As Matthew Raffol writes in Advocates’ Forum, “By organizing residents of low-income communities and granting them access to development planning processes, CBA coalitions transform these residents from objects of urban development policy to subjects who actively shape development decisions [and] exact a price on private capital that it would not otherwise incur.” In other words, when faith, labor and community groups come together to make demands on municipal projects, they shift the dynamics of urban power and set the stage for further demands.

Hope yet for Baltimore

In April 2013, hundreds of Baltimoreans rallied at the site of the new Horseshoe casino to celebrate a deal that local unions, with the help of Maryland state officials, had brokered with Caesars Entertainment Corp. The 1,200 permanent casino staff would be allowed to organize without management opposition, using a simple-majority “card check” process.

That victory is being used to fuel a push for fair development throughout the city. In October 2014, a new group called One Baltimore United–comprised of labor, faith and community organizations–rallied outside City Hall for higher-wage jobs, improved schools and better public services. “Our goal is to show that the Inner Harbor model is outdated,” says United Workers’ Cherkis. The coalition is keeping a close watch on future development projects and sees CBAs as one tool in its arsenal.

Cherkis expresses cautious optimism: “The landscape to address these issues is definitely changing.”