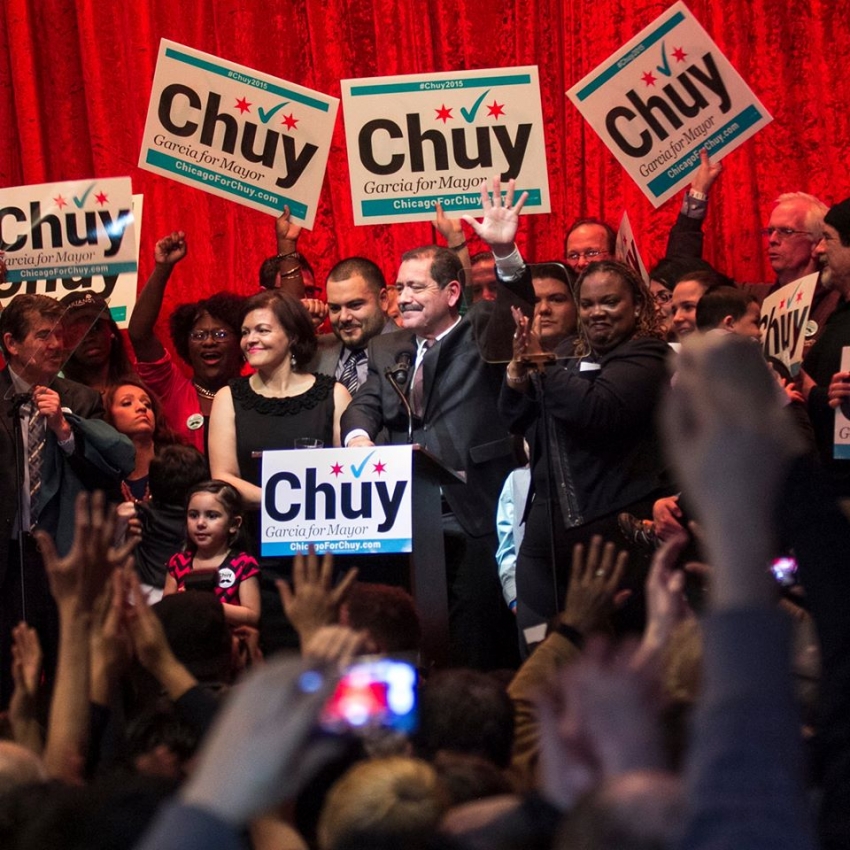 With Chicago Tired of “Mayor 1%,” Chuy García Could Actually Win His Runoff with Rahm Emanuel

While money poured into the recent mayoral and aldermanic elections, voters showed that they are tired of business as usual.

The City Council elections drive home a larger point: that Chicagoans are indeed sick of leadership that caters to private investors and tries to boost Chicago’s international profile while ignoring the needs and the voices of regular people and eroding the public institutions, like schools, that sustain their communities.

“He’s like a helium balloon,” Marcos Muñoz told me last week, speaking about Chicago Mayor Rahm Emanuel. “He keeps rising and rising, and he doesn’t even know he’s popped.”

Muñoz was with Cesar Chavez in the Central Valley in California in 1965, part of a seminal labor movement demanding rights and respect for farmworkers. After a stint organizing for the United Farmworkers in Boston, where he met his wife, Muñoz settled four decades ago in the Little Village neighborhood of Chicago. That’s where he met Jesus “Chuy” García, a political activist with the vibrant, independent movement then pushing for immigrants rights, labor rights and basic services in black and Latino neighborhoods.

Muñoz described how he was skeptical of García at first, but was won over when García joined the grassroots brigade of locals who would sweep the alleys of trash and broken glass.

Last night García made history, forcing Emanuel into the Chicago’s first-ever mayoral election run-off by winning 34 percent of the vote to Emanuel’s 45 percent.

This moment can be seen as a victory not only for Cook County Commissioner García, a Mexican immigrant who still lives in Little Village, but for Muñoz and the countless other Chicagoans who make the city what it is through their hard work, their creativity, their very existence.

The national media and pundits have turned their attention to Chicago in the lead-up to the election, taken with the novelty of Rahm Emanuel—confidante of two American presidents, darling of Hollywood and Wall Street—facing the “embarrassment” of being forced into a run-off by a supposed motley crew of opponents.

Chicago has been portrayed internationally as a symbol of the growing chasm between America’s haves and have-nots, the 1% and the 99%, a “tale of two cities.” The implication has often been that the liberal elite as symbolized by Rahm Emanuel are tone-deaf, that they need to do more to reach out to their black and brown constituents, to acknowledge their gripes and lift more of them into the charmed parts of the city.

What's apparently assumed is that the 1% should stay in power, but do a better job of responding to the 99%, rather than that a true representative of the people should be elected.

Even as recent polls showed that a run-off was likely, there has been little doubt among the pundits, national and civic leaders that Emanuel will ultimately win in the April 7 election. The prevailing sentiment seems to be that this experience will humble Emanuel and perhaps make him a better mayor, more responsive and more aware of the needs and realities of regular people.

But that idea misses the mark.

If Emanuel does indeed win in April, there’s no reason to believe he will be a kinder, gentler or more democratic chief executive. If his mandate to lead is renewed, he’ll have no reason to continue to win over the people of Chicago who expressed their opposition and disapproval in this election. It will be four years before he’s up for election again, and perhaps unlikely he will even seek the seat a third time. And Emanuel is not known as a gracious loser. After he was widely seen as “losing” a standoff with the Chicago Teachers Union that included a seven-day strike in 2012, he came back swinging with the closing of almost 50 public schools and the layoffs of thousands of union members.

The concept worth contemplating now is that García could actually win. It would be a story for the ages. A hard-working Mexican immigrant family, a kid who hangs tough in the face of racism and bullying, who makes alliances across color lines and who joins the dream team of legendary African American Mayor Harold Washington. Who succeeds in politics and yet continues to be seen as a true neighborhood guy and champion of the underdog. Who resisted pleas to run for mayor until Karen Lewis, the outspoken, inspiring teachers union president, recruited him to take her place in this race after she was diagnosed with brain cancer.

Skeptics said that García could not win over enough black and white voters, that he didn’t have enough name recognition, and that he had no hope in the face of Emanuel’s $30 million war chest and endorsement from President Barack Obama.

It’s widely accepted that money and influence rule politics. But yesterday, all Emanuel’s money and connections didn’t snag him a victory. Recent moves like raising the minimum wage, apologizing to victims of police torture and protecting single-room-occupancy affordable housing did not persuade Chicagoans alienated by Emanuel’s closing of public schools and mental health clinics, slashing of city jobs and services, attacking teachers and patronizing parents.

Emanuel has ruled with an arrogance and elitism that is not lost on people like Marcos Muñoz. Unlike other politicians in a state infamous for corruption, there’s no evidence Emanuel has tried to leverage his public role for personal wealth and luxury. But his way of governing could be considered more offensive and damaging than a leader helping herself to the spoils of her office. Emanuel seems to see the whole city as a social and economic experiment, ripe for remaking in his own sleek, efficient image, no matter if many existing residents don’t have a place in the new Chicago.

The run-off would not have happened without Willie Wilson, the multi-millionaire African-American businessman with a seventh grade education. Wilson’s incoherent answers to editorial page questionnaires, down-home monologues and simplistic proclamations made him both a laughing stock and a folksy favorite of some well-educated white voters. His 11 percent of the primary vote might be seen as simple novelty. But it represents the very real and important sense of alienation and anger with Emanuel among African Americans, who have suffered the brunt of his policies even as he has tried to mollify them with often clumsy gestures.

The other African-American candidate in the race, William “Dock” Walls, has been mocked as a “perennial candidate” and non-contender. No matter that his answers in debates and his policy statements often offered more concrete detail and pragmatic thinking than the other candidates.  The idea that someone is a joke because they have the gumption to run for office multiple times without the backing of a political machine should be seen in and of itself as an affront to democracy.

How Wilson’s supporters cast their votes on April 7 will be crucial to the outcome. García’s campaign has stressed his long-time commitment to African-American communities, including his time as Harold Washington’s key ally in the City Council. While Chicago’s racial divisions are in some ways perhaps more bitter and entrenched than in those days, the election offers hope that voters tired of Rahm Emanuel’s rule could still unite behind an alternative vision and style.

The City Council races on February 24 also show the grassroots political upheaval underway in Chicago and bode well for García’s chances in six weeks. Emanuel’s well-funded PAC failed to unseat any progressive aldermen, although vocal mayoral critic John Arena was forced into a run-off, after a brutal campaign including ads by a school reform group tied to Emanuel blaming Arena for the closing of mental health clinics that Emanuel himself in fact orchestrated. The other alderman Emanuel had targeted with particular vigor, Scott Waguespack, won in a landslide. And a non-binding referendum for an elected school board, as opposed to Emanuel’s hand-picked board, got overwhelming support in all 37 wards where it appeared on the ballot.

At least five independent candidates backed by labor unions and progressive coalitions pushed incumbents into run-offs. One such candidate, Carlos Ramirez-Rosa, easily won a seat outright in a ward that also featured a wide margin of victory for García. Chicago’s City Council has long been known as a rubber stamp for the mayor, with very few aldermen ever voting in opposition to him. However, even the influx of independents doesn’t guarantee progressive legislation will get passed, since ordinances not supported by the mayor are typically buried in a committee without ever being called for a vote.

But the City Council elections drive home a larger point: that Chicagoans are indeed sick of leadership that caters to private investors and tries to boost Chicago’s international profile while ignoring the needs and the voices of regular people and eroding the public institutions, like schools, that sustain their communities.

Rahm Emanuel’s stance on the Obama presidential library is one of the many examples of this attitude. Locals made it clear that they do not want large swaths of their beloved public parks on the South Side taken over for the library. But even during a campaign where he desperately needed the approval of these voters, Emanuel brushed aside their concerns in his haste to please the University of Chicago—whose library bid depends on the park land—and secure the national prestige attached to the library.

At Karen Lewis’s petition-gathering launch last summer, I talked to many African-American voters who said they voted for Rahm Emanuel the first time around because of Obama’s endorsement. But, they all said, even Obama wouldn’t convince them to back the mayor now. Chicago has a long and curious history of people seeming resigned to retaining the mayor—namely, the two Richard Daleys who ruled for 43 years combined—despite widespread disillusion and disapproval. The feeling seemed to be that at least Daley could run the place. But the February 24 election indicates Chicagoans have reached their limit in terms of tolerating the daily inequities, humiliations and injustices meted out by this administration, from red light camera tickets to closed schools to corporate giveaways.  A message was sent that the masses cannot be ignored, insulted, abused and then won over at the eleventh hour with platitudes and token gestures.

Before the election, Muñoz declared that García was “already a winner” because of the way he’d canvassed the city listening to the concerns of regular people. The run-off poses a new challenge to García, the City Council candidates and the people of Chicago. Displeasure with the incumbents has been made clear, by the February 24 results and also by the very low voter turnout, of around 33 percent. The next six weeks will provide a critical referendum on whether people really want to “take back” their city, and give García and other independents the chance—beyond listening and criticizing—to begin the hard work of building a city that works for everyone.