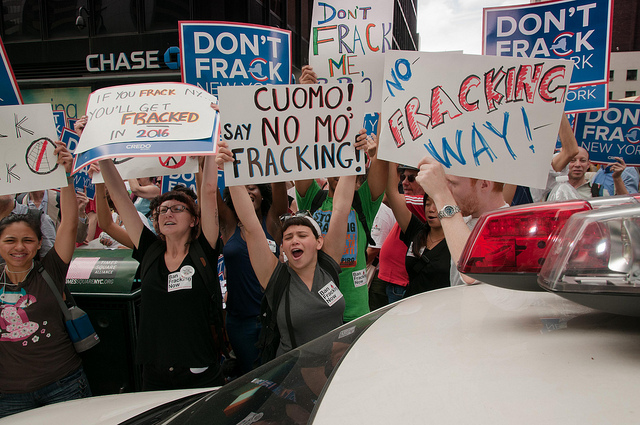 Anti-fracking forces not only pushed a right-leaning Democratic governor to pass the ban, but proved the conventional wisdom—that a ban would be impossible—wrong.

“For too many years, mainstream environmental organizations have been beaten down by our nation’s politics,” says Wenonah Hauter, Executive Director of Food & Water Watch. “If we’re going to create the world we want, we need to have the courage to fight for that vision.”

On December 17, years of relentless organizing culminated in the administration of Gov. Andrew Cuomo announcing a ban fracking in New York.

In winning this historic victory, we defeated the oil & gas industry, with its massive financial clout and political influence. We also undermined the conventional wisdom that a ban was not feasible—a sentiment widely held by political insiders but also by many green groups who easily conceded that fracking would be permitted.

As Ling Tsou, co-founder of United for Action, a New York City-based grassroots group that fought for a ban, noted, “The mainstream environmental organizations thought the best we could get were good regulations and thought we were crazy.”

But thousands of “fracktivists” like Tsou persevered, and against the odds, with a combination of smart strategy and lots of hard work, banned fracking in New York. Here is how we did it.

We built a massive movement

The top layer was New Yorkers Against Fracking (NYAF), a coalition that helped unify the national, state and grassroots organizations calling for a statewide ban, ultimately comprising more than 250 organizations.

“NYAF was a megaphone,” says Sandra Steingraber, the noted biologist and author who helped found the coalition.

It amplified a base of anti-fracking voices that included local groups formed to fight fracking in their communities — 180 municipal bans and moratoria were passed across the state.

NYAF strengthened that base in several ways. First, we put organizers on the ground in regions from Long Island to Buffalo. These organizers were essential to growing our grassroots power as well as mobilizing people for actions, such as bus trips to Albany for rallies at the Capitol.

Third, NYAF enabled collaboration and coordination of tactics and messaging among the numerous strands of the movement that spanned the state. Resources were both maximized and put to more effective use because everything from letters to the editor and op-ed pieces to rallies, call-in days and petition drives were planned together.

As Alex Beauchamp, Northeast Region Director for Food & Water Watch, notes, “Too often, organizations try to win these battles in the halls of the capitol, but we put our resources into building and mobilizing power where it could have the greatest impact—at the grassroots.”

We demanded what we wanted

“Ban fracking now!” was our rally cry, and steadfast allegiance to this demand was critical to maintaining the movement.

“I live on the shale where fracking would have occurred,” says Jill Wiener, a member of Catskill Citizens for Safe Energy. “From the very beginning, there was zero way that I thought regulation could work for this industry.”

It was this sentiment that bound together New York’s anti-fracking movement, and the commitment to it that sustained so many people for so long.

Tsou noted that many of her activist friends were disillusioned by the battle for health care reform and the failure to call for single-payer health care—and they were determined not to repeat that kind of mistake. “We needed to ask for what was really the right thing.”

Karen Scharff, Executive Director of Citizen Action of New York, says, “There were so many times when the Cuomo administration offered different versions of compromises, thinking they could divide people, but the coalition stuck with its demand.”

One such instance occurred when the administration, having already proposed banning fracking in the New York City and Syracuse watersheds, floated the idea of pilot projects in the state’s Southern Tier. But the movement immediately squashed that notion, insistently demanding at rallies, in press statements, and in social media, “Not one well!”

At one memorable coalition meeting, a colleague pounded his fist on the table, declaring that our strategy should be “Cuomo, Cuomo, Cuomo!” Indeed, we were laser-focused on pressuring Governor Cuomo, providing cohesion to the movement and its tactics and messaging across the state.

It’s an organizing maxim that you can’t take on City Hall, but you can take on the mayor. We were committed to the notion that we had one decision-maker who we should direct all our energy towards and his name was Andrew Cuomo.

It made sense. Cuomo once infamously told the New York Daily News, “I am the government,” and it is widely understood that all important decisions—and many unimportant ones, too—are made by him.

Legislative solutions, an easy distraction, were given little attention, part of a process that, as Scharff noted, inevitably leads to compromise.

“There were many times where Cuomo tried to shift the role of decision-maker to other people—or at least create the appearance of doing so,” says Beauchamp. “But we were very disciplined in maintaining our focus on him.”

We labored with a constant sense of urgency that the Cuomo administration could announce a decision on fracking at any moment—and that it might be a bad one.

As the Cuomo administration dragged out its decision, ultimately taking nearly four years, we took advantage of every moment. The movement engaged in scores of conventional tactics to influence Cuomo—generating hundreds of thousands of petitions and public comments, making thousands of phone calls, publishing hundreds of letters to the editor. At the same time, we cultivated new supporters through countless film screenings, distributing thousands of leaflets and canvassing businesses, churches and other institutions.

But our signature tactic was “bird-dogging,” the practice of establishing a presence at a political target’s public appearances.

“You have to show up in person,” said Tsou. “Cuomo realized that everywhere he went, he’d be met by fracktivists.”

At an event in Manhattan to launch Cuomo’s book, there were hundreds more anti-fracking protesters than book-buyers. On Primary Day, we held signs at his polling location in Westchester, and a clearly impressed Cuomo acknowledged to reporters the vitality of our movement, mentioning that his daughter once joked they must have arrived at the wrong event if there were no fracking protesters there.

Always secretive with his schedule, Cuomo became even more so when we began bird-dogging him. Another problem was when Cuomo started canceling public appearances because of us. There were numerous instances when we had mobilized crowds and he didn’t show up – but this phenomenon was reported in the press and was a sign that our presence was having an impact.

“It was really important that the coalition adopted tactics that were energizing and inspiring for the grassroots, enabling them to have their voices heard and feel the movement growing,” Scharff says.

We made it about health

Among our most important accomplishments was defining fracking as a threat to human health, a challenge given the initial lack of attention to the issue by the Cuomo administration.

“The word ‘children’ doesn’t appear in the state’s draft environmental impact statement,” notes Steingraber. “Nor does the word ‘pregnancy’.”

Again, we were helped by the passage of time. “The data on health got worse, the peer-reviewed health studies came out, and what we learned was damning,” Beauchamp says.

Fracking’s threat to the safety of our drinking water was a visceral concern that was easily understood. Tsou, who spent countless hours with fellow activists doing public outreach, says, “It’s really the water that draws people in.”

New York’s proximity to Pennsylvania enabled us to organize bus tours of fracking sites there, allowing elected officials, faith leaders and others to learn first-hand from affected families about fracking’s health impacts.

Ultimately, said Steingraber, “The movement carried the science into the public arena.” Concerned Health Professionals of New York played a key role in compiling and publicizing the emerging science around fracking. Cuomo determined that the health commissioner would pick up where his environment department had left off, reviewing the current literature. And so it was on December 17 that it was Cuomo’s health commissioner who announced that fracking would be banned in New York.

“For too many years, mainstream environmental organizations have been beaten down by our nation’s politics,” says Wenonah Hauter, Executive Director of Food & Water Watch. “If we’re going to create the world we want, we need to have the courage to fight for that vision.”

In New York, we had that courage—and we backed it up with the organizing that built the power to make that vision a reality. As Scharff says, “The biggest lesson here is the power of grassroots organizing and the power of relentless grassroots mobilization. The fact that the governor couldn’t go anywhere in the state without hearing from us worked.”

Eric Weltman is a senior organizer with Food & Water Watch. He lives in Brooklyn.