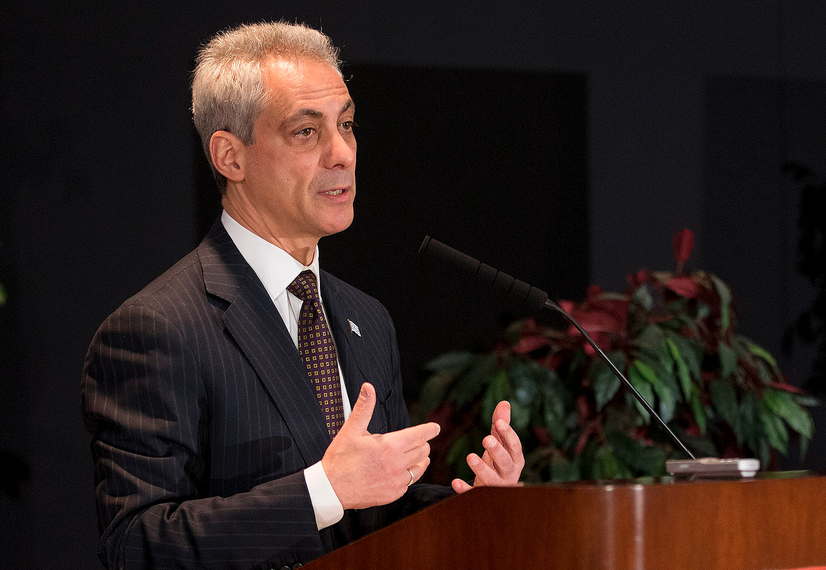 The incident came almost three years to the day that another activist died after her mental health clinic was closed by Mayor Emanuel.

“Not during a single [mayoral] debate did anyone ask” about the issue, he says. “It’s a last minute opportunity to finally get the candidate talking about this.”

Mayor Rahm Emanuel’s recent attempts to soften his image may be overshadowed by recent allegations that Emanuel screamed in the face of two mental health activists who confronted him about his closure of half the city’s mental health clinics in 2012—but only after he was able to get them behind closed doors.

Matt Ginsberg-Jaeckle and Debbie Delgado, activists with the Mental Health Movement, confronted Emanuel in a public meeting Wednesday night about the impact of the clinic closures.

In a video of the encounter taken by Ginsberg-Jaeckle, Delgado describes the personal impact of her clinic being closed, and the difficulty her family has had dealing with her son’s shooting death after their mental health clinic was shuttered, to a straight-faced Emanuel.

“Three years ago, you closed our clinics down. My son was getting help. Now they diagnosed him as major depression,” said Delgado.

“After trying to keep his cool, he told us that he would speak to us after the event in a separate room. There, Debbie and me saw the Real Rahm. Now off camera, Rahm's voice raised, his demeanor changed, in no time he was shouting in my face, nose-to-nose. … “YOU'RE GONNA RESPECT ME!”….

“The Real Rahm accused Debbie and me of “creating a circus in there,” to which we responded that two close friends - Jeannette Hanson and Helen Morley - had lost their lives because of his decision to close their clinics.”

Speaking to In These Times, Ginsberg-Jaeckle said it was “poetic justice” that Emanuel would be under pressure for his decision to close the clinics almost three years to the day a Mental Health movement activists told Emanuel she would die if he closed her clinic. Helen Morley passed away in June 2012.

“We’ve been waiting for three years for this moment, for him to come face-to-face with the decisions that he has made,” said Ginsberg-Jaeckle.

The mayor’s office has denied that Emanuel screamed at the activists. A statement from his chief of staff to the Huffington Post said “Rahm’s 15-minute private meeting ended very cordially.”

But it’s not the first time he’s been accused of exploding at a critic. In 2013, journalist Michael Hastings said Emanuel responded to an uncomfortable question by: “attempting to berate me, then grabbed me, while his bodyguards approached.” That interaction was caught on an audio recording.

The story has reverberated throughout national media. Ginsberg-Jaeckle said he will be appearing on NBC Channel 5 on Thursday evening to discuss the encounter. He told In These Times Thursday afternoon that, according to NBC Channel 5, the Emanuel campaign had dug up his arrest record in an ostensible attempt to discredit him.

To Ginsberg-Jaeckle, the conversation is long overdue.

“Not during a single [mayoral] debate did anyone ask” about the issue, he says. “It’s a last minute opportunity to finally get the candidate talking about this.”