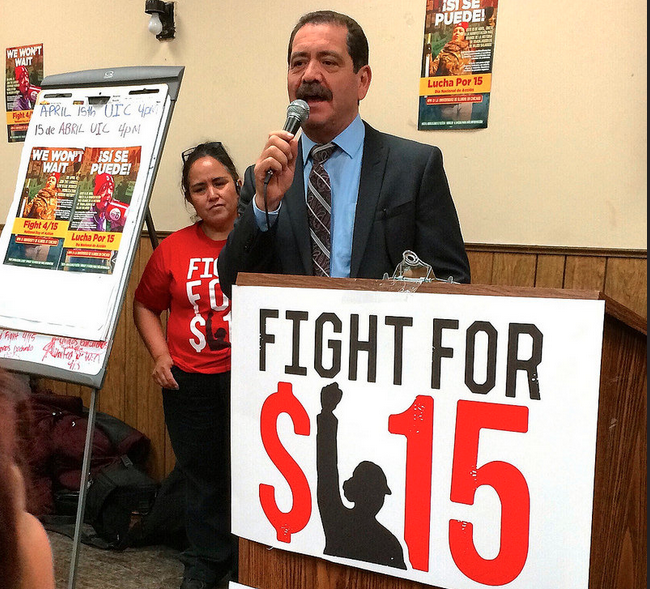 What Has Jesus “Chuy” Garcia Actually Accomplished in Office? A Lot, It Turns Out.

It’s not just that Rahm Emanuel has devastated Chicago through privatization and corruption—Chuy Garcia has a strong record of smart progressive governance.

Jesus “Chuy” Garcia is going to be a great mayor. He’ll do what Rahm only claims to do: make the tough choices a battered city needs. Only he’ll do it with the interests of all Chicagoans in mind.

It’s week three of the most historic mayoral election in Chicago in decades, and new indictments of the incumbent (on top of the prodigious number of old ones) have been rolling over a largely undecided electorate in waves:

• Last Tuesday, the International Business Times reported how Rahm Emanuel’s top congressional aide was hired as a lobbyist for the company from which Chicago bought $44 million worth of red light cameras; the relationship was cunningly hidden from disclosure requirements.

• On Wednesday, Emanuel allegedly snapped Tony Soprano-style to a woman who lost her son to gun violence, “You’re gonna respect me!” after she pressed him for an explanation about why he closed the city mental health clinic that had treated her for post-traumatic stress disorder.

• Thursday, public radio station WBEZ and the education magazine Catalyst Chicago documented how one of Emanuel’s appointed school board members, Deborah Quazzo, might have profited off the $60 million Chicago Public Schools has poured into sketchy, unaccountable, online “alternative schools” which do more to artificially inflate the graduation rates than they do to actually help at-risk kids.

That’s on top of one of the most politically damaging developments of all: the fifth downgrading of Chicago’s bond rating since Emanuel’s inauguration, this time to just two notches above “junk.” “Rahm Emanuel’s Chicago Nears Fiscal Free Fall,” Investor’s Business Daily headlined that news.

To the majority who voted against Emanuel in the first round of the mayoral elections on February 24, this probably came as welcome enough confirmation of their judgement. Others, though, are asking the reasonable question: What’s Rahm’s opponent Jesus “Chuy” Garcia done to prove he’s up to the job of governing the third largest city in the nation?

Actually, it’s not a hard case to make—and the heart of it is that very financial free-fall. When the Chicago Tribune endorsed Emanuel for reelection, their argument was almost entirely fiscal: “He has kept spending in check”; “He has balanced the budget four years in a row”; “He passed reforms in Springfield to the municipal and laborers pension funds.”

The Chicago Sun-Times argued similarly: “For months, Rahm Emanuel has kept his feet flat on the ground, addressing Chicago’s very real problems despite the political fallout, while his opponent in the April 7 mayoral runoff election, Jesus ‘Chuy’ Garcia, has floated above reality.”

Leave aside how Moody’s, which specified the irresponsibility of Emanuel’s alleged pension fix as a key justification for their move, has just humiliated those claims. Let’s talk about Chuy—and how talk like this betokens the Chicago establishment’s own flight from reality.

As the savvy and level-headed Curtis Black explained in the Chicago Reporter, “The reality is, Emanuel has a record of fiscal recklessness, and Garcia has been a key member of the two most fiscally responsible administration in recent history.” It was the mayoral administration of Harold Washington’s, with Garcia as a key aldermanic ally, that trimmed the city’s patronage-inflated workforce by 15 percent and, a year before his decisive 1987 reelection, raised property taxes taxes by double digits. (Emanuel, the guy the Trib and Sun-Times claim has the courage to support tough decisions, used that 1986 city council by Garcia vote as a political attack.) More recently, Chuy has been floor leader for Cook County Board President Toni Preckwinkle, when she balanced the county budget for the first time in years while also lowering taxes.

Budget messes are a tough issue for progressives. Solving them often seems to demand austerity measures—just the kind of austerity measures mandarins like the Chicago Tribune’s editorial board enshrines as the sine qua non of political courage—that hurt the most vulnerable. But they do not have to. Preckwinkle, with Garcia as her deputy, achieved her balanced budget while maintaining the loyalty of most progressives. That makes mincemeat of the arguments of the big Chicago papers—and also that of the Washington Post, in a March 6 love letter to Rahm, who claimed the mayor “opted for the general welfare over special interests and as a result incurred their wrath.”

Such arguments notch perfectly with Emanuel’s talking points. As a mayoral spokesman said in response to a poll showing the runoff was a statistical dead heat, “Garcia, who has failed to get much of anything done in nearly 20 years on the big issues facing the city, but who is all of a sudden making pie-in-the-sky promises and writing checks Chicago can’t cash.”

Which is just the kind of cliched insinuation you might expect to hear when the politician in question happens not to be white.

It was Illinois’s Republican senator Mark Kirk who came closest to going there. At Pulaski Day ceremonies last Monday, he absurdly asserted, “Rahm’s reelection is essential to maintaining the value of Chicago’s debt market. … It’s a concern if we have some of the less responsible people running against him.”

Understand: at the time, there weren’t “people” running against him, there was a person: the Mexican-American immigrant Chuy Garcia.

The racial overtones in his reference to “those people” was made crystalline by his next statement: “None of them could command the respect of the bond market. A collapse of Chicago debt, which already happened with Detroit, I think would soon follow if somebody who was really inexperienced and irresponsible replaced Rahm.”

Expect more provocations like that as campaign unfolds. Also, expect Garcia not to take the bait.

One of most impressive things about Garcia is how effectively he’s been messaging in response. In contrast to the blustery Emanuel, his digs have been subtly, quietly devastating:

• On Emanuel’s kabuki attack against the first budget from the new Republican governor (he’d thundered, “Do not think you’re gonna do this—not only on the backs of families and children, but on the resources that … pay for our police and firefighters and first responders,” Garcia responded, “He and Rauner are good friends. They apparently share expensive wines together. They talk on a very regular basis. I’m sure the mayor had advanced notice that these cuts were coming down. The mayor should have ensured that the governor wouldn’t have the audacity to even think about draconian cuts.” That one not only tied Rahm to the tail of a rich Republican, it effectively frames the supposed tough guy as politically weak. Another home run.

• “When the school closings were announced, he was out of town. You don’t do that in Chicago.” He’s running against a man who grew up in suburban Wilmette, in a campaign propped up by millions in out-of-town money in a city that prefers its heros to be homegrown (it took the now-beloved former congressman Abner Mikva decades to establish his bonafides in town, because he was born in Milwaukee). This one was a grand slam.

Given the severe privation of his campaign funds—he raised a little more than $1 million in the first round, compared to Rahm’s nearly $30 million between his own campaign fund and his political action committee—it must not be on the advice of fancy consultants. This man has political skills. He also has the solid core of a guy who grew up knowing what it really means to be tough.

Jesus “Chuy” Garcia is going to be a great mayor. He’ll do what Rahm only claims to do: make the tough choices a battered city needs. Only he’ll do it with the interests of all Chicagoans in mind.