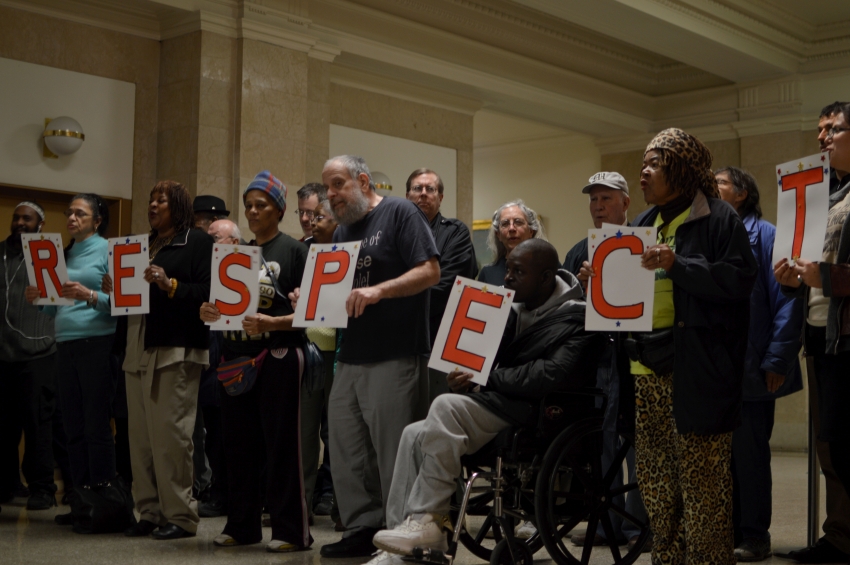 Activists say the mayor has yet to reckon with the effects of his mental health clinic closures.

Until Delgado and Ginsberg-Jaeckle’s confrontation with Emanuel, mental health care had remained on the periphery of the mayoral campaign and advocates have been attempting to draw officials’ attention to the dire need of psychiatrists at the remaining city clinics for months.

A week after coming face-to-face with what activists say is Rahm Emanuel’s crueler, more aggressive side, advocates from Chicago’s Mental Health Movement gathered at City Hall demanding “respect” from the mayor.

On March 3, Mental Health Movement members Debbie Delgado and Matt Ginsberg-Jaeckle confronted Emanuel during a neighborhood campaign stop in Wicker Park. Delgado stood up in front of the gathered audience and related her experience with the Northwest Mental Health Clinic. After losing one son to gun violence, she and her other son received what Delgado described as invaluable support at the city clinic, which closed in 2012. Ginsberg-Jaeckle filmed the encounter.

While Delgado told part of her story, she and Ginsberg-Jaeckle were nearly escorted out of the meeting by the mayor's staff. Mayor Emanuel began responding by saying that “to govern is to choose” and quickly pivoted to speak about neighborhood playgrounds. Later in the meeting, he referenced his own congressional actions on mental health parity but never publically addressed the clinic closures.

“He started getting angry, his voice was completely different. He said, ‘You guys were clowning around in there. Now we can get to the real issue!’ I said we didn’t consider this clowning around,” he said. “We’ve lost people that we’re close to because of these closures. He got about an inch away from my face, shouted three times: ‘You’re gonna respect me!’ ” The incident came only days after the Emanuel campaign rolled out an ad trying to soften the mayor's image, showing him speaking in a soothing voice and admitting that he can “rub people the wrong way or talk when I should listen.”

Yesterday, Ginsberg-Jaeckle and other members of the Mental Health Movement, a group of clients from the city clinics as well as mental health advocates from around Chicago, demanded Emanuel’s respect right back. About 35 people gathered on the fifth floor of City Hall, in front of the entrance to the Mayor’s office, and held up red letters spelling out R-E-S-P-E-C-T while singing a rendition of Aretha Franklin’s “Respect.”

The activists asked the mayor to consider the impact of the clinic closures on low-income Chicagoans living with mental illnesses. In a series of speeches, former clients of closed clinics and current clients of those that remain open spoke of the value of these services.

Speakers N’Dana Carter, Diane Adams, Linda Hatcher and Andrea Moore have recounted their stories on many public occasions and have become spokespeople for the lived experience of losing a mental health safety net. In times of personal crisis, they all said they found support and reliable healthcare at the city clinics—while also saying they have seen two friends die soon after their clinics closed.

“[Emanuel] demands respect but he gives none,” Carter said. “We [want] this to be a city where everyone can live. Keeping the services of public mental health clinics available to everyone helps people live.”

Darrius Lightfoot, a youth organizer for Southside Together Organizing for Power (STOP), recounted the lack of treatment for his traumatic experiences in Woodlawn, one of the city’s poorest and most violent neighborhoods on the South Side near the University of Chicago. “I lost my brother in 2010, I lost many friends before then. I have seen my friends’ bodies lying on the sidewalk, without breathing, eyes open, rolled to the back of their heads. People who I knew for seven to 10 years, I seen them on the sidewalk dead. I seen them laying there in blood.”

Woodlawn was where one of the city’s oldest and most highly-attended clinics closed in 2012. (STOP led an occupation of the clinic that year which led to 23 arrests.) “I have not had the chance to go in there and say, okay, I might have an issue. Maybe I would have to go get diagnosed for PTSD or any other kind of illness,” Lightfoot said. “I’ve seen so many people die, and I’m pretty sure a lot of youth my age, younger than me, have that same story.”

Debbie Delgado, who has also shared her story at multiple public gatherings, did not come to the event.

“Debbie’s now having nightmares about Rahm Emanuel screaming and following her,” said Ginsberg-Jaeckle. “She just had a panic attack today. I’ve been on the phone with her all day long. She might be hospitalized right now. She was going to an emergency room right away to see if she can get extra anxiety medication. These are the real consequences that people are living through.”

Until Delgado and Ginsberg-Jaeckle’s confrontation with Emanuel, mental health care had remained on the periphery of the mayoral campaign. Advocates have been attempting to draw officials’ attention to the dire need for psychiatrists at the remaining city clinics for months.

On November 12, members of a consumer group from the North River Mental Health Clinic gathered at the Department of Public Health to ask for the immediate hiring of a psychiatrist at their clinic. When Dr. Sylvia Santos retired from her full-time position as a psychiatrist there last July, clients were left with one month’s worth of medications. They then had to refill their prescriptions elsewhere. Some resorted to visiting the emergency room.

On that occasion, CDPH press officer Brian Richardson rebuffed the advocates. They headed to the mayor’s office to ask for an audience with Emanuel. After speaking outside the office, the advocates were met by Emanuel’s press aide Chloe Rasmas. She accepted their letter and copies of all the emails the group had already exchanged with the health department related to the disappearance of psychiatric services.

To date, five of the six remaining mental health clinics are served by three psychiatrists, none working a full five days per week at any location. The Englewood clinic has no psychiatric services at all.

On Tuesday, Rasmas again came out to see the advocates, though this time she did not share business cards with her name on them.

When the Mental Health Movement filed Freedom of Information Act (FOIA) requests with the Health Department, they say they discovered that Emanuel’s $2.3 million mental health budget cut did not lead to the expansion of services, as the mayor has asserted.

“Of that $2.3 million, he took $500,000 and gave it in small grants to private providers,” explained Ginsberg-Jaeckle. He says that information from city documents released through FOIA requests have not revealed how many city clinic consumers were able to receive mental health services from the private providers. Since the day Emanuel announced the clinic closures, he says, the city’s mental health client rolls were reduced by 3,000.

“To say that you’ve expanded anything is just a boldfaced lie,” Ginsberg-Jaeckle said. “Private providers are not substitutes for the safety-net services of the city clinics.”

To make a point of what it would cost to re-open the six shuttered clinics, advocates signed cards with two pennies taped to each. “We’re going to give him money to help him open and fund the public mental health clinics,” Carter said as she handed off the pennies to Rasmas. By the Mental Health Movement’s estimations, it would cost just two cents per taxpayer per week.

As the advocates continued to sing, chant and share their stories with the gathered press, no one else came out to greet them from the Mayor’s office. Six police officers in bullet-proof vest milled about in front of the door, and staffers rushed by without glancing over at the crowd, shouting call-and-response style, “What do we want? Respect! When do we want it? Now!”

Maya Dukmasova is a writer based in Chicago. She runs a blog devoted to public housing issues and a second one for her daily street photography. Her articles and translations have appeared in Harper's, Jacobin, the Chicago Reader, and the Chicago Tribune. Follow her on Twitter: @mdoukmas.