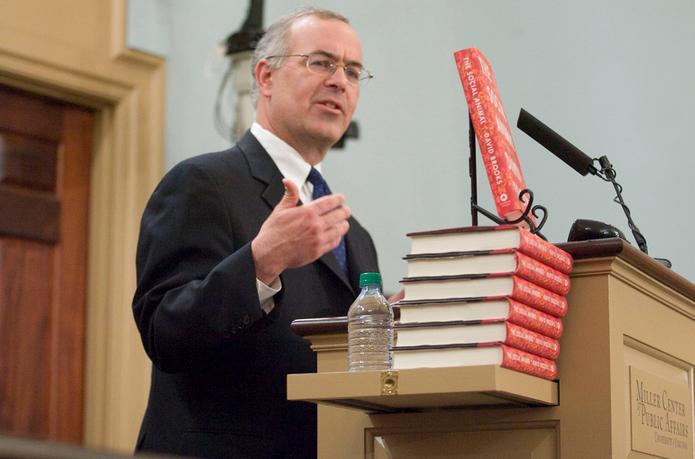 On David Brooks and the “Moral Failures” of the Poor

We aren’t bereft of morals, as Brooks argues—we are plagued with bad ones that blame the poor for their own condition.

There is a moral failure at the bottom of American poverty—but this failure does not belong to its own victims.

David Brooks believes that the hardships of poverty are the wages of sin. He calls it “The Cost of Relativism.”

In Tuesday’s New York Times, Brooks discussed the recent publication of Our Kids by Robert Putnam, the Harvard social scientist most famous for his book Bowling Alone. Our Kids, according to Brooks, is one of those books that has become so necessary under the idolatry of data, the kind that gives empirical credence to what any fool could’ve guessed: in this case, it is that the children of America’s poorer high school graduates fare far worse than those of well-off college grads.

Brooks’s column, meanwhile, is one of those little essays that have become inevitable in the era of his implacable employment, the kind that lends the comfort of confirmation bias to what Brooks already believes—in this case, that the root of the American underclass’s supposed dysfunction is the moral failures of the impoverished.

Brooks knows that life for America’s poor is becoming worse. But he does not believe that sympathy, strong social welfare policies or increased wages can constitute a cure. Rather, he sees the desperate minds of his generation “destroyed by a plague of nonjudgementalism”; starving for the return of “norms” to “hold them responsible.” “There are no basic codes and rules woven into daily life,” he says, and it is this absence—the refusal of society “to assert that one way of behaving [is] better than another”—that has brought about the declining quality of life for America’s poor.

“People got out of the habit of setting standards or understanding how they were set,” he writes. If only the least among us possessed enough moral courage to ask themselves tough questions. If only they could consider whether they’re living “for short-term pleasure or long-term good,” “for yourself or for your children,” whether they “have the freedom of self-control” or are “in bondage to [their] desires.” If only the poor were beacons of virtue—then perhaps their children would have a shot at the American Dream.

I am not surprised that David Brooks believes these things. I am not surprised that he argues for them with the kind of half-hearted bluster of a crank at last call, more tired than drunk on his own posturing. Reading between his lines these last few years, all I can see is “somebody please put me out of my misery” scrawled over and over on a prison wall. I imagine Brooks is as eager as anyone to discover how long this strange self-parody can last before an editor catches on. I comfort myself by believing that this is the secret curiosity guiding David Brooks these days.

Rather, I am concerned with how pervasive his logic of moral decay is in American life—not only on the Right, where we expect it, but in the celebrated good intentions of erstwhile “liberal” causes, in the programs of Democrats who ostensibly represent our viable near-left. I am concerned with the notion that the principle failure of poor parents is that they aren’t enough like middle-class ones.

It is this idea that leads initiatives like Too Small to Fail, a nonprofit nominally led by Hillary Clinton, to spend significant sums of money buying bus banners and radio ads telling poor parents to read to their children—as if this is what will solve the educational achievement gap; as if “reading to your children” was principally responsible for higher test scores, despite the wealth of data demonstrating over and over that wealth and poverty are the strongest determining factors in American children’s educational achievement (when as little as a few thousand dollars cash given to the parents of poor children can push as many as 10% of them over the threshold to a collegiate future). No, Too Small to Fail says, the trouble is that poor parents don’t have the habits of rich ones.

It is this idea, too, that allows even President Barack Obama to advocate “responsibility” and “fatherhood” among black parents as a cure for what ails them—as if, despite being more involved in the lives of their children than any other demographic of single parents, the thing holding back our black underclass is the breakdown of Brooks’s “basic codes” and not the systematic plunder of their wealth over the course of centuries. It is what allows him to recognize the growth of income inequality in one breath while insisting that a little free community college will meaningfully impact it. As if median income didn’t divorce itself from productivity a generation ago, and had the two metrics remained together, the difference would be $40,000 per year, per median family. No, it’s only that poor Americans are doing it to themselves through a lack of moral fiber.

It is this idea that animates commentary on the condition of Chicago, where we are presently enduring a mayoral election wherein the incumbent Democrat Rahm Emanuel insists his closure of 49 public schools was a necessary response to the schools’ low test scores and the fact that these campuses were “underutilized.” As if it’s only an unhappy accident that 90% of the students so affected were poor and black or Latino.

It would be one thing if we didn’t recognize the problem of American poverty. It would be easy if the moral scolding of our poor were confined to one section of our polity. Then we might pursue the many avenues of fiscal and monetary policy available to us. But among even those whose rhetoric suggests an awareness of the situation, even those who know that to be born monied in America is to be heir to a self-fulfilling prophesy of the kind of “good” behavior Brooks is crying out for, are so easily seduced by a reversal of effect and cause.

But out here, poor parents, poor kids and poor schools don’t have the luxury of indulging Brook’s harmful, costly relativism. They live by the most inflexible “code” of our national life: If you’re poor, you’re on your own. Good luck. Oh, and we’ll be watching. Future pay will reflect performance.

Brooks finds some empathy in the end. “Every parent loves his or her children”, he writes. “Everybody struggles. But we need ideals and standards to guide the way.”

I can’t disagree. But the thing is, we’re not operating without standards. We’re not without the unconscious rules, absorbed and followed, that David Brooks desires. We aren’t bereft of ideals. Rather, we are plagued with bad ones—that discipline is proved by wealth, that the ideas of middle class luxury help children more than material wealth.

A better set might be the kind that makes the elected, empowered, ostensible advocates of America’s poor ask “tough questions” about their culpability in the condition of “our kids.” The kind that recognizes that there is a moral failure at the bottom of American poverty—but this failure does not belong to its own victims.

Emmett Rensin is an essayist in Chicago. His previous work has appeared in the New Republic, Vox, The Atlantic, the Los Angeles Review of Books (where is a contributing editor) and elsewhere. Follow him on Twitter: @revemmettrensin.