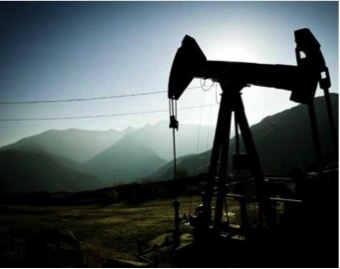 When a chick is born, field workers often rappel to the nest and clean it of microtrash. if an egg is not viable, they will try to swap it with one from a zoo.

Nancy Mauthe remembers walking along the Sespe Wilderness in the early 1980s and wondering if she would ever see a California condor there again.

In 1982, there were only 23 wild condors left in the world. The majestic species—with the largest wingspan of any North American bird—was nearly extinct. Lead and DDT poisoning, habitat destruction and poaching had crippled the population.

The condors have made a slow comeback, aided by more than $60 million in federal and private funds. Today, there are 230 condors living in the wild, but the species still teeters on the edge of survival.

Now, a new report suggests that the condors may face another enemy.

“Well-stimulation treatments could cause displacement or mortality of fish and wildlife,” reads the document. “Well-stimulation” includes hydraulic fracturing, aka fracking, the practice of blasting water, sand and chemicals into a well to crack underground rock and extract more fossil fuels. For most species, “displacement, mortality or injury would not cause populations to drop below self-sustaining levels,” the report says. “However, adverse effects to listed or fully protected species could jeopardize the population viability.”

Condors stand out in the state document. “Due to its state and federal endangered species status, large home ranges and curiosity, the California condor is the most important special-status bird that could be found on well-stimulation sites,” the report notes.

It specifically cites the risk fracking poses to the birds in the Sespe Condor Sanctuary, which has been federally designated a “critical habitat” for condors, meaning it is essential to the species’ conservation. The Sespe, the only sanctuary for the birds in the world, is home to more than 60 condors, one of the largest wild populations.

How safe a sanctuary?

The 53,000-acre Sespe Condor Sanctuary juts out of Southern California like a closed fist. Oaks and chaparral stud the sandstone. The sanctuary is part of the Los Padres National Forest, which stretches along much of the mountainous coast from Monterey to Ventura.

It’s also the address of a large oil and gas operation—there are more than 300 active wells in the Sespe. Most of the 16,000-acre oil field is within the national forest, and about 1,000 acres lie inside the sanctuary. Seneca Resources Corporation, the oil company responsible for most of the drilling in the Sespe, also has 12 injection wells here, which it uses for fracking and for disposal of fracking wastewater. Recent investigations have found that the state has failed to regulate wastewater injection wells, and that fracking waste routinely pollutes underground aquifers that may hold usable drinking water. The EPA is now looking into the matter.

Seneca wants to expand its operations in the Sespe. The company has submitted plans to drill eight new fracking wells and install 8,000 feet of new pipeline, 285 of which would traverse previously undisturbed areas. The Los Padres National Forest and Bureau of Land Management, which also oversees land in the Sespe, are preparing an environmental analysis of the project, which will help determine whether it can go forward.

The U.S. Fish and Wildlife Service, which manages the Condor Recovery Program, maintains that fracking shouldn’t negatively affect the birds as long as mitigation measures laid out by the service are followed. In the Sespe, oil operators are currently banned from drilling within a mile and a half of a nest site. They're also required to install landing deterrents on wells, place new power lines underground when possible, and clean up “microtrash,” like bottle caps or bits of plastic or glass, which often kills condor fledglings.

“They are inquisitive birds, and they are social and want to interact with their environment, but if [the oil companies] follow those rules, condors are not really affected by drilling activities,” says Michael Brady, project leader for the California Condor Recovery program. The DOGGR report, however, proposes additional protective measures, such as monitoring for the presence of condors and preventing litter or microtrash from entering the worksites.

But even these efforts may not be enough.

Nursed back from the brink

Condors, with their tenuous grasp on life and their stature in American history—they are revered by many Native American tribes and once flew in great numbers over Western skies— have inspired heroic measures. About $60 million has been spent trying to save the condor since 1982, says John McCamman, the California condor co- ordinator for the U.S. Fish and Wildlife Service. The federal government provides almost $2 million a year to the program, and about $3 million annually comes from private sources.

Condors were first reintroduced to the wild in 1992, in the Sespe. Since then, small wild populations have also been established in other parts of California, as well as Arizona, Utah and Baja, Mexico.

Biologists zealously monitor the birds—each one has a large, numbered tag affixed to a wing—and when a chick is born, field workers often rappel to the nest and clean it of microtrash. If an egg is not viable, they will try to swap it with one from a zoo.“It’s a year-round job for the field biologists as they’re watching the bird,” Brady says.

Each year, zoo-bred condors are released to keep up the populations, which are not yet at self-sustaining levels. Too many birds die before they can reproduce, or reproduce enough. Often chicks born in the wild do not survive. Nearly a tenth of the wild population died last year.

Lead is still largely to blame, says Myra Finkelstein, an associate adjunct professor of microbiology and environmental toxicology at UC Santa Cruz who is studying condors. Scientists believe spent lead bullets and their fragments are a major source of poisoning for the birds, which primarily eat dead mammals. Of the condors that died last year, three were killed by lead, three died of unknown reasons, two of predation and one of trauma, and 15 are still awaiting autopsies. A new state law prohibiting hunters from using lead ammunition does not go into effect until July 2019.

But habitat destruction and other chemicals in the environment—such as those from fracking—could also be a potential threat to condors, Finkelstein says.

Though no research has been conducted on fracking pollution in the Sespe, a number of recent studies have found elevated levels of carcinogens— arsenic, benzene and toluene—in the air, water and soil surrounding other fracking sites. Don Smith, a UC Santa Cruz professor who studies how chemicals affect humans and animals, including the condor, says “any exposure [to these chemicals] could increase the risk of cancer over a lifetime.” Benzene and toluene can also alter the immune function of humans and animals, he says, and arsenic can be toxic to cells. The effects can be cumulative, Smith explains: “Endangered animals are often exposed to multiple different toxins in combination over time, and these exposures may interact to put them at a greater risk for a negative health effect.” Some chemicals can also “bio-magnify” up the food chain, leaving condors especially vulnerable because they prey on dead animals.

“The condor is a species recently brought back from the brink of extinction,” Smith says. “There is enough evidence to raise concerns.” Finkelstein warns, “The population is not at a place where it can withstand any additional stress.”

Seneca Resources Corporation is confident its fracking won’t threaten the condor. “Protective measures are taken by Seneca to protect the area we do business in, so it has little to no impact whatsoever on those condors,” said Luke Faith, a senior operator for Seneca, during a February public comment meeting on the DOGGR report. He explained that the company follows the Fish and Wildlife Department’s rules, such as the stricture that new wells must be a mile and a half from known condor nest sites.

But these measures aren’t foolproof. Condors do not always return to historic nest sites. Nor do the measures address pollution from fracking. It’s not even known how far water, air and ground pollution extend from each fracked well.

Condors aren’t the only endangered species in the Sespe. The ecologically rich area is also home to Steelhead trout, bighorn sheep and arroyo toad, all of which are on the federal endangered species list and could also be harmed by fracking, according to the DOGGR report.

If oil development continues to threaten the habitat of a species that we, at the same time, have been spending huge amounts of money and time trying to save, what does that say about our priorities as a nation?

Even if mitigation measures can eliminate most of the everyday hazards associated with fracking, expanding oil production in the Sespe increases the chance of an accident, points out Alasdair Coyne, conservation director of the environmental nonprofit Keep Sespe Wild. “The more fracking there is, the more possibility of spills on the ground, and the more potential for condors to come along and ingest something,” he says. Fracking fluids that spill during transport or because of a pipeline break could contaminate surface and groundwater, the DOGGR report states. Crude oil is also harmful to wildlife; it can cling to birds’ feathers, making it difficult for them to fly, and can kill embryos if it contacts eggshells.

Nancy Mauthe—one of the Keep the Sespe Wild activists who sat by a “don’t frack my nest” sign at the DOGGR report hearing—doesn’t want to see the condors devastated again. “You can see them fly overhead now, but they still need help,” she says.

Sightings remain rare. Coyne recalls seeing three condors last July. It was hot, and the hikers were focused on maneuvering down a steep gorge on a mission to remove an invasive shrub. Out of the corner of his eye, he caught the motion of wings. A condor landed “on a ledge, about 1,000 feet above us,” he says. “You’re looking at a creature that has been born in captivity and is now wild again.”

One overcast Saturday in February, I drive out to the sanctuary, hoping to see one of the birds myself. As the skies threaten rain, I survey the gorge. Bits of trash—broken glass, a sandwich bag, bottle caps—litter the side of the road near the entrance. The chaparral is green against the red clay of the mountains. It is quiet, but up on the hill, I see an oil pump churning. I drive on, and soon the silence is punctuated by the eerie whooshing of the pump.

I move to a quieter part of the sanctuary and stay a while, scanning the sky obsessively. I see no condors. I wonder if I ever will.

Hannah Guzik is an investigative journalist who writes about health and the environment. She lives in Ventura, California. Guzik became interested in fracking and its possible health effects after discovering that there are fracking fields not far from where she grew up in Ventura County, adjacent to the Los Padres National Forest and near a protected refuge for California condors. She was surprised to discover the fracking occurring in her community’s backyard, and concerned that the extent of fracking in California was not public knowledge.