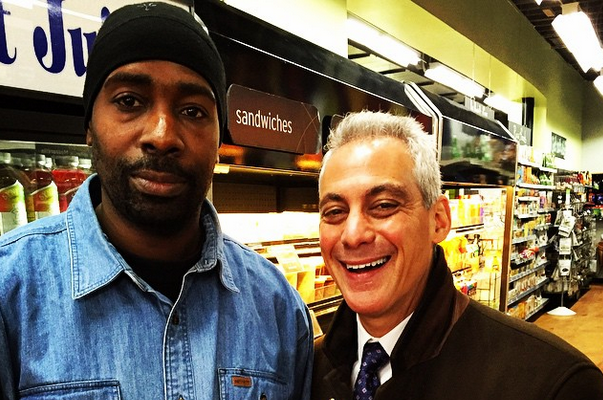 Rahm Emanuel has been dubbed "Mayor 1%." But perhaps he should be called "Mayor 37 Cents."

South Side Man Who Posed Stone-faced with Mayor on Instagram: Rahm Emanuel is a Horrible Tipper

The health food store employee and a coworker say Mayor Emanuel is a notoriously bad tipper, and once left a 37-cent tip on a seven-dollar shake.

A photo of Rahm Emanuel grinning widely while an African-American man stood next to him stone-faced, with the caption “The Mayor of Chicago Rahm Emanuel came by my job, still can't stand this muthafucka tho,” drew significant attention on social media Wednesday.

The man, who was reached by In These Times via phone and asked to be identified only as “GQ,” works at a health food store on Chicago’s South Side. He said that the mayor had come in to the store several times in recent years, and when Emanuel stopped by two months ago, someone in the store suggested that GQ and the mayor pose for a picture. While GQ agreed, he says he wasn’t happy about it. “He was smilin’ and cheesin’ and stuff,” GQ says. “I’m like, dude, come on: you’re only doing that because you’re trying to get elected. You’re trying to make it look like you’re a man of the people. But you’re not.”

GQ, who is in his 40s and lives in the city’s Back of the Yards neighborhood, repeats the charge that has dogged Emanuel throughout his reelection campaign: that he is most concerned with the city’s white, wealthy residents.

“He only caters to people on the North Side, like the Gold Coast,” he says, referring to one of the city's wealthiest and whitest neighborhoods. “The only time I see him on the South Side is when it comes time for elections.” GQ says violence in his neighborhood and in black neighborhoods throughout the city, along with the mayor’s education policies, turned him against Emanuel.

“So many people have been killed. … 50 schools got closed—and most of them on the South Side and West Side”—overwhelmingly black areas of the city. “But you cater to the people in Gold Coast. Why don’t you [cater to] the South Side?”

After the picture was tweeted a number of times throughout the day (including by this author), it was picked up by journalists including Bloomberg Politics's Dave Weigel and MSNBC host (and former In These Times senior editor) Chris Hayes, who called it “the funniest thing I've seen all day.” This characterization, from journalist and In These Times contributor Michael Arria, was typical:

When told that his photo had been tweeted many times, often along with the hashtag #RahmLove—referencing a recent ad campaign (meant in earnest rather than to mock the mayor) started by the hospitality workers union UNITE HERE Local 1—GQ laughs.

The photo is one of several that have circulated on social media of people of color standing near the mayor but looking unhappy to engage him. One photo shows Emanuel extending his hand to an African-American woman at a train stop, where Rahm has done much of his reelection campaigning throughout the city; the woman appears to refuse to shake his hand. Another has been interpreted by some on social media as showing Mayor Emanuel recoiling from a young African-American child, though it is impossible to know exactly what the mayor was reacting to.

GQ says that while he is no fan of the mayor, he doesn’t know a great deal about his challenger, Jesus “Chuy” Garcia, and doesn’t admire him greatly.

“The only politician I’ve got mad respect for is Elizabeth Warren,” he says. “I love her.”

While GQ is opposed to the mayor’s policies, he says he’s also opposed to Emanuel’s etiquette as a customer.

“He’s real cheap,” GQ says. The mayor is holding what appears to be a shake in the Instagram photo. “My friend who made the drink—[Emanuel] only tipped him like a quarter or 50 cents” on a drink he says cost $7. Reached via phone Wednesday night, GQ’s coworker confirmed this report, saying he has served the mayor multiple times and remembers one incident in which the mayor tipped him “37 cents” on the seven-dollar shake (though he said the mayor's security guards have left him sizable tips in the past).