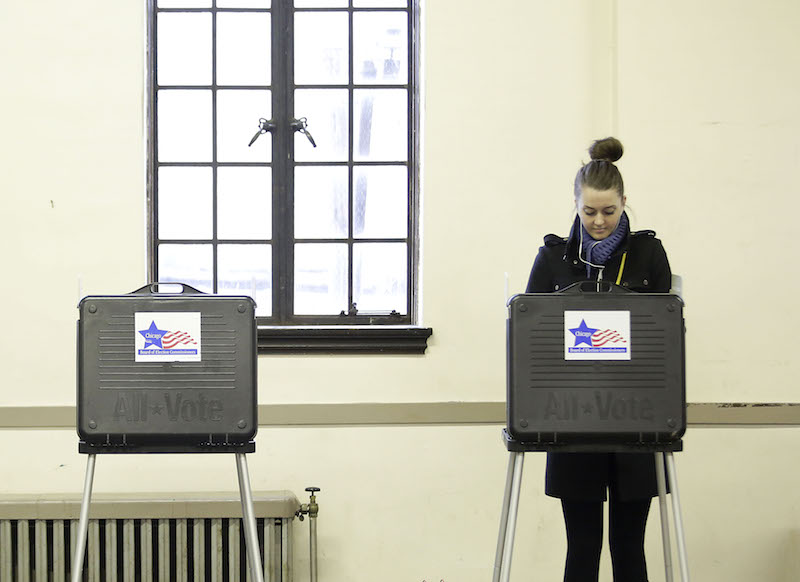 A voter fills out her ballot at a polling station for Chicago's mayor race on April 7. (Photo by Joshua Lott/Getty Images)

Around 10:30 this morning, Sam Dreessen, a 26-year-old unemployed DePaul University graduate (and former In These Times intern) who’s been voting in Chicago since 2006, walked into his polling place at Kozminski Community Academy on 54th and Drexel, a mostly black neighborhood in the city’s 5th Ward. He approached the election judge at the table and, like thousands of Chicagoans on this mayoral election day, received a paper ballot and a felt-tip pen. But, he says, one of the two blanks—the one you fill in to vote for Mayor Rahm Emanuel—was already filled in. Dreessen, a volunteer for Emanuel’s opponent, Jesus “Chuy” Garcia, smelled a rat.

“I just said to one of them, the one who gave me the ballot, ‘This has already been filled out. I want one that’s blank.’ And he acted surprised. He said, ‘I don’t know how that happened.' And he even said there had been other ballots with similar problems.’ He gave me one that was blank, and I told him more than once that they should look at all the ballots, the ones that hadn’t been handed out yet, to see if this happened.”

Dreessen says he was too shocked to even take a picture. “And I thought, ‘I don’t know, this must be happening to other people.’ It just seemed to be so crude.”

He reported it next to the Garcia campaign office in nearby Woodlawn, where they said they had already received similar complaints. Then he took to Facebook, where he posts under the name “Barry Lyndon.” As of 6:08, 52 minutes before the polls close at 7, his post had been shared 538 times. He also texted what happened to a neighbor of his who is a city election commissioner, Marisel Hernandez, who said she was sending investigators “right away.”

I learned all this after tracking “Barry Lyndon” down and speaking to him late this afternoon. I was especially interested to confirm his story because on Facebook some Chicagoans, ever wary, feared the reports were a dirty trick from the Emanuel campaign to discourage people from voting. But no, Sam Dreessen is real and stands by his story. And similar accounts are circulating. The Garcia campaign says it has received several accounts of ballots pre-marked for Emanuel and was able to confirm one. DelMarie Cobb, spokesperson for 5th Ward Alderman Leslie Hairston, told me she personally talked with one voter who ran into the same problem voting at O’Keeffe Elementary School at 69th and Merrill—an even more heavily minority area. And she had heard similar reports from her boss this morning. (Alderman Hairston, meanwhile, a critic of the mayor, warned about the same ballot irregularity on her own Facebook page this afternoon.) Cobb also fielded a report from a person voting on an electronic machine that tried to register a vote for Emanuel every time she punched in a vote for Garcia.

I have’t been yet been able to turn up any reports of irregularities favoring Chuy Garcia.

Reached by the website DNAInfo, a Chicago Board of Elections spokesman did not deny the story, but did try to wave it away: “If someone is suggesting that the judges somewhere are trying to slip one past our voters, I think you're insulting the intelligence of our voters,” Jim Allen said. “If it were a conspiracy, it would probably be the least effective conspiracy in the history of conspiracies.”

This post will be updated if press representatives from the Cook County State's Attorney's Office and Board of Elections are able to return my calls. As for young Sam Dreessen, he’s had a busy day. “People have been contacting me from ABC, NBC, etc. It’s just kind of crazy. And honestly I feel like they should go to the people who’ve picked up other complaints. I’m just one person. Others have been saying the same thing.”