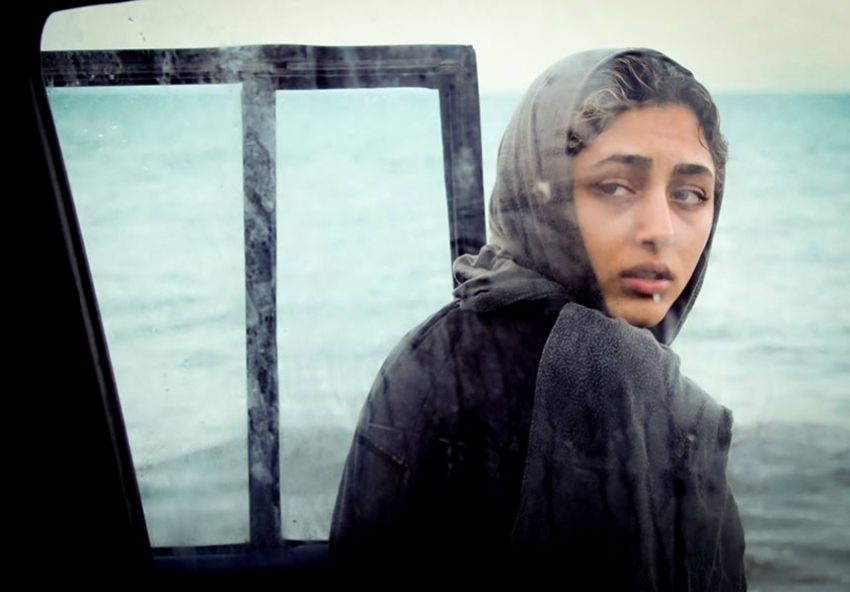 Golshifteh Farahani as Sepideh, whose well-intentioned matchmaking leads to disaster.

Through a seaside mystery, About Elly explores the irrational rules placed on women in Iran.

The search for Elly—did she drown, or did she leave?—is frantic and clotted with unknowables. Who was she, and what happened?

If you’ve been electrified by Asghar Farhadi’s A Separation (2011) and The Past (2013), you’re well aware of the Iranian film­maker’s formidable skill with pure narrative torque. Farhadi’s movies are adult, sharp and directed at the arthouse and festival audience, but not obscure or demanding. His film­making is both sophisticated and crystal-clear. However, it’s his scripts, the inexorable tension of his carefully constructed stories, that do the heavi­est lifting. And the crisis always ends up being about gender.

About Elly (2009), Farhadi’s award-winning precursor to A Separation, is just as masterful an oratorio of so­cietal catastrophe and would’ve cer­tainly found U.S. release sooner if not for rights issues. At first, the scenario couldn’t be simpler: a group of upper­middle-class, grown-up college friends convene on a rented beach spot for a vacation, with families in tow.

Amid the in-joke joshing and high spirits, we immediately glean how the college dynamic has survived. Sepideh (Golshifteh Farahani), the glamour puss among them, is the alpha girl, the organizer and busybody, a reality of which her older husband, Amir (Mani Haghighi), is quite aware, and wary. Ahmad (Shahab Hosseini) is the single man on the premises, having returned from Germany after a painful divorce. At Sepideh’s urging, a fourth woman is present: Elly (Taraneh Alidoosti), single and lovely, and unknown to the others. Sepideh cannot help trying to play matchmaker.

All is well and of no great import, but Farhadi’s electric and urgent style of framing and cutting tells us, sub­liminally, that disaster is pending. When their favorite cottage is taken, they settle for a ramshackle house where, metaphorically enough, the windows always seem to be breaking. Elly remains somewhat distant, making phone calls and insisting she can stay only one night. No one but Sepideh cares very much. Then the lightning strikes: While left alone on the beach

with Elly, one of the children nearly drowns. It’s a scene shot and edited like a heart attack, as the adults slam into panicked overdrive, and the hol­iday becomes a date with mortality. The boy survives, but when everyone turns around, Elly has disappeared.

Cinephiles will immediately re­call Michelangelo Antonioni’s mod­ern landmark L’Avventura (1960), in which the search for a missing wom­an becomes tellingly obscured by the other characters’ preoccupied narcis­sism. But Farhadi’s concerns are more immediate and dramatic: the search for Elly—did she drown, or did she leave?—is frantic and clotted with unknowables. Who was she, and what happened? It’s also, in Iran, a nest of troublesome issues. For one thing, as the group learns from a shattered Sepideh, Elly was tangled in an unhappy engage­ment, leaving them with the awareness that the entire trip had ostensibly com­promised her virtue. One car ride she took alone with Ahmad was enough to destroy her reputation.

What about her fiancé and her fam­ily? Elly had lied about where she was going, Sepideh had lied about Elly, and so almost organically the group begins a cycle of truth distortion, lying to the fiancé and to each other. Social propri­ety hangs over them like a storm cloud, and fissures within the group, and in marriages, open wide.

Narcissism isn’t the social ill at work here; rather, as in A Separation, Farhadi is skewering his society’s set of irrational gender rules by witnessing the torturous knots it puts his characters through. Lies are required, and, to accommodate the distorted reality that results, more lies after that. Implicitly, a woman’s singular purity is more important than whether she’s dead or alive.

The mystery of About Elly, then, lies in cultural self-deception, and what a ruinous mismatch conservative Islamic norms can make with 21st-century pro­gressive civilization. But it’s still about seven people in a beach house, con­fronting how the modern, educated, secular people they thought they were remain trapped in the past, in a society they cannot pretend they’re not part of. Masterfully performed across the board and filthy with details (amid the angst over Elly, you glimpse the nearly drowned boy snuggled up against a space heater, ignored), the film is both riveting and resonant in overwhelming measures, and will remain one of the best released this year.