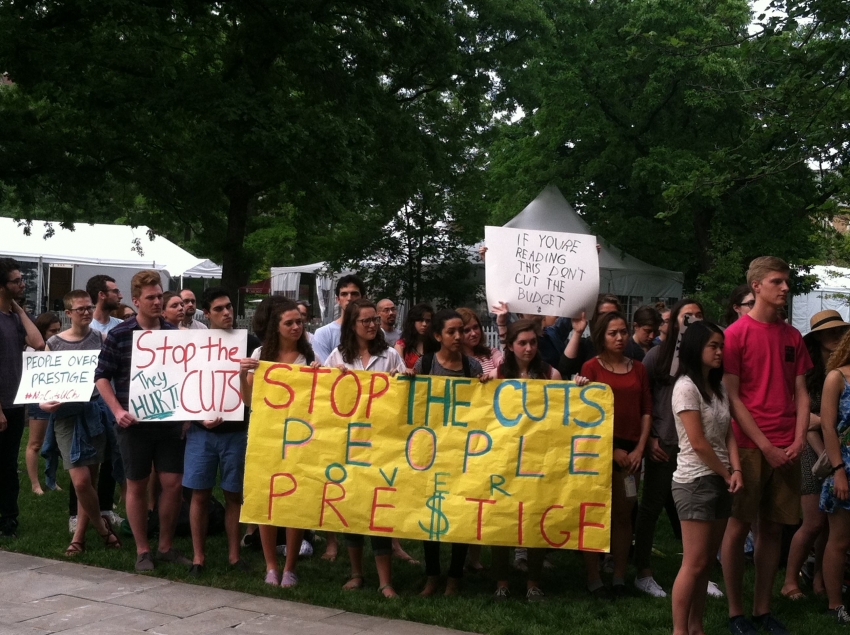 The students, some dressed in their graduation gowns, say their school’s austerity measures are part of a broader pattern of corporatization in higher education.

The university’s drive to build its prestige is coming on the backs of the most vulnerable members of the community.

“UChicago says they’re broke, we know that’s a goddamn joke!” chanted about 60 students and alumni as they gathered outside the University of Chicago Admissions Office Thursday afternoon. The university faced its second sit-in in two days with a dozen imminently graduating seniors gathering to protest the University of Chicago’s proposed budget cuts of 5-6% to all non-academic staff and student positions, with academic departments taking at 2% hit.

The protestors, who arrived ready in their graduation caps and gowns, say that they are responding to budget cuts totaling near $30 million. They say the cuts will mean the firing of low-wage and mid-level campus workers, layoffs and freezes to student employment, and tuition and fee increases in all departments and divisions. These cuts come at a time when the university has poured $1.5 billion into campus remodeling in recent years and is in the middle of a $4.5 billion capital campaign.

Students are concerned about immediate threats to student services and staff, but deeper frustrations were evident in the crowd’s call to the university, insisting “Your job is education, don’t act like a corporation.” Students are angry about the larger evolution of higher education towards a corporate profit-seeking model—a process of which the University of Chicago has been at the forefront.

Budget cuts at the U of C are implemented through a reduction in the amount of funding that each university division receives as a total operating budget from the central administration each year. Each division is then left to decide how to absorb the cuts, which could mean the loss of jobs or spikes in tuition.

Students are demanding a guarantee that there will be no loss of student or low-wage jobs or tuition hikes as a result of budget cuts, as well as greater transparency and open discourse with students regarding the university’s budget plans. Protesters are also demanding action on issues of sexual assault and Title IX enforcement, racial profiling of minority students and community members by university police, as well as the demands of the Trauma Center Coalition activists who were arrested on Wednesday.

Why is an institution with a $7.55 billion endowment and in the process of raising $4.5 billion more cutting its budget? The answer starts with debt. As recently reported by Crain’s Chicago Business, Moody's Investors Service downgraded $3 billion of U of C debt last year. In January, Moody’s again stated concerns about “thin” cash flow and rising debt service, stating that university debt is on track to grow by $450 million through fiscal 2018. These debt costs are associated with ambitious building programs—which, as Crain’s has also noted in the past, are part of the U of C’s consistent effort to attain and maintain a status on par with the Ivy League.

Some students feel that the university’s drive to build its prestige is coming on the backs of the most vulnerable members of the community, including students dependent on financial aid who will find it harder to find jobs during the academic year. Student Body President Tyler Kissinger told the chanting crowd that the university “hasn't invested where it's needed.” He added that “if the university needs to cut its budget, they’ve got plenty of money to spare at the top,” referring to highly compensated upper-level administrators. U of C President Robert J. Zimmer is the highest paid university president in the nation, with his 2012 compensation totaling $3.4 million. The Office of Admissions, which bears a great deal of the responsibility and the benefits of the university’s meteoric rise in college rankings, will see no cuts, which protesters see as part of the university’s continued privileging of prestige over the welfare of its student, staff and community.

The University of Chicago, like the vast majority of universities, is a nonprofit. That designation entails tax-exempt status, with the understanding that the exempt institution benefits the community. Therefore, the school’s revenue can be seen in part as belonging to the community—a community that has forgone the benefits of the resources like potential tax dollars that could fund public services which are lost to the school’s tax-exempt status.

It should follow that university budget decisions are made openly and with extensive input from students, staff, faculty, and members of the community. Instead, the decision was made largely outside the view of the university community.

Virginia Parks, who recently stepped down as Spokesperson of the Council of the Faculty Senate at the U of C, says that “faculty provided no input” on the decision to cut the school’s operating budget. “The decision to make cuts was made by central administration alone.”

It is difficult to see how these cuts were made with the university’s academic mission in mind, let alone community interests, if faculty and students were given no avenue for input. University spokesperson Jeremy Manier did not comment on who or what would be affected by the cuts. Kissinger, the student body president, said that while he was told that cuts to top administrative salaries were “not off the table,” he seriously doubted that any such move would be considered.

The situation that is now sparking protests at the University of Chicago is rooted in the fact that decisions about funding allocation, which is supposed to be partially dedicated to creating some public good, are made among a very narrow group of people—an arrangement becoming increasingly common throughout American higher education.

The students protesting on Thursday provided a reminder to question narratives around austerity. What does it mean for such a wealthy institution to say that it cannot afford to hire as many student workers, generally compensated between $8.25 and $14 per hour? These administrators claim hard financial times for the university while compensating themselves at exorbitant rates and allocating institutional funds to image-boosting projects that do not align with the actual interests of the university community.

The protesting students left the Admissions Building with what they consider to be some significant gains, including commitments to meet with high-level administrators to discuss their grievances.

A statement from the organizers of the protest asserts, “If we let them have the austerity narrative, that will be their answer whenever we ask for anything—better student counseling services, actual training and more staff for handling sexual assault and supporting survivors, divestment from fossil fuels, a trauma center at the UCMC—‘We just can't afford it,’ that in this hard time we can't be asking for these kinds of ‘privileges.’ This is exactly what's going on in Illinois [with Governor Rauner’s budget cuts,] and what's going on in our country as a whole.”

The author is a member of University of Chicago's Students Organizing United with Labor, which participated in the actions.