Early Tuesday, National Nurses United (NNU) announced that its 1,500 members at the University of Chicago Medical Center (UCMC) would not go on strike as planned. The union called for a one-day strike set for April 30, following nearly eight months of negotiations and a strike authorization vote on January 29, when 95% of membership voted in favor of authorizing a strike; now, the union is claiming victory in its negotiations with the medical center.

Jan Rodolfo, lead negotiator and Midwest Director of NNU has stated that she ​“feels wonderful about the outcome, as do nurses. … We accomplished many of our objectives” in negotiations.

The hospital had stated that the key issue at stake in negotiations was the union’s demand for more money on top of the yearly raises offered by the hospital. The union, however, insisted that they were fighting against a dramatic increase in healthcare premiums for nurses and focusing on staffing and scheduling issues that directly impact the quality of patient care.

As part of these staffing-related demands, the union also asked to set a fixed maximum number of patients that can be assigned to each nurse and increase the number of additional patient care support nurses. Nurses around the country have been raising concerns about what they often claim are inadequate staffing hospitals for decades. California is the only state with legally mandated nurse-to-patient ratios, which came into law in 2004; some studies have shown that lower patient-to-nurse ratios are linked to fewer patient deaths and improved quality of health. In cases where nurses’ workloads are in line with California-mandated ratios, nurses’ burnout and job dissatisfaction are lower, and nurses report consistently better quality of care. 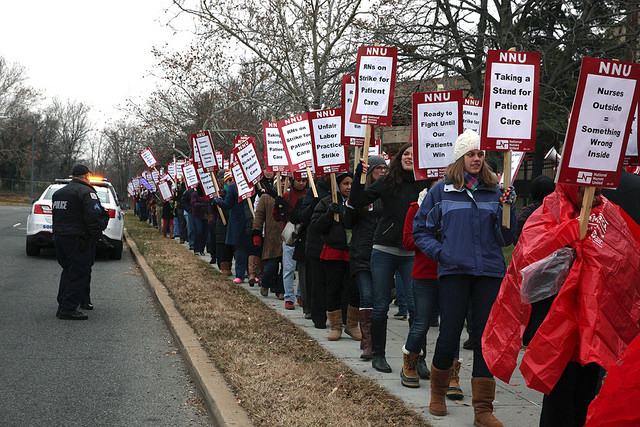 Rodolfo further indicated that use of rotating shifts, a key issue for the nurses in bargaining, will end, representing ​“a major improvement in patient safety.” Rodolfo explained that prior to these developments, about 40 percent of UCMC nurses could be required to work both day and night shifts within a given six-week period, and could even be required to do so within the same week. This practice, she says, ​“results in people getting very behind on sleep and making medication errors. Nurses are less likely to catch subtle changes in patients’ condition before it’s too late.” The hospital, Rodolfo claims, was proposing to increase the use of rotating shifts. The UCMC declined to comment on these developments.

Also at stake in negotiations was a hospital proposal that charge nurses, nurses with administrative responsibilities within their unit on top of patient care assignments, be converted to full-time supervisors. The union says that this change would eliminate a position in the bargaining unit; this position was kept within the union.

The hospital made a point of noting in an online bargaining update that NNU has called more strikes than any other nursing union in the United States.

The NNU strike announcement and subsequent withdrawal come two weeks after the union accused the hospital of bargaining in bad faith. Cindy Loudin, an organizer for NNU, reports an especially hostile environment towards union activity in the UCMC. She says that while it is common for union staff to be kept out of designated ​“patient care areas,” she was also denied access to nurse break rooms within hospital units, restricting her ability to communicate with union members. The hospital declined to comment on these allegations.

Even so, Rodolfo insists, ​“We remained willing to negotiate anytime the employer was ready.” In the end, she says, ​“two long days of bargaining finally paid off.”

See the options
Miriam Shestack is a Spring 2015 In These Times editorial intern. She is a senior at the University of Chicago majoring in history and a member of Students Organizing United with Labor, an affiliate of United Students Against Sweatshops.
Have thoughts or reactions to this or any other piece that you'd like to share? Send us a note with the Letter to the Editor form.
More articles by Miriam Shestack
Labor
We Need Domestic and International Regulations to Prevent Corporations from Fleeing Overseas
Viewpoint
Students Protest University of Chicago Budget Cuts, Say Admin Is “Acting Like a Corporation”
The students, some dressed in their graduation gowns, say their school's austerity measures are part of a broader pattern of corporatization in higher education.
Labor
On 2-Year Anniversary of Rana Plaza Factory Collapse, Activists Announce Major Victory for Victims
Similar articles
Labor
The Original Coal Country
Kari Lydersen
Labor
Australia Seeks to ‘Manage’ the Poor While Making Them Poorer
Michelle Chen
Labor
RNC Workers Paid Below Minimum Wage; Fair Trade Fallout; Breaking Bad vs. The Wire
Mike Elk
Join our newsletter
Fearless journalism, emailed straight to you.
Subscribe and Save 66%