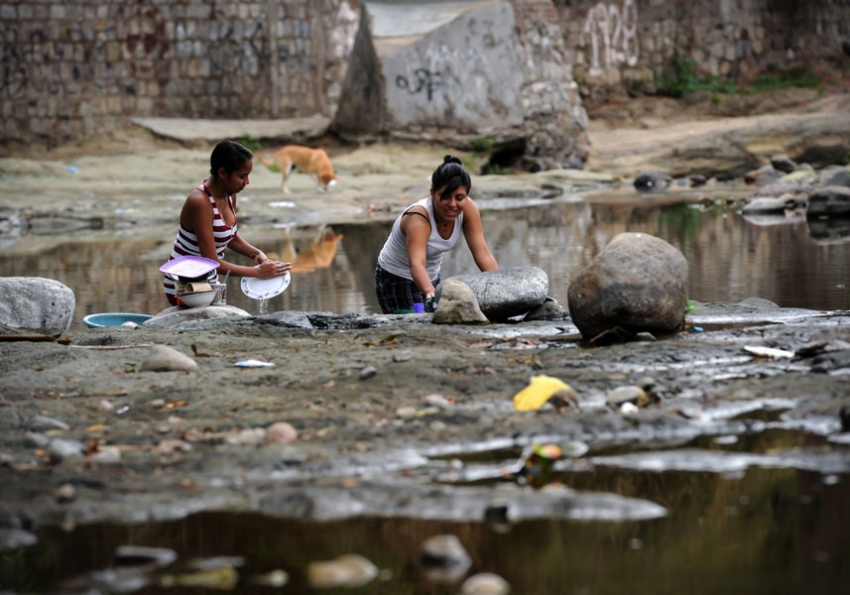 Women wash the dishes in the droughtstricken Guacerique river outside Tegucigalpa, Honduras, on June 2. The drought has decimated crops and cattle, sending migrants north.

How the Border Security Industry Will Profit Hugely From Climate Change

A hawk’s eye-view of global warming.

The Department of Homeland Security’s Climate Action Plan acknowledges that it may be necessary to prepare U.S. borders for 'frequent, short-term, disaster-driven migration.'

April 24, at the Defense, National Security, and Climate Change Symposium in Washington, D.C., Brigadier General Stephen Cheney stepped up to the podium to discuss “conflict and climate change.” Although Cheney is CEO of the American Security Project think tank, he identifies first as a retired Marine who likes to talk about “war fighting.” That’s fitting for a gathering that revolved around the “war on climate change”—a phrase used by journalist Cyril Mychalejko to describe the tendency to fit the world’s coming climatological upheavals into a “national security framework.”

Denialism still holds some sway in Congress, with seven GOP senators expressing outrage in May that FEMA asked states to plan for climate change, but among the military and defense technology elites gathered at the symposium, no time was wasted on debating the science. Instead, the Obama administration’s warning in February that the warming of the planet is “an urgent and growing threat to our national security” set the agenda.

Much of the talk revolved around beefing up military infrastructure at home and abroad to be resistant to harsher climates. The army has embarked on a “Net Zero” initiative to make its U.S. bases water-and energy-independent through green technology, and it is conducting a review to assess the vulnerability of its 7,000-some overseas bases to climate change.

However, it didn’t take long for Cheney, like many speakers at the twoday event, to zero in on migration. “We know for a fact that [climate change] is already driving internal and cross-border migration,” Cheney said to his audience of government officials—heavy on the Department of Defense—and industry reps from military contractors such as Lockheed Martin and Booz Allen Hamilton.

That’s true: Scientists estimate that in Bangladesh, the “ground zero” of global warming, rising sea levels could displace 15 million people by 2050.Oxford University’s Norman Myers has projected that there could be as many as 200 million “climate refugees” by mid-century, though other researchers have argued that this number is inflated.

It’s not just that climate change displaces people through floods, storms and rising sea levels; it also displaces them through scarcity of food and water, and by the conflicts that are in turn sparked by scarcity and migration. Sociologist Christian Parenti calls this “collision” of political, economic and ecological disasters the “catastrophic convergence.”

Cheney’s symposium presentation could have been billed as a PowerPoint tour of the world’s catastrophic convergences. The desertification in the borderlands between Chad and Nigeria “has caused a lot of migration,” Cheney said, and the terror organization Boko Haram “is simply taking advantage of that.”

“One of the important drivers of strife,” he noted, is “high prices and drought.” A drought of “unparalleled length and severity” in Syria in the mid- 2000s, he explained, led to the mass internal migration of 1.5 million people from rural to urban areas, such as Damascus, “where they had no jobs, no food—that’s what started and fomented the civil war.” Now, Syrian refugees are flooding into Europe.

Currently, international law does not grant refugee status to those driven from their homes by disasters or climate change. Jane McAdam, an expert on refugee law at the University of New South Wales in Sydney told Bloomberg News in March that there is “little political will among governments to create new categories of people requiring protection.” She noted that a 2011 effort by the UN refugee agency to craft a global framework for handling climate change and disaster-driven displacement went nowhere. However, some see a hopeful legal precedent in a 2014 case in which New Zealand granted residency to a refugee family from the island nation of Tuvalu, which is being swallowed by rising seas.

Many at the Defense, National Security & Climate Change Symposium showed sympathy for those whose massive displacement seems inevitable. However, for the most part, this climate refugee upsurge was presented as one national security menace, among many, to be managed.

The Department of Homeland Security’s Climate Action Plan, in effect since 2013, acknowledges that it may be necessary to prepare U.S. borders for “frequent, short-term, disaster-driven migration.” The plan anticipates increased population movements, “both legal and illegal, across the U.S. border,” because of “severe droughts and tropical storms,” particularly in Mexico, Central America and the Caribbean. The ongoing drought in Honduras, Guatemala and El Salvador, for example, caused massive crop failures this year, likely adding to the influx of migrants already heading for the United States to escape extreme violence and poverty.

In the post-9/11 era, the Mexican border has been a place where three key U.S. foreign policy initiatives have converged: the war on drugs, the war on terror and the war on immigrants. To those a fourth can be added: the war on climate refugees.

Is that a camera in your cactus?

For companies like Northrop Grumman and General Dynamics Mission Systems attending the ninth annual Border Security Expo in Phoenix in April, that war on climate refugees spells a profitable business opportunity. The expo offered a dizzying look at our sprawling border-security industry.

More than 100 vendors filled a crowded exhibition hall in Phoenix with gadgets and displays that look like science fiction. Technologies range from miniature drones to motion sensors to mounted machine guns to spherical robots (originally designed by NASA to explore the planet Mars). This is where Homeland Security high brass meets private industry, and where a developing government-industry nexus envisions the future of the U.S. borderlands.

What looks like a pile of rocks on one table is actually a surveillance camera. And rocks are just a small sample of what the engineering company Gans & Pugh Associates can create from fiberglass to disguise surveillance equipment.

“[A] log, all kinds of things. You name it. We basically need a sample or a picture … and you tell us what you want to put in it,” said the company’s vendor. He declined to name a specific price, saying it ranges depending on the order size.

TimberSpy’s specialty is the surveillance-camera tree stump, perfect for patrolling the deforested “Montana border” against encroaching Canadians. At the Expo, TimberSpy employee Kurt Ludwigsen told Fox10 local news that two of their tree stump models are large enough for agents to hide inside.

Eyesight Surveillance has manufactured wireless cameras and motion sensors that can be concealed in, for example, one of Arizona’s majestic saguaro cacti. “We just had some Border Patrol guys through here looking at this stuff say, ‘Why don’t we have this?’ ” said Eyesight’s vendor.

No panels focused on climate change, but there were many references to increases in migration. Former Customs and Border Protection (CBP) Commissioner David Aguilar told an audience of industry representatives during a panel, “Don’t forget to look at what’s happening tomorrow,” citing the possibility of “imminent” and “dramatic” cross-border traffic.

Later, in the keynote speech, Mark Borkowski, CBP’s assistant commissioner and chief acquisition executive, told the audience of industry reps that the agency is “interested in [their] ideas on how to innovate.”

Those innovations will add to what is already the most massive border enforcement apparatus in U.S. history. Never before have there been so many hundreds of miles of walls and barriers and concentrated surveillance technologies on the U.S.-Mexico border. Never before have so many U.S. Border Patrol agents policed that border: Their ranks have swelled from 3,500 in the early 1990s to more than 18,000 today. During the past decade, the combined annual U.S. budgets for Immigration and Customs Enforcement and CBP have increased from $9.5 billion ($11.5 billion in today’s dollars) in 2005 to more than $18 billion in 2015. The fiscal year 2015 budget request includes an increase of $90 million to upgrade remote and video surveillance programs. All of this spells a windfall for companies like Lockheed Martin and Boeing, which have received tens of millions of dollars in border-security contracts.

With denialism still ruling the day in Congress, the words “climate change” don’t appear anywhere in the FY2015 budget request for CBP or ICE, but it appears that at least some parts of the federal government are taking measures to prepare for our rapidly changing weather patterns. Unfortunately, those preparations are most likely to benefit the likes of Boeing—not the millions worldwide who are most vulnerable.

Todd Miller is the author of Border Patrol Nation: Dispatches from the Front Lines of Homeland Security (Open Media). He has written on border and immigration issues for the New York Times, Al Jazeera America, and NACLA Report on the Americas and its blog Border Wars, among other places. You can follow him on Twitter @memomiller and view more of his work at toddwmiller.wordpress.com.

Alex Devoid reports on border and immigration issues as a freelance multimedia and print journalist. He has written for NACLA Report on the Americas and has worked for BorderLinks in Tucson, Arizona, and Acción Médica Cristiana in Managua, Nicaragua. You can follow Alex on Twitter at @devoidalex.