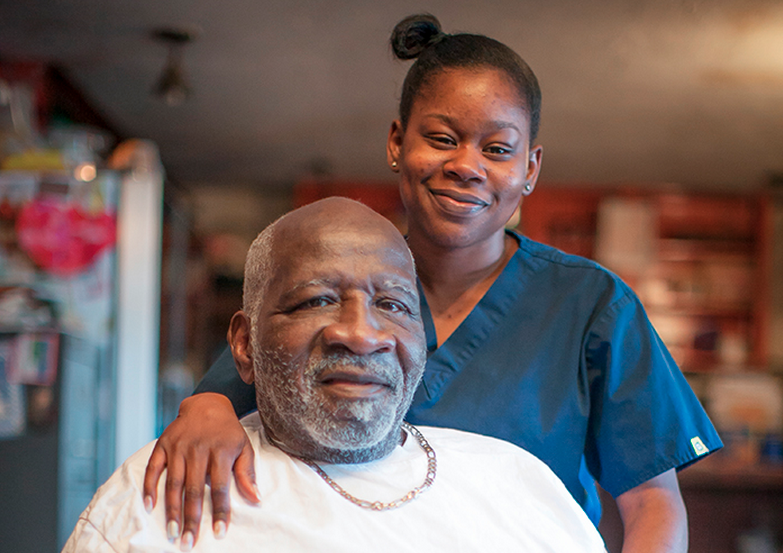 Can workers centers and unions create a movement strong enough to fight back?

The home health aide in scrubs pushing a client's wheelchair up the ramp from street to sidewalk may appear to have little in common with a cashier at McDonalds or Pizza Hut. But chances are, the company that employs the home care attendant is part of the same type of national franchise structure that the burger giant and other fast food companies use. And just as it has for fast food corporations, the industry’s lobbying outfit, the International Franchise Association (IFA), is suing on behalf of home health corporations to keep workers’ pay low.

The IFA has already emerged as one of the primary opponents of the Fight for 15, the SEIU-backed movement that advocates for a $15-an-hour minimum wage and the unionization of fast food workers. Wherever employers lash back against the Fight for 15, the IFA is there: helping McDonald’s argue to the National Labor Relations Board that it is not responsible for franchisees’ wage theft and workplace abuses; trying to block a new rule at the NLRB that would speed up the union election process; suing to suppress Seattle's recent minimum wage increase to $15 per hour.

“The [Seattle] ordinance is clearly discriminatory and would harm hard-working small business owners who happen to be franchisees,” railed IFA President and CEO Steve Caldeira after the groups’ argument failed the first round in court. “Those who have set out to destroy the long-accepted, time-tested and proven franchise business model must be stopped.”

And now, the IFA is suing the federal government in an attempt to keep home health aides from earning the minimum wage and overtime pay.

Instead of selling burgers or pizza, for-profit home care staffing agencies such as BrightStar sell the care, companionship and feeding services that seniors and people with disabilities once typically received in a nursing home. Many people, such as Rosa Hendricks, who was profiled in a 2011 National Public Radio series that examined the benefits of home care versus nursing homes, prefer to live at home. Hendricks put it this way: “It makes you feel so much better and know that you are somebody.”

“[Home-based care] is preferable to nursing home care for many reasons. But we have gotten it on the cheap,” says Eileen Boris, a women’s studies professor at the University of California/Santa Barbara. Taking advantage of a Jim Crow-era loophole in federal labor law known as the “companionship exemption,” companies like BrightStar can legally pay the nearly 2 million home care workers in the United States at less than the minimum wage (as little as the market allows), and have the option to not pay overtime.

Like agricultural workers, another then-mostly African-American sector, home care workers were carved out of the 1938 Fair Labor Standards Act (FLSA) (which set wage and hour protections for nearly all other workers) and again when Congress amended the FLSA in 1974. Home care workers can be paid less than the $7.25 per hour federal minimum wage and aren't entitled to overtime pay in roughly half of the 50 states.

Such low wages have a profound impact on home care workers. “I’m not able to save anything,” says 53-year old Marilyn Blackett, who has been a homecare worker in Brooklyn, New York for the past 14 years. “I try not to ask family members [for money]. You don’t let people know what’s happening to you.”

Since the mid-20th century, Boris says, “the structure of the [home-care] industry was built in part on this exemption.” According to an August 2014 study in Health Affairs, the majority—62 percent—of the home care industry consists of for-profit franchises. It’s a lucrative model: the industry rakes in $84 billion a year, with median revenue for a single franchise at around $2 million, according to one industry study.

The relatively low start-up cost of home health care franchises (around $150,000 or less, compared with around a half million dollars to start a fast food franchise), combined with the cheap labor, has triggered a home-care boom.

Franchisors such as BrightStar, run by CEO Shelly Sun (who also serves as IFA treasurer), are taking advantage of this burgeoning demand. Sun and her husband and business partner, as Sarah Jaffe wrote recently in Dame magazine, have boasted that they “had no medical, home-care, or health-care experience when they started their business, and that would-be franchisees need none either.” Franchisors and franchisees leave such health care expertise to the actual home care attendant—the person who lifts the client, helps her eat, mops up her messes, reminds her to take her medication, reads to her, takes her to the grocery store.

What’s more, federal dollars are flowing to these for-profit staffing agencies. In most states, the person receiving care can pay for it out of his or her Social Security check—or have it paid for by Medicare or Medicaid. “It was the availability of hiring people using federal monies … that allowed the franchise industry to blossom,” says Boris.

In other words, for-profit home care employers are taking federal dollars and using them to hire workers at subminimum wages—with virtually no public accountability.

David Weil, head of the U.S. Department of Labor’s Wage and Hour Division, recognizes that action is needed to reverse this race to the bottom. In September 2013, his agency issued a final rule to close the companionship loophole. The home care industry promptly sued Weil, with the IFA as one of the lead plaintiffs. The case, Home Care Association of America v. Weil, is now in federal court; the DC Circuit Court of Appeals has expedited the case and could issue a decision at any moment. In the meantime, the exemption remains in place.

With the U.S. senior population projected to reach 88.5 million, or 20 percent of the total population, by 2050, the demand for home care services is on the rise. The job of home health aide is now the third fastest growing occupation in the United States, according to Forbes. If the IFA and home health companies are able to persuade the courts to keep the companionship exemption, CEOs like Sun will see their profits grow while workers remain in poverty.

With home care workers and fast food workers facing a common enemy, the question arises: Can they join and create a single movement for workplace justice in the franchised economy?

Two separate, non-traditional worker organizing campaigns are underway in the fast food and home care industries. But the franchised structure of these industries presents unique challenges for workers who may wish to actually form labor unions: it isn’t always clear whether the franchisor (the brand) or the franchisee (the storefront owner/operator) is responsible for setting wages and workplace conditions.

What’s more, home care workers are in some states explicitly prohibited from forming labor unions—and where they can form unions, the Supreme Court last summer ruled in Harris v. Quinn that the workers cannot be required to join or pay the fees that would keep the union running. Because of these and other challenges, the two campaigns—SEIU's Fight for 15 for the fast food workers and the coalition-based Caring Across Generations for the home care workers—focus more on advocating for worker-friendly policies and regulations than on unionizing these growing workforces.

That said, SEIU is forging ahead with organizing fast food workers through Fight for 15, using short-term strikes to protest and raise awareness about the need for a living wage and the right to unionize. Domestic workers, with their solitary shuttling between clients' homes, have historically been a tough group to bring together. But the National Domestic Workers’ Alliance (NDWA) and the SEIU have been organizing them in recent years, with some success. NDWA is an alliance of over 40 local domestic worker groups that organize domestic workers for expanded rights and dignity on the job, and push for laws to improve rights for domestic workers at the local, state and federal levels. Both groups say their campaigns aim to raise wages and benefits for the entire industry.

NDWA and its partners have won legislative victories on a Domestic Workers' Bill of Rights in New York, California, Oregon, Hawaii and elsewhere by building common cause with home care clients. With its Caring Across Generations campaign, NDWA has formed regional and state-based coalitions with the families of the elderly people and people with disabilities that home care workers serve.

NDWA founder and director Ai-Jen Poo says that Caring Across Generations is building a counterforce to the franchised home care industry's unscrupulous pursuit of profit over quality care.

“In it​s own complaint, the IFA said that their mission is to ‘protect, enhance and promote franchising.’ You have to ask, should a trade association like this be determining the future of homecare for millions of workers and consumers?”

As an alternative to the franchise system, workers’ organizing efforts are starting to include developing more worker-friendly models of employment, such as worker-owned cooperatives. Jaffe writes that in New York, “worker-owned Cooperative Home Care Associates has more than 2,000 worker-owners who make $16 an hour (more than twice the federal minimum wage) plus benefits and have a guarantee of working hours.”

Home care workers are already organizing through Caring Across Generations, and SEIU’s participation provides a national infrastructure that could allow Fight for 15 and home care workers to join forces to challenge the IFA. SEIU's own home care and fast food campaigns began in April to link up with a series of teach-ins and protests in SEIU Healthcare's Midwest region, and such solidarity actions could extend to other regions in the future.

But these are only beginnings. As Maria de Fatima Moscani, a Mineola, New York home care worker with 14 years on the job, says: “Something has to be done about low pay, and the money is there. This is not acceptable at a human level. The cost of living is skyrocketing, food is up, and rent is so much. How can we live?” With a juggernaut of major franchised brands moving against home care workers' rights, another question surfaces: Can fast food and home care workers create a movement powerful enough to fight back against the corporate forces up against them both?

Kelsey Howe and Jacey Rubinstein contributed research to this article. A condensed version of this article appeared in the August 2015 issue of In These Times under the title “Treating Old People Like Hamburgers.”

Mariya Strauss is an economic justice researcher with Political Research Associates. A Maryland-based freelance writer, her investigative journalism and commentary have been published in The Nation, at the GlobalComment blog, The Public Eye magazine and elsewhere. You can follow her on Twitter at @mariyastrauss. You can read her other stories for In These Times here.