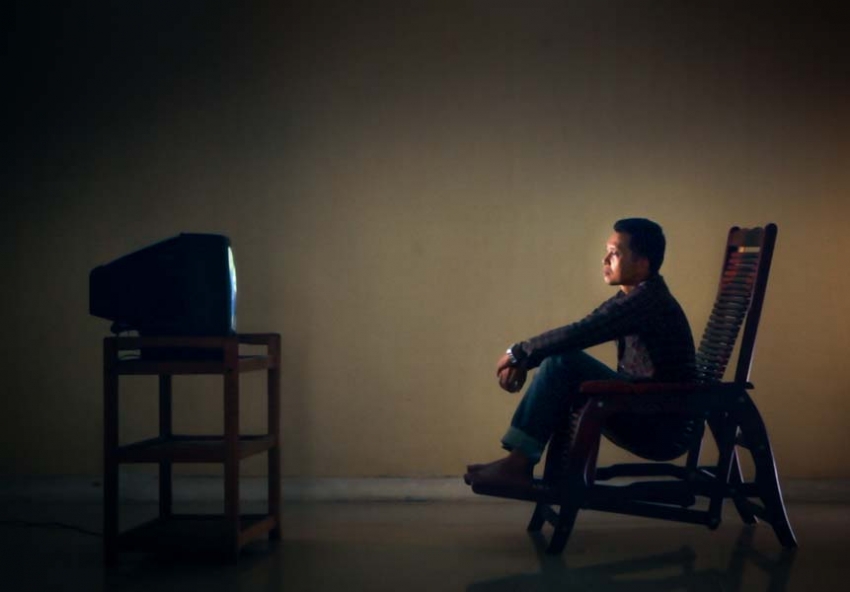 Adi, whose brother was killed during the 1965-66 Indonesian genocide, watches interviews with its perpetrators.

A Quiet Return to the Killing Fields of Indonesia

Joshua Oppenheimer’s The Act of Killing focused on the perpetrators of genocide; in the sequel, the stage is shared by traumatized survivors.

As with The Act of Killing, the credits of Oppenheimer’s new film are made up mostly of Anonymous—scores of crew members for whom participation in the project could be a death sentence. The scroll is a chilling statement, an expression of a maddened country hiding from itself in plain sight.

Joshua Oppenheimer’s 2012 documentary, The Act of Killing, pulled open the global curtain on Indonesia’s culture of genocide celebration, a madness that lingers decades after the 1965 anti-Communist massacre that killed roughly a million citizens in about six months. Now Oppenheimer is back with a companion film, The Look of Silence, which suggests that he could make a dozen more films and never exhaust the weirdness of this country’s peculiar schizophrenia. “Don’t make trouble, Joshua,” someone tells him late in the movie, but the strangest part is how everyone else manages to keep mum about the killing culture even as the aging murderers flaunt their acts and are celebrated on national TV.

They reenact the crimes for Oppenheimer’s cameras, in picayune detail. Early in the new film, we see footage shot in 2003 of two aging militia buddies visiting the site of their favorite bloodbath. They describe for the camera how they eviscerated, beheaded and otherwise dismembered scores of “Communists” (essentially anyone not delighted with the then-recent military coup). They hacked this way or that, the blood shot this way or that, penises and breasts were cut off. And then the old men chuckle, as do all the steadfastly reserved Indonesians interviewed in the film—cutthroats and victims alike—during any moment of awkwardness in front of the camera.

The Act of Killing focused on the murderers; now, the stage is shared by traumatized survivors. Oppenheimer begins by showing this initial footage to Adi, a gentle, 44-year-old optician who makes house calls and fits the elderly with glasses. Adi was born after the purge, but his brother Ramli was butchered in full view of his community by two old duffers (one of whom has since died). Oppenheimer began investigating the mass killings in Indonesia in 2003, but was at first unable to film still-terrified survivors. In the period after the production of his first film but before its release, he began working with Adi, talking secretly with survivors and amassing interviews for The Look of Silence. (The release of The Act of Killing made it impossible for Oppenheimer to ever go back to Indonesia.)

The new film follows Adi’s confrontations with various death squad alumni, trying to get someone to admit responsibility for the killings. To the guilty parties, Oppenheimer was always a Westerner providing these withered psychopaths with yet another ray of limelight. But here, in footage shot in 2012, Adi’s presence, quietly pressing for answers regarding a notoriously unmysterious killing to which he was personally attached, is, for the interviewees, an unsettling matter. As Adi proceeds from one massacre vet to another, often checking their vision first as a pretext, we watch the entire culture’s web of deception melt and congeal on the faces of the killers and their families.

The details remain appalling. Multiple militia “heroes” admit to routinely drinking the fresh blood of their victims to ward off the prospect of “going crazy,” as some did after simply “killing too many people.” (“Salty and sweet” is how one of them describes the flavor, without being asked.) Adi sits down with the widow and grown sons of the man responsible for Ramli’s death, and Oppenheimer shows them footage he took of the man displaying a coffee-table book he had published—and illustrated himself— that detailed whom he killed and how. “We didn’t know,” they say in response, “we never saw the book,” seemingly shocked by facing the truth they had to have known all along.

Oppenheimer’s use of Adi’s quiet, soulful gaze speaks volumes; no narration is necessary. In The Act of Killing, Oppenheimer ceded aesthetic control to the Hollywood-dazzled killer celebrities; The Look of Silence is its straight injustice-doc brother. It’s graceful and eloquent, and it has as its subject a lierotten culture—not merely in the official cant, but in the hearts and minds of even the poorest people. The citizenry can’t talk about the killings, the still-powerful and eminent perpetrators can’t stop talking about them, and the cognitive dissonance created is gasp-worthy.

As with The Act of Killing, the credits of Oppenheimer’s new film are made up mostly of Anonymous—scores of crew members for whom participation in the project could be a death sentence. The scroll is a chilling statement, an expression of a maddened country hiding from itself in plain sight.