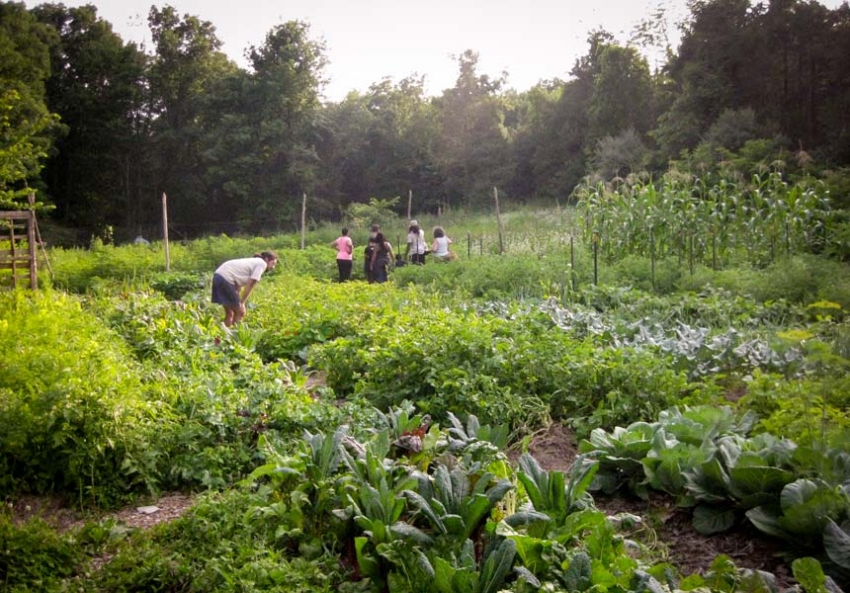 Members of the Long Spoon Collective utilize a community garden for food and often hold "crop swaps" in order to exchange food, free of charge.

Kropotkin on the Hudson

A collective in Saugerties, New York, is trying to live by the teachings of 19th century Russian anarchist Pyotr Kropotkin.

‘The four of us happen all to wear size 10 shoes. So if we go to each other’s places and one of our shoes gets messed up we just step into another’s.’

On a spring day, Chase and Frank, men in their late 20s, sit between a vegetable garden and the trailer where Chase grew up in the Hudson River town of Saugerties, New York. They are discussing their vision of creating a self-supporting community that uses minimal fossil fuels and little money. Frank says proudly that they already “have young people who are really willing to walk their talk, have a huge vision and have the boots on the ground to carry it out in incremental ways.”

Two years ago, Chase and Frank joined with other local residents—millenials and boomers alike—to form the Long Spoon Collective, a loosely connected network that is conducting an audacious experiment. Their goal: buck the dominant competitive and individualistic culture by spreading the area’s natural wealth and goodwill.

We are not sure what the future holds: apocalyptic collapse, a slow decline as fossil fuels dwindle or business as usual with a small number of people using up an ever larger portion of the world’s resources at the expense of the rest of the planet. Whichever scenario unfolds, we are working towards resilience and the paradigm shift we believe is urgently needed.

Chase and Frank, along with two other young men, are at the core of the Long Spoon Collective. They feed themselves on what they grow and share a bank account, surviving on an annual budget of $15,000, which they don’t come close to spending.

This may sound similar to the off-the-grid, back-to-the-land intentional living experiments in the 1960s and 1970s, but the Long Spoon Collective is not a commune. Members do not live together; they are spread out on various people’s land over several miles.

Long Spoon is best thought of as an experiment to transform local relationships of exchange. Long Spoon is inspired by the 19th century Russian anarchist Pyotr Kropotkin, who believed that capitalism creates poverty and artificial scarcity; as an alternative, he advocated an economy based on voluntary cooperation. Similarly, Chase thinks that humans thrive best in a gift economy in which goods are freely given. Members of a gift economy, like the Trobriand Islanders of the South Pacific, offer food and services for free, with the unstated expectation of reciprocity in the form of shared work, land or technical expertise.

As an example of a gift economy at work, Chase cites a neighbor he met last year at a coffee shop who was planning to pay a substantial amount to have an unused house on his property torn down. Chase said the Long Spooners would do it for free, if they could take the wood. “Sure!” said the neighbor. The Long Spooners demolished the house, leaving a clean concrete slab. In gratitude, the neighbor gave them the use of some fertile bottomland to farm and a monetary donation. This summer, in front of the neighbor’s house the Long Spooners will hold a “crop swap,” where people will bring harvested crops they can’t use and pick up what they want, all with no money exchanged.

The wood from the demolition site was used to carry out the second prong of the Long Spoon strategy: building, out of reclaimed wood, tiny houses—less than 150 square feet—for members of the collective. Each house has gravity-fed plumbing powered by hand pumps and one solar panel. So far, the Long Spooners have built or converted seven such structures. Five of them were lived in over this past, bone-chilling winter—all occupants survived and learned a great deal about resilience.

The Long Spoon Collective takes its name from the parable of the long spoons. A man dies and is escorted by an angel through the afterlife. In Hell, they witness a feast laid out on a banquet table. But those at the table can’t eat because long spoons, splinted on both arms, prevent them from bringing food to their mouths. They moan in hunger and wallow in misery. In Heaven, the same scenario is repeated. Here, however, banqueters extend their spoons across the table and feed each other. The souls are smiling and well nourished.

This spirit of sharing is at the heart of the Long Spoon vision. Chase, Frank, and the other two core members of the collective share not only one bank account, but two cellphones.

“We are focusing on habits,” Frank says. “The four of us happen all to wear size 10 shoes. So if we go to each other’s places and one of our shoes gets messed up we just step into another’s. We don’t think in terms of ‘I.’ We think in terms of ‘we.’”

Shoe size aside, the question becomes: Who is “we”? That question has vexed both Chase and Frank. When they met at Skidmore College in Saratoga Springs, New York, Chase was one of two white students in a cohort of 40 in his class who were part of a New York state-sponsored program to attract low-income students. Frank was not among them, but alienated from his college’s culture of upper-middle-class privilege, he was drawn to the group.

After graduation, Chase decided to pursue his Kropotkin-inspired dream on his home turf, and Frank joined him. In Field of Dreams fashion, they hoped that if their friends from Skidmore witnessed their idea of a multi-ethnic community focused on changing the way resources are redistributed—they would come. But they didn’t.

Cassandra, Chase’s girlfriend, who is African-American, explains, “For people of color, there is a stigma attached to this way of life, living without money and living off the land. It is precisely what my grandmother wanted to get away from. But there are in fact African-American groups migrating out of the city. It’s just a question of bridging the divide.”

The people who did come, initially, were white (primarily women), in their fifties and sixties—folks from the neighborhood who were inspired by the Long Spoon vision and had the time and resources to collaborate.

One of these women, 65-year-old Chris, first shared the long spoon parable around her kitchen table. “It’s about taking back our personal power,” she says, “reclaiming the ability to build our own houses, grow our own food, make our own entertainment, while simultaneously giving back to the earth what should never have been taken in the first place.”

The Long Spoon vision is bigger than the Hudson Valley. Says Chase, “We’re thinking about how to create larger systems to support towns and communities and to expand from there.”

Long Spooners recruit new community members in an informal, one-on-one manner. But theirs is a loose association rather than a structured organization. The group is currently more focused on building community and gardening collectively than on endlessly talking about their internal dynamics.

They are all, however, committed to the idea of collaborative leadership. Jared, one of the Long Spoon’s younger members, describes the trajectory he envisions by quoting Ben Falk, the permaculture designer and author: “Respect the changing nature of the future. Stewardship implies dominion, whereas partnership implies coevolution.”

The Long Spooner vision is ambitious and engaging. What remains to be seen is whether the loose structures they have developed for partnership are strong enough to survive the inevitable physical—and psychic—storms ahead.