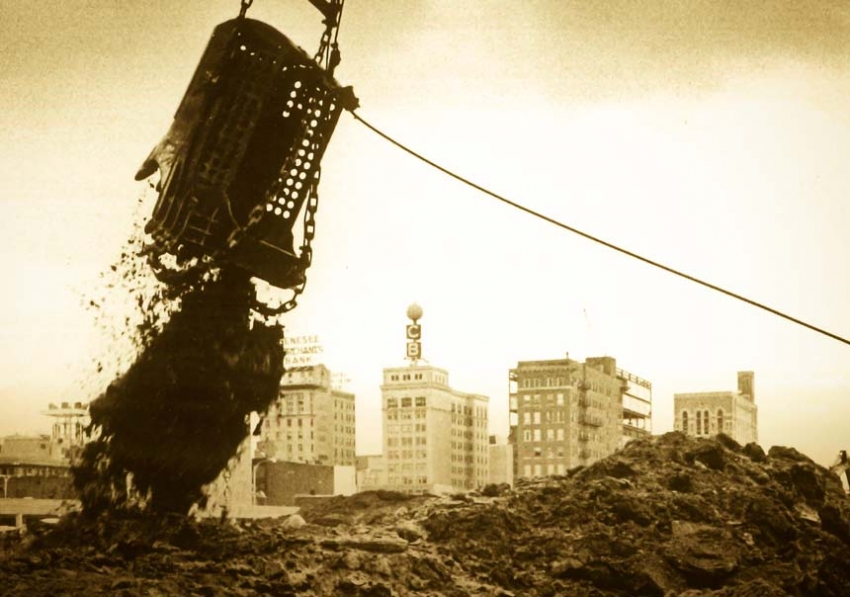 In Flint, Michigan, the Wrecking Ball Has Not Meant Progress

Andrew Highsmith charts the rise and fall of Flint, a city deserted by industry and divided by segregation.

It turns out that the little guy can take on corporate America and win—if only for a while, and if only he’s white.

Once upon a time, there was a town. For a while, it existed more or less peacefully. But one day, the residents of an outlying neighborhood decided to secede. Their prospects for economic growth depended on acquiring more land and establishing their own government to look out for their interests. The campaign for suburbanization made many townspeople angry. Finally, a few secessionists accused several secession opponents of being tools of Satan and, after a series of show trials, condemned them to death by hanging or being crushed under rocks.

Perhaps the only way to make a witch trial dull is to frame it as a dispute over municipal boundaries, but the historical evidence suggests that just such a dispute was a key part of the context in Salem, Mass., 300 years ago.

Reading Demolition Means Progress: Flint, Michigan, and the Fate of the American Metropolis, Andrew Highsmith’s powerful history of that city’s rise and fall, you get the sense that if you could explain racism and carburetors to the denizens of 17th-century Massachusetts, the rest of Flint’s history would sound very familiar. On one level the book tells a 20th-century story about deindustrialization and the misfortune that befalls any town unlucky enough to depend on a single industry (cars) or a single company (General Motors) for its economic vitality and civic identity when that company decides it can make more money elsewhere. The title, which comes from placards placed in shuttered GM factories’ windows throughout Flint, is a nod to the city’s constant ill-fated attempts to reinvent itself.

But on another level, Demolition Means Progress is a story of how people—in this case, the founding fathers of Flint’s white suburbs—used municipal government as a weapon, drawing borders of citizenship to exclude people of color and the poor from the region’s wealth. That’s a story that played out in metropolitan areas across America in the decades after World War II. But it was particularly devastating in Flint.

Highsmith sets up Flint’s postwar history as a struggle between three main groups. The city’s white residents are split into “metropolitan capitalists” and “suburban capitalists”: On one side, the mostly GM-affiliated urban elites who radically reorganize the city to help maximize their profits; on the other, white families and suburban officials who want to establish their own local governments to help maximize their property values. Then there are Flint’s black citizens, seen as a nuisance or a threat by their white neighbors, but who nevertheless press their own case for equal access to employment, schools and civic life—sometimes successfully.

At first, the metropolitan and suburban capitalists seem to be on the same team, reveling in Flint’s prosperity (usually at the expense of African Americans, forced into more dangerous, lower paying jobs; worse housing; and unequal schools). But when the two capitalists do face off, the fight is a rout: GM’s schemes are repeatedly defeated by white suburbanites determined not to share their tax dollars or addresses with what they see as a failing—and increasingly dark-skinned— city. It turns out that the little guy can take on corporate America and win—if only for a while, and if only he’s white.

Demolition Means Progress begins with the birth of the auto industry in the early 1900s and the conversion of Flint, GM’s home city, into a booming manufacturing center. From the beginning, Flint’s “progress” was a story not only of rapid development, but of racial segregation. In the 1910s and 1920s, the housing erected to attract migrant workers and feed GM’s enormous appetite for labor was whites-only. During the Depression, looking to stamp out labor strife, GM industrialist Charles Mott established a world-renowned network of community schools providing adult education, healthcare and job training, as well as gathering space. But Mott drew the schools’ attendance boundaries along black-white lines, reinforcing segregation. White neighbors, meanwhile, created formal and informal agreements not to sell or rent to blacks, and violently intimidated those black families who dared to cross the color line. From Washington, the FHA assisted with openly racist mortgage and urban planning policies.

But for the “suburban capitalists,” this wasn’t enough. After the war, GM began building new plants outside the city limits, lured by low taxes, cheap land and federal subsidies for decentralization (a policy meant to protect against nuclear attacks). With the auto jobs and industrial tax base now in the suburbs, and an FHA-subsidized suburban home building spree in full swing, Flint’s white homeowners now realized they no longer needed the city at all. By mounting aggressive campaigns in the 1950s and 1960s to form independent suburbs, they could hoard most of the region’s economic resources. By adopting “colorblind” zoning—local ordinances that can require home-building specifications that put housing beyond the reach of people below a certain income—they kept their towns nearly all-white long after explicitly racist housing policies became illegal. And in the process, they condemned Flint to poverty.

The source of Flint’s (now suburban) wealth, however, would soon disappear. By the 1950s, GM was building facilities in other parts of the country to make the supply chain more efficient; by the 1970s, national economic troubles and automation began to devastate Flint’s economy. At one point before the 1973 energy crisis, GM employed over 75,000 people in the Flint area; today, it’s barely over 8,000.

But more than the well-known story of GM’s abandonment, the secession of the suburbs seems like the climactic event of Flint’s decline.

The bleakness of Highsmith’s story makes his attempt to frame the book as a narrative of reinvention and revitalization in the last few pages seem like a jarring departure. Sure, to be human is to be resilient, and people will struggle for something better no matter the odds, as we hear from Flint’s corporate executives, civil rights activists and union leaders, as well as the owner of an LGBT-friendly café.

But when Highsmith compares Flint to Pompei after Mount Vesuvius’s eruption, writing, “Flint no doubt will prove to be equally resilient because, in the parlance of urban renewers, decline is but a synonym for opportunity”—as he does on the book’s very last page—it’s hard not to ask: What is he talking about?

I suppose the murders three centuries ago in Salem are also a kind of opportunity: The city is now full of witch-themed tourist merchandise. But as with city-destroying volcanoes and specious executions, the fact that Flint’s history may offer some kind of new opportunities feels secondary to the deep, often irreparable, human suffering it contains. Most of the time, as the rest of Highsmith’s story makes clear, demolition doesn’t actually mean progress.