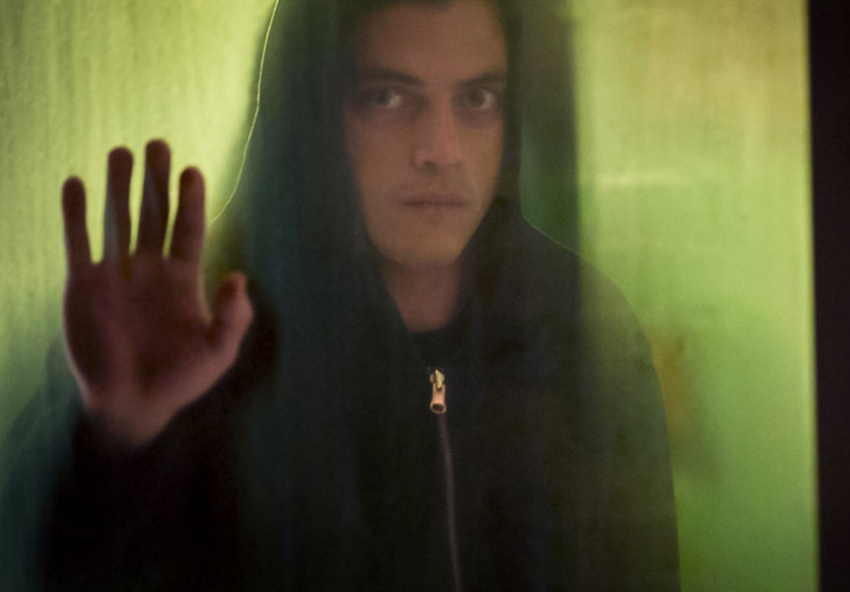 Mr. Robot Is the Anti-Capitalist TV Show We’ve Been Waiting For

What truly makes the show different—which most critics have either ignored or glossed over—is what provides both its animating spirit and its primary narrative engine: a deep, visceral hatred of modern-day capitalism.

The USA Network is not exactly synonymous with prestige drama. This is a channel currently airing the third season of Graceland, a show about undercover FBI, ICE and DEA agents who all live together in a fricking house. (Imagine that pitch meeting: “Guys, what if we remade Melrose Place, only populated it with characters from J. Edgar Hoover’s id?”) How delightfully incongruous, then, that USA is now the home of Mr. Robot, the best new TV show of the summer, and the most explicitly anti-capitalist work of mainstream pop culture since Snowpiercer.

Mr. Robot is narrated by Elliot (Rami Malek), who addresses the viewer as “friend,” one he believes he has made up to cope with his loneliness. As that suggests, Elliot may be suffering from mental illness, although the extent of it is unclear—one of the ongoing mysteries teased along throughout the season.

What is clear is that Elliot is a paranoid, rabidly asocial computer savant who is self-medicating on morphine. A network technician by day, Elliot is a “hacker vigilante” by night, anonymously tipping off police to online child pornography rings and gangbangers bragging about murders in code on Twitter. His daytime employer is a cybersecurity subcontractor helping the massive conglomerate E Corp.—which Elliot always calls Evil Corp.—fend off an increasingly intense series of cyber attacks. (In a nice touch, series creator Sam Esmail straight-up jacks the old Enron logo for E Corp., reasoning in one interview, “it’s not like they’re going to sue us for it.”) Because of his connection to E Corp., Elliot finds himself recruited by the mysterious “Mr. Robot” (Christian Slater) to join the hacker collective society, which wants to take down the company.

Mr. Robot has become a critical darling, and it’s easy to see why. For starters, it’s built around the performance of Malek, which is phenomenal, an unusual combination of intelligence, deadpan affect and charisma. It’s also one of the better-looking shows on television, with a visual aesthetic that alternates shots of perfect symmetry with ones framed from slightly off or tilted angles, creating an unnerving beauty. (This was especially the case for the first and fourth episodes, directed by Niels Arden Oplev and Nisha Gantara, respectively.) And the writing is generally excellent: witty dialogue that’s rarely cloying, genuinely surprising plot twists, and realistic characterization. There’s also a pretty great musical score by Mac Quayle, borrowing heavily from the playbook of rattling snare taps and spooky synths that Trent Reznor and Atticus Ross have employed in David Fincher’s most recent films.

But what truly makes the show different—which most critics have either ignored or glossed over—is what provides both its animating spirit and its primary narrative engine: a deep, visceral hatred of modern-day capitalism.

That loathing is front and center in the series’ opening scene, in which Elliot confronts the child pornographer in person. At first, the man thinks Elliot is trying to blackmail him and angrily refuses to pay a cent. But as Elliot reveals his M.O. of turning cybercriminals over to the police, the pornographer grows desperate and pleads with Elliot, promising to pay any amount. But Elliot dashes his hopes, telling him seconds before the police burst in, “I don’t give a shit about money.”

We learn, however, that this indifference is feigned; in fact, he hates money.

“Sometimes I dream about saving the world, saving everyone from the invisible hand,” Elliot tells his “friend” during one monologue, over a montage of a coworker making his monthly minimum school-loan payment and waiters scrambling for tips. “The one that brands us with an employee badge. The one that forces us to work for them. The one that controls us every day without us knowing it. But I can’t stop it.”

He can’t, that is, until Mr. Robot comes into his life, tempting him to take down E Corp., which “happens to own 70 percent of the global credit industry.” If they manage to destroy the company’s servers, Mr. Robot promises, “every record of every credit card, loan and mortgage would be wiped clean …[creating] the single biggest incident of wealth redistribution in history.”

On one hand, the idea that 70 percent of the global credit industry would be consolidated into one company is as absurd as anything concocted by the minds that gifted us with Graceland. On the other, however, if television shows act as a reflection of our fantasies, are there many better ones than a society-wide debt jubilee? And that plays a large part in what makes the show so gripping, particularly in comparison to other shows: at the level of our desires, the stakes have rarely been higher.

Indeed, Mr. Robot succeeds by taking the premise of a pulse-pounding action film like The Matrix—one group’s struggle against the dehumanization and alienation of late capitalism—and then removing all the metaphorical dressing (evil sentient robots, virtual reality) and making the damn thing literal. Turning the subtext into the text itself has some drawbacks; the pleasures of subtlety are mostly absent from Mr. Robot. (At one point, a villainous corporate executive literally pays cash to a homeless man for the license to beat the shit out of him.) But by placing class warfare front and center, Mr. Robot makes socialism a vibrant force again in popular culture, its aims urgent and compelling.

It remains to be seen, however, if Elliot is right and viewers are “friends” to the idea of an epic redistribution of wealth, or if he’s crazy to think so.