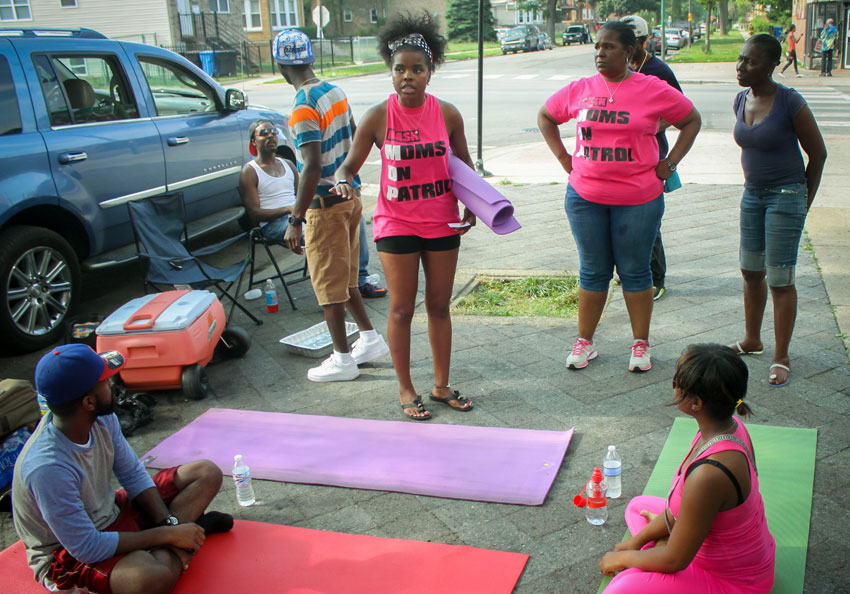 The group wants to make one thing clear: Young black men are not the enemy.

Safety is what everyone we talk to in Englewood wants—safety and respect from the police. They are not willing to settle for a false choice of one or the other.

On Monday, June 29, Mothers Against Senseless Killings (MASK) took a novel approach to countering bloodshed in the South Side Chicago neighborhood of Englewood, the setting of Spike Lee’s forthcoming film Chiraq and an area the media calls “violent,” “troubled” and “murderous.”

Six days earlier, a shooting on the corner of 75th and Stewart had killed one woman and injured two others.

Hoping to prevent retaliatory violence, the “army of moms” planted folding chairs on the southeast corner of the intersection and spent the afternoon chatting with passersby and dispensing hugs. The next day, they were there again. They plan to return daily from 3 p.m. to 7 p.m. until the public school year resumes after Labor Day. So far, there have been no shootings on their watch.

“As a mother, you will do whatever you can to protect your kids,” says MASK founder Tamar Manasseh, 37. A rabbinical student, she was raised in Englewood and has a 16-year-old daughter and a 19-year-old son. “[Even] if that means sitting out on the corner for the entire summer.”

While some other groups that use “positive loitering” as a violence-prevention strategy aim to clear the streets, MASK affirms the right of youth to be on the corner.

They need a “non-threatening kind of engagement. … It’s all just love,” says Damani Bowden, 41, slapping the hand of a passing teenager. A Ford assembly line worker and father of three, he is one of several men who participate in MASK.

“The vast majority of these guys aren’t doing nothing wrong—nothing illegal, nothing immoral, they’re just hanging out,” Bowden says, pitching his voice to include the teenager, who is nodding. “But they have to suffer because of the perception that everybody out here is on some B.S.”

A week after MASK set up their chairs, newspapers reported something unusual: There had been no shootings in the neighborhood over the July Fourth weekend, a time when gun violence usually spikes. The previous year, there had been 10 shootings in Englewood, two within sight of 75th and Stewart.

It’s hard to say whether the pause is significant. It was the first peaceful July 3 to 5 in Englewood since 2005. But Asiaha Butler, founder of the five-year-old Resident Association of Greater Englewood (RAGE), points out that the media sensationalized the July 4 “miracle” as though “someone is shot every day in Englewood, which is not true.”

In fact, there’s a murder in the neighborhood about once every nine days, and roughly once a year someone is killed within eyeshot of 75th and Stewart. Yet since the June 23 shooting, the corner has already witnessed another homicide. It was at 4:30 a.m. on Saturday, July 18, long after MASK members had gone home. The victim, Jemel O’Brien, 29, lived on the block.

The neighbors, though fond of MASK, are skeptical that it has deterred crime. Most violent crimes are not committed in broad daylight. MASK members themselves have differing views: As one says the corner has grown calmer, another shakes his head.

It’s possible MASK is making an impact in another way: on the police, who keep a tight grip on the corner. Squad cars roll by every 5 to 10 minutes. Manasseh believes that police refrain from arresting teenagers for minor offenses when MASK is watching, which in turn keeps the kids from getting the criminal records that limit future opportunities.

“It’s still very much Alabama in the 1960s,” says Manasseh.“It’s very much an overseer, sharecropper kind of deal out here. The police have no vested interest in this community. They don’t live here; they don’t have parents that live here, or nieces and nephews. They don’t care.”

Several MASK members say the police have asked them to leave or told the corner kids not to talk to them, without giving a reason. The Chicago Police Department did not respond to requests for comment.

MASK finds itself at the intersection of two interrelated problems: the violence that frightens neighborhoods and imperils bystanders, and the policing that presumes criminality.

The Black Lives Matter movement is working at this intersection as well. When activists shine a light on police killings of young black men, they are inevitably accused of overlooking the problem of “black-on-black crime.” While this charge often emanates from white defenders of police tactics, Black Lives Matter organizers acknowledge that in order to rein in the power of law enforcement, the movement must offer a radically different vision of safety, one that does not rely on police and prisons.

Safety is what everyone we talk to in Englewood wants—safety and respect from the police. They are not willing to settle for a false choice of one or the other.

In the field of criminology, the jury is out on whether police prevent crime. Most research indicates that the threat of punishment rarely deters criminals and that putting more police on patrol increases crime reports but does not decrease incidents. Studies show that police spend 80 to 90 percent of their patrol time on non-criminal matters, such as traffic violations.

“We’ll know Black lives matter when public safety responses aren’t defined by arrests or prison admissions but by work to reduce contact with the criminal justice system in the first place,” wrote Nicole Porter of Washington, D.C.-based prison-reform group the Sentencing Project in a Huffington Post op-ed. She notes that preventive community programs like urban farming can reduce crime rates.

MASK’s work is in line with these interventions, but this kind of change takes time. What’s clear is that it has momentum: Membership has doubled from 10 to 20, residents of the block are joining the effort, and about 15 kids (the “MASKeteers”) return regularly. The group has begun hosting activities like relay races and martial arts classes at 75th and Stewart, and has expanded to another corner, with plans for a third.

RAGE’s Butler emphasizes the need for long-term efforts. “No one is going to have the magic formula to solve all of the ills of Englewood.”

“It’s about psychology, about why [kids commit crimes] in the first place,” says Manasseh. “They’ll tell you, ‘I have a record,’ and it just sounds so hopeless. And I hate to hear that in a 19-year-old kid. You have so long to live. … You want to find a job? We’re gonna go look for a job. You want to get something off your record? Let’s find a way.”

Asked if this could be called street corner social work, she laughs. “That’s a mother’s job—we’re unpaid social workers.”

Lillian Osborne is a former In These Times editorial intern whose writing has appeared on Truthout and Mondoweiss, and in the Loyola Phoenix. Jessica Stites is deputy editor of In These Times.