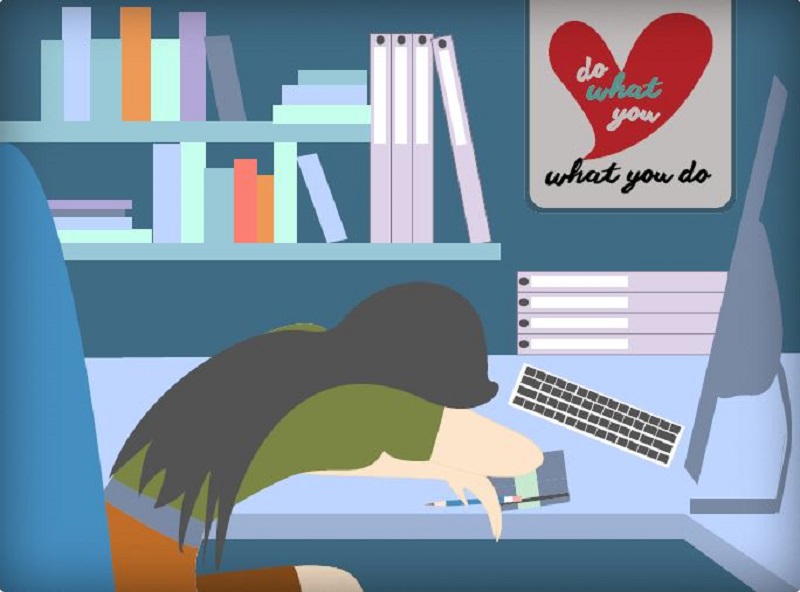 The "Do What You Love" dictate targets women with particular force, since caretaking and other "women's" work is assumed to be a labor of love.

Fall In Love with Your Job, Get Ripped Off by Your Boss

Miya Tokumitsu’s sharp new book exposes the “Do what you love” fairy tale for what it really is: a means of exploitation.

Workers are tantalized by the proximity of a ‘dream job,’ keeping their noses pressed against the glass in the belief that the sheer force of their longing will shatter it.

“Do what you love” is not a new mantra. Since at least the 1980s, when individualistic ambition was elevated to a national virtue, Americans have taken for granted that good work should reward the soul. It sounds so obvious, so optimistic: How better to escape work, that dull scourge of existence, than by finding a way to turn it into its opposite—leisure, pleasure, creativity, joy?

Do What You Love: And Other Lies about Success & Happiness, Miya Tokumitsu’s short, sharp and timely new book based on her hit Jacobin essay “In the Name of Love,” stabs plenty of pins into this heart-shaped balloon. In today’s increasingly freelance economy, DWYL has become a convenient way for corporations to pay fewer people less money for more work. If work is what you love, after all, why do anything else? We’ve come a long way, Tokumitsu argues, from the traditional Protestant work ethic, which held that laboring to make money was virtuous precisely because it wasn’t enjoyable. Drudgery was dignity, and the reward lay in heaven, or at least retirement. We no longer live in self-denying times. “Today, ideal work is the combined pursuit of pleasure and capital,” Tokumitsu writes. Just ask the beaming CEO giving the commencement address.

Tokumitsu sees the mantra leveraged on three levels, correlating to the executive, middling and entry-level “rungs” of employment (though they no longer form a ladder one can predictably climb). At the top, “passion” rules. Workers who have achieved the fantasy trifecta of wealth, status and power must continue to prove their commitment by staying later at the office than anyone else, and remaining visibly connected (via social media and email) to their professional worlds even off the clock. As Tokumitsu notes wryly, “ideal love is nothing if not constant”—even though studies show that people who work “heroic” hours are unproductive, miserable and liable to get sick.

The pressure to perform is exerted by competitive office cultures and job insecurity, and affirmed by popular culture— Tokumitsu cites two television shows, Enlightened and The Good Wife, each of which romanticizes the workaholism of a woman in a white-collar job. In the first, a sales executive (Laura Dern) loses her professional status and, as a consequence, her sense of identity. In the second, a lawyer (Julianna Margulies) finds personal gratification by returning to her job after years out of the workforce raising her children. The Good Wife pushes work-as-fantasy so far that viewers can even buy furniture from the on-screen office for home use. In real life, however, a woman returning to the workforce after a hiatus, even a senior executive, is far more likely to see her career plummet than soar, making The Good Wife a particularly fraudulent form of professional wish-fulfillment.

For lower-level, white-collar and corporate workers, the DWYL drumbeat is somewhat muted—though Tokumitsu still discerns its effect in pressure to exhibit attitudes of “insistent happiness” at work. Tokumitsu also notes that the rise of DWYL correlates with the glut of micromanagement such as employee surveillance and relentless performance assessments, which seem to exist only to justify middle-management positions. As skilled workers lose their autonomy and give up authority to omnipresent managers, DWYL may be most appealingly rephrased as do what you like—it’s a fantasy of what work could be without stifling oversight.

In all these different arenas, the DWYL fairy tale motivates by decoupling work and money, insisting that workers should be fulfilled by work itself, regardless of salary. It therefore excludes those who may be working the longest (and least lovable) hours of all: the minimum-wage workers who brew the morning coffee for the stressed executives and empty the wastebaskets after dark at the starchitect’s gleaming offices. There’s no reason a worker might not enjoy and appreciate this work, if it paid decently and offered benefits and security. But the mantra insists workers should love work for itself, rather than as a means to an end. More sinisterly, because it also pretends that “work and class float free from each other,” DWYL implicitly assumes that everyone has the same options to follow their heart, and denigrates the worker who “chooses” not to.

Tokumitsu argues that DWYL targets women with particular force. Work that is traditionally gendered female “is often assumed to be done out of love”; it’s women’s supposedly innate nurturing instincts that draw them to nursing, teaching and care work, not a desire for high pay or high status—perhaps one reason why teachers and nurses who strike or protest for better pay are often vilified. But in white-collar offices, too, DWYL culture pressures workers to exhibit joy and gratitude for the privilege of doing their jobs—attitudes that female employees are already especially rewarded for displaying and punished for lacking. In a world of disgracefully inadequate childcare provisions for workers, women often end up in the “flexible” freelance workforce, where the DWYL ethos reigns supreme.

The logical endpoint of such thinking is “hope labor,” a term Tokumitsu borrows to describe the combination of self-delusion and systemic abuse that keeps a steady stream of unpaid interns (77 percent of whom are female) flocking to donate their labor to government agencies, nonprofits and private companies alike. Hope also keeps adjunct professors and minor-league baseball players in their downtrodden place, doing work that is basically identical to that of their full-time, highly visible colleagues but for which they receive just a fraction of the pay and not a crumb of the respect. All these workers are tantalized by the proximity of a “dream job,” keeping their noses pressed against the glass in the belief that the sheer force of their longing will shatter it. Tokumitsu crisply contrasts this “timorous longing” with the concrete optimism that comes from livable wages, salary increases, long-term contracts and healthcare—not to mention slashing the student debt burden. But fighting together for better working conditions entails admitting that we are workers, not freewheeling, independent “creatives.”

But for how long? Tokumitsu is not alone in pointing out that work as we know it is changing, even disappearing. Over the past half-century, the capitalist dogma of relentless economic growth has had devastating effects on the planet, while technology has advanced to the point at which millions of jobs in manufacturing, transportation and telecommunications are (or may soon be) obsolete. Together, these circumstances force us to reconsider what worthwhile and necessary employment looks like. DWYL may yet become a radical slogan, if it pushes us—all of us—to find meaning and joy in our lives beyond the capitalist imperative. But as career advice, it’s a disaster.