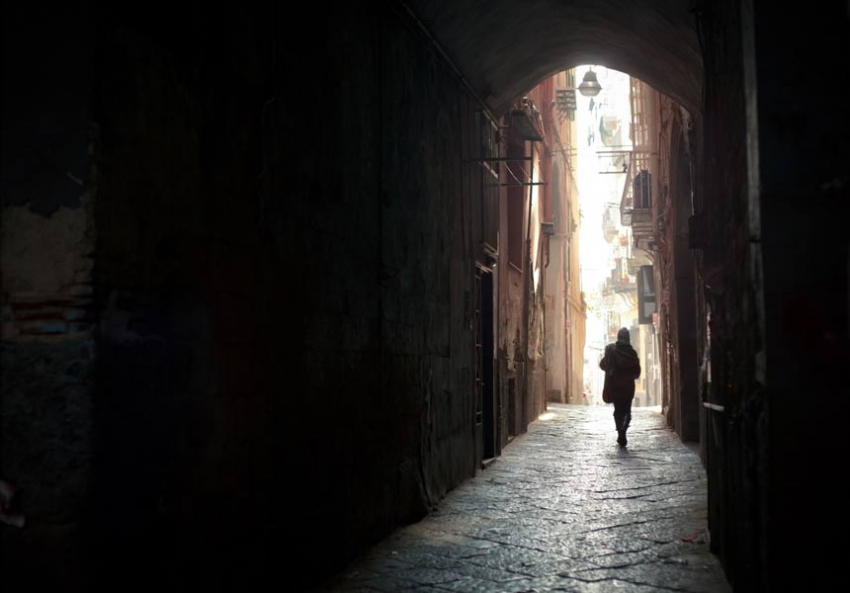 Ferrante is deeply candid in her writing, but publicly she is absent. (Giuseppe Parisi / Shutterstock)

In Elena Ferrante’s Neopolitan Novels, Women’s Rage Is Both Pardonable and Malevolent

Desperate feelings of love and of disgust, horror at how intimately children remain a part of their mother’s bodies even as they pull violently away from them—these are contradictions and crises at which she excels.

Part of the mystery and fascination of Elena Ferrante’s four Neapolitan novels lies in our never being sure whether this is fiction tricked out as autobiography, or the other way round. It’s a vast story about two women’s lives, their work, their relations with men and with their children, and the effect on all these things of schooling, education and literature. It takes the two friends at its centre from their birth in 1944 to their late sixties.

I don’t think I’ve read a more intelligent and imaginative work about contemporary women’s lives, nor one that articulates so bravely the difficulties inherent in such an enterprise. The two friends at its centre make this possible: Lila and Elena, two girls born in the slums of Naples, meet on their first day at school. They are opposites and alike, Lila “very bad” and dark, Elena just “bad” and fair; Lila brilliantly clever, Elena clever and diligent. The novels entangle them through the men they love and the children they bizarrely share, and send them in different directions as rivals, opponents, each other’s first critic.

Elena continues her education, becomes a novelist, travels the world and marries into the liberal intelligentsia. Lila marries a local grocer in her teens, never leaves Naples and becomes a successful tech entrepreneur. For all her brilliance, and as a powerful woman in the neighbourhood where the girls grew up, Lila is frustrated and imprisoned in her life, while Elena seems free to choose how she lives. Their lives diverge in earlier volumes, but in this last one, The Story of the Lost Child, Elena returns to Naples, stung by unhappiness and at an impasse in her writing. The two women become pregnant at the same time, and Elena moves into the apartment above her friend’s.

History and politics are significant in these lives: the Camorra, Naples’ very own Mafia, and the political hatreds simmering in the neighbourhood affect their tumultuous relationship.

Ferrante has been at her most ferociously candid when writing about being a mother and being a daughter. In a recent interview with the New York Times, she said, “Children always remain an inescapable knot of love, of terrors, of satisfactions and anxieties.” Desperate feelings of love and of disgust, horror at how intimately children remain a part of their mother’s bodies even as they pull violently away from them—these are contradictions and crises at which she excels. Women’s rage is her forte, but it isn’t a righteous rage. She suggests that beneath a pardonable indignation at what life throws at many women, there may lurk a dangerous malevolence waiting to burst out and do maximum damage.

The Elena in the novel becomes a successful writer: famous, rich, in demand as a speaker. Ferrante is now famous, too, and admired all over the world. But she refuses to publicise her books or even to emerge from behind her invented name. She’s done the hard bit, she says, in writing the books.

In fact, she’s given wonderfully interesting interviews to both the New York Times and the Paris Review, which are without didacticism or self-revelation. But there are no photographs, no details. Her writing is very much a woman’s writing, yet her alter ego in the book is given to repeating from time to time that women are men’s invention and that there can be no escape from literary traditions that are mostly male. Education inserts itself between women’s lives and their written accounts of those lives, encouraging them to accept condescension in men’s valuing of what they write as no more than they deserve. Elena is grateful for her education and her reading. They have allowed her to write, the only way she knows to contain and even counter violence, disorder, unruliness. Yet she also knows that if her friend Lila were to write her version of a woman’s life and experience it would outdo her own in some ways, would break through a self-imposed reticence and control to create something entirely new. Ferrante’s Neapolitan novels contain both voices, Elena’s and Lila’s, in combination, in discord and separately. It is only with both voices, Ferrante seems to be saying, that the hidden and unruly lives of women may be heard and understood.