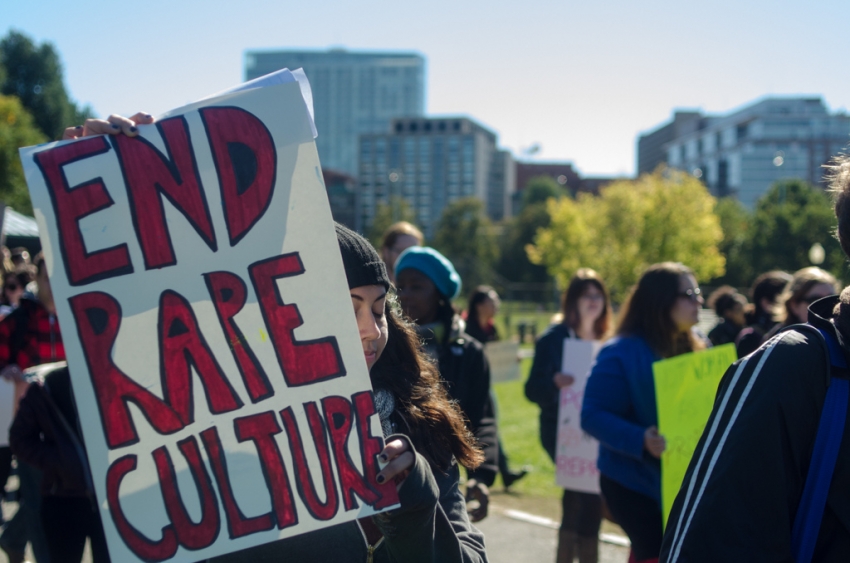 Why Walking Down a Dark Alley at 2 A.M. Is Not ‘Asking For It’

In a new book, Kate Harding explains why dictums to avoid rape are part of rape culture–and do more to shame us than protect us

The most admirable part of Kate Harding’s Asking For It: The Alarming Rise of Rape Culture – And What We Can Do About It is how patiently it attempts to explain a problem that can feel nearly impossible to get across. As she notes, the very phrase “rape culture” tends to turn people off:

It sounds so extreme at first that I confess even I, a proud feminist, initially balked at the term. … Isn’t such overblown terminology the kind of thing that makes people call feminists “humorless” and “strident” and accuse us of holing up in our ivory towers, theorizing about human behavior without ever witnessing much of it?

It’s true that “rape culture”—the idea that we might live in a world that actually facilitates rape, particularly men raping women, so that the threat of rape can be used to keep all women in line—sounds flat-out dystopian at first.It’s also so embedded in the culture that it’s nearly impossible to spot: You don't notice rape culture, like you don't notice oxygen or gravity, in part because you've probably never gone without it. You could cite, as Harding does, the fact that convicted rapist Mike Tyson is now cast as a harmless kook in comedies like The Hangover and How I Met Your Mother; the fact that, in multiple movies and TV shows (Crank, Game of Thrones) rapes are presented as something the victim actually enjoys by the end; the accusations of “overreacting” and “militancy” aimed at those who believe Roman Polanski should serve prison time for raping a pre-teen, or that Julian Assange should be tried for date rape; the frequent mishandling of rape cases by the police, or the brutal attacks on women’s character when they bring those rape cases to trial; the climate of fear women live in, the constant messages that women should avoid doing certain things (wearing short skirts, drinking at parties, going to parties) unless they “expect” to be raped, and that they are somehow less worthy of compassion or justice if they “fail” to protect themselves.

Harding does spell all of this out, and does a great job of backing her case up with real incidents, some of which—like the story of a Philadelphia detective who referred to the sex-crimes unit as the “Lying Bitches Unit”—will turn your stomach. But she also dives into the most telling manifestations of rape culture: the moments when it becomes clear how the culture harms not just rape victims, but everyone. These are often apparently innocuous incidents. They’re the moments when you suddenly realize the gravitational force that's been holding you down.

One example: I have had, in my life, at least two arguments with men who couldn’t see why I was frightened of something. One man didn’t understand why I wouldn’t take a subway train alone, after midnight, when leaving a party. Another had a “no smoking” rule in the house and didn’t like that I would smoke out the window, rather than going outside, if I was up all night on deadline. These men weren’t obtuse, or sexist, or hurtful. They each had a point: It was a bother to chaperone me; breathing secondhand smoke is gross. But I had a point: It was unfair to ask me to risk my safety. Those men, very honestly, and with the best of intentions and politics, did not see any threat to my safety. For them, going out alone at night was just something you might have to do occasionally. For me — for most women — it had been the subject of innumerable lectures and lessons, dozens of jokes and snide comments about women who didn’t take responsibility, headlines, friends’ horror stories, the flashing red warning light in my brain that told me to watch the clock and watch my back because you know what happens to girls like that, don’t you.

I’d never realized that living in a sexist culture — and, yes, a rape culture — had such an impact on my choices, or how constantly I felt the obligation to “protect” my body from unwanted touching or sexual attention, until I realized that I could not imagine feeling safe enough to stand on my own doorstep at 2 a.m. Meanwhile, the person I slept next to every night couldn’t imagine feeling any other way.

Harding is excellent on this burden of fear and exhaustion, and the impossibility of doing everything “right,” pointing to the pattern in which a woman followed every “rule” for outwitting or avoiding an attacker and was still blamed by the media for the fact that the rape occurred. Ever been told you should always go to a bar with friends, so you can watch out for each other? One woman went to a bar with several friends, was led through a side door by her attacker, and was raped while her friends stood at that very door, trying to get past the man guarding it, and frantically petitioning the bar's owner to help them. Those friends were told not to worry about what was happening on the other side of the door. Told that you should make a run for it, or go into a public place for protection? One woman fled from a man who had been following her, dove into a city bus for protection, was followed onto the bus by her attacker, and therefore got off the bus, at a stop right next to her home, and made a run for it. But her rapist ran faster, so columnists wrote scolding pieces about how she wouldn't have been raped if she'd stayed on the bus all night. Not only is this infuriating—every victim is automatically an unworthy victim, because the fact of being attacked means she's “failed”—the climate of fear doesn't actually serve to help women in any meaningful way.

Instead, the laws of rape culture, Harding writes, are a system of Catch-22s that wind up blaming every actual or potential rape victim.

“If we get assaulted while walking alone in the dark, we’re told we should have used our heads and anticipated the danger,” she writes. “But if we’re honest about the amount of mental real estate we devote to anticipating danger, then we’re told we’re acting like crazy man-haters, jumping at shadows and tarring an entire gender with the brush that rightly belongs to a relatively small number of criminals.”

Harding also illustrates how all these large and small incidents connect to form an overwhelmingly oppressive climate. Nearly every common instance of rape culture (except the actual existence of rape) could be harmless in another context. When comedian Daniel Tosh yells “wouldn’t it be hilarious if that girl got raped” at a heckler—another incident Harding covers—he’s just doing his job and shutting down a disruption. Unless, that is, the woman he’s yelling at has been taught to worry about, fear and try to avoid rape every day of her life, in which case he’s actively taking part in the culture’s use of rape threats to control her behavior. Unless he’s yelling it in a culture where (as Harding notes) there are many documented instances of women being raped while crowds watched, in which case it’s possible to interpret what he says as a viable threat. But, since that’s the culture we live in, one comedian’s “harmless” little bit of crowd work—his exploitation of a lifelong fear that he may not even fully understand—directly reinforces and continues the violent oppression of half of humanity.

It’s comforting to believe that people like Tosh (or the team behind Game of Thrones, or Crank, or the most vehement Polanski defenders, or, or, or) would behave differently if they saw the whole picture. If, for example, they read a good book on the subject. Which is unfortunate, since Rule One of Rape Culture, much like Fight Club, is that you never talk about Rape Culture.

It's this—the reaction to writing a whole book about rape culture, in a world that prefers not to talk about the problem – that I was curious about when I called Harding. “I said, ‘Oh, I’m not even actually getting all that blowback,’” Harding told me over the phone. “My agent was like, ‘Kate, have you read the fucking comments?’”

This is the last, ugliest post-script to Harding’s book: The fact that attempting to analyze rape culture means facing off against the sector of the public that believes “rape culture” is a myth, and that women who speak about it ought to be punished. Certain men will not find themselves pleased to be spoken of as part of the problem, or with the idea that there is a problem at all, and they can be quite volatile when disagreed with—when Harding realized she couldn’t write the book without including a chapter on the notoriously violent folks behind GamerGate, she says, it was a “shitty moment.” Readings (like an upcoming event in the Men’s Rights hub of Toronto) have to be planned around potential disruption. New waves of Twitter trolls have to be blocked.

“Those silencing voices that make people afraid to talk about rape, afraid to tell their stories for fear they’ll be harassed and ridiculed, that’s a big element of rape culture,” Harding says. “And that’s why they do that, because they don’t want people to speak out. … If we speak about this publicly, there is this vague specter of someone who might do something, and that’s asking hostile questions at a Q&A or that’s bringing a gun into an event.”

I ask Harding if she’s behaving any differently in the face of blowback. She begins to answer, then checks herself, “When you asked me that, I was about to perpetuate rape culture, because I was like, ‘Oh, I’m just doing commonsense stuff to protect myself,’ “ she says. “And then I realized, no, I’m winging it.”

“Rape culture” isn’t just violence. It isn’t just the appalling treatment of the victims of that violence. It’s lingering, ever-present fear: Fear of where you go, what you do, how you look, who you talk to, what you say. Some of us may never get up the nerve to stand outdoors at 2 in the morning. But to resist all that conditioning — even just by admitting that it exists — is, in its way, a victory. “Protecting” ourselves with silence and paranoia hasn't worked out so well thus far. We can, at the very least, disrupt all that cautious silence to make a bit of noise.