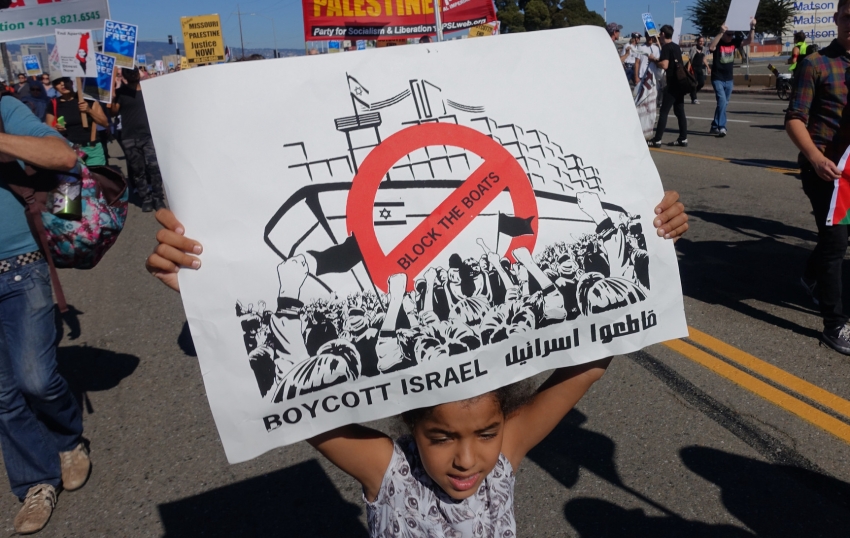 A young girl holds a sign at a "Block the Boat" protest in Oakland in 2014. (Steve Rhodes / Flickr)

The BDS movement has been racking up a series of successes lately and has caught the attention of many in Israel. But you wouldn’t know it from reading the Times.

Despite increasingly frequent victories for the global Boycott, Divestment and Sanctions (BDS) movement confronting the state of Israel, and the heightened panic expressed by its critics, the New York Times virtually ignores the movement’s momentum. When attention is paid to BDS, coverage doesn’t focus on the role of the movement in the struggle for Palestinian rights, but instead amplifies critics of BDS and focuses on charges that the movement is a form of antisemitism.

The BDS movement, initiated in 2005 by Palestinian intellectuals and activists, is a nonviolent resistance movement that calls for economic pressure on the state of Israel to recognize the rights of occupied Palestinians.

In a New York Times article about two failed divestment efforts that, according to the story’s lead, “dealt a blow” to “a pro-Palestinian economic campaign against Israel,” reporter Rick Gladstone acknowledged that BDS “has been gaining traction in the United States.” That throwaway line is the end of the story for readers, since the Times rarely covers successful BDS efforts, either in the US or abroad.

Although the Times did cover both the United Church of Christ’s vote and the Presbyterian Church’s vote to divest from companies that profit from Israel’s occupation of Palestine, here are seven recent BDS victories that were ignored by the Times:

When the Times does cover campus activism on the Israel-Palestine conflict, it opts to focus on the  debate about antisemitism instead of focusing on the role of divestment and boycott resolutions in the campaign for Palestinian rights.

A May 2015 front-page article by Jennifer Medina and Tamar Lewin, “Campus Debates on Israel Drive a Wedge Between Jews and Minorities,”centered on the idea that Jewish students are threatened and marginalized by BDS activism. Ali Abunimah later reported in the Electronic Intifada that Medina only asked Safwan Ibrahim, a member of Students for Justice in Palestine (SJP) at UCLA, questions about claims of antisemitism—ignoring the BDS movement’s tactics or motivations.

David McCleary, a Jewish member of SJP at UC Berkeley, said he felt like he was being given a Jewish “litmus test” by contributing reporter Ronnie Cohen, who apparently questioned McCleary’s Judaism in light of his involvement with SJP. “For them to find out that SJP at UC Berkeley is disproportionately Jewish interferes with that narrative that they are trying to invent,” McCleary told the Electronic Intifada.

An earlier story by Medina, “Student Coalition at Stanford Confronts Allegations of Antisemitism,” also focused on the “debate over what constitutes antisemitism” in light of the Stanford student government’s vote to support divestment—an event that the Times did not cover in its own right, but only as an opportunity to run a piece about a Jewish student’s experience of being asked about divestment.

Times reporter Adam Nagourney ended an article with a quote from Natalie Charney, student president of the UCLA chapter of the Jewish student organization Hillel:

People say that being anti-Israel is not the same as being antisemitic. The problem is the anti-Israel culture in which we are singling out only the Jewish state creates an environment where it’s OK to single out Jewish students.

Despite the reference to “the Jewish state,” the territory controlled by the government of Israel contains more Arabs than Jews–though most of the Arabs are excluded from political participation. Why does only activism in support of Israel’s disenfranchised majority, and not the defenders of Israel’s system of ethnic apartheid, prompt questions of campus bias in the New York Times?

Gunar Olsen is an editorial intern at Fairness & Accuracy In Reporting and a student at Fordham University. Follow him on Twitter at @GunarOlsen.