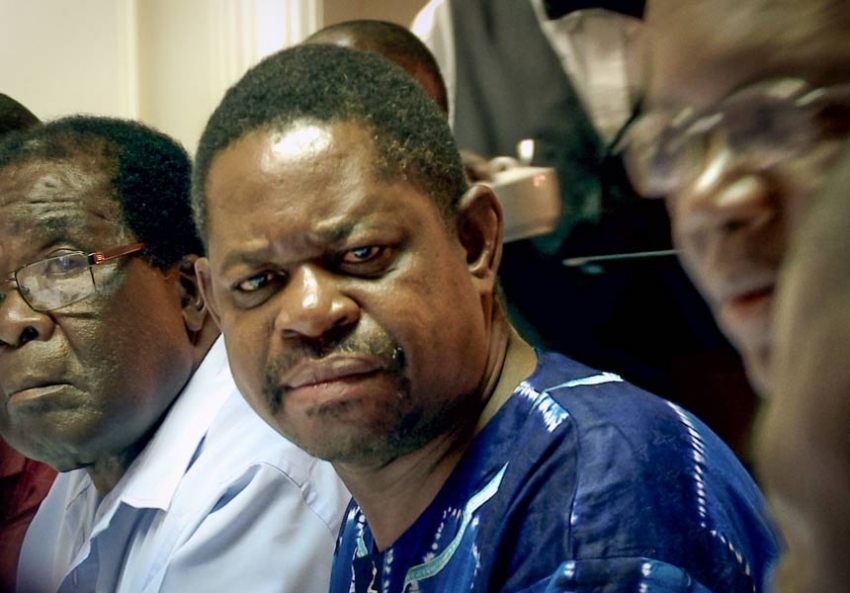 The Neverending Presidency: An Unfettered Look at How Democracy Lost to Mugabe

Camilla Nielsson’s new documentary, Democrats, is a study in how a dictatorship can weather a ‘democratic transition’

Nielsson has unfettered access. ... Mangwana and his staffers are often openly amused and honest about their party’s brutal tactics, disingenuous cant and realpolitick ambitions.

It’s happened so many times: A poor nation fights the odds and attempts to join the modern age by reinventing, yet again, the wheel of democracy.

What could go wrong? In postcolonial Africa, everything. Camilla Nielsson’s new documentary, Democrats, eyeballs the nitty-gritty of democratization in Zimbabwe since 2008. Watching it, you’re astounded by the degree to which these lofty political principles are subject to the petty wills and bald power-lust of men in cheap suits, haggling in conference rooms over the fate of a nation.

Zimbabwe is one of Africa’s longest-running postcolonial kleptocracies: Robert Mugabe has controlled the country by hook and crook since winning the war for independence in 1980. On top of hair-raising genocidal actions and human rights abuses, the country endured years of mismanagement and corruption so obvious that it was visible from the U.N. International and domestic pressure forced Mugabe to consent to the bipartisan writing of a constitution, to which he would then be subject.

Easier said than done. The agents of change here are Mugabe’s chief negotiator, the gregarious and splenetic Paul Mangwana (a great role for Forest Whitaker if this tale ever gets fictionalized), and the point person for the rival party, the calm, elegant and rather studly Douglas Mwonzora. Nielsson has unfettered access to both—which is astonishing, as Mangwana and his staffers are often openly amused and honest about their party’s brutal tactics, disingenuous cant and realpolitick ambitions. There’s never any talk about democracy from Mugabe’s camp, even as referendum meetings are jammed with voters bused in and paid to stump for the dictator, and are also often beset by mysterious goon squads threatening and beating any opposition supporter.

Facing this tide of corruption, Mwonzora is a model of Martin Luther King-ish serenity and rectitude, befriending the unpolished Mangwana and managing to twist this fierce but foolish man into ethical knots. As the face of the Mugabe machine, Mangwana has to manage Mugabe’s schemes (including having Mwonzora arrested at a crucial juncture), and the pressure looks like it’ll make him implode. The man’s predicament is early-Soviet: When an unsigned draft of the constitution is leaked, featuring a clause that excludes Mugabe from any future elections, Mangwana is cast as a “sellout,” which could get him killed.

Democrats boils the very essence of politics down to its fundamental moral conflict: doing what’s right vs. doing what you want. Mangwana becomes the compromised schmuck in the crossfire, a mob lackey reveling in his power but smelling doom in the air. The barely glimpsed Mugabe is unapologetically devoted to self-service. In his post-constitution speech (after the offending clause was amended), he sums up how things will remain the same by brushing aside the idea of democracy, noting how some people “do not understand where power is derived from.”

He gets a big laugh with the line, which suggests Zimbabweans are cowed into empathizing with his bullyboy displays of power. Something that should not sound unusual to Americans. “We are a nation of great pretenders,” one of Mwonzora’s assistants tells Nielsson, disgusted with how his countrymen bow before their stern patriarch. Memories are long in Africa, and just as the 1979 war is oft-invoked, so is the subsequent Gukurahundi, Mugabe’s seven-year genocidal campaign against protestors and dissidents that slaughtered over 20,000 people. Oddly, Nielsson never mentions the bloodbath; indeed, much of Mugabe’s legacy is left out, as if it was assumed we already knew.

Ideally we should, but like too many feature films that explore sociopolitical realities, Democrats seems to require an hour of Googling to flesh out what happened. Ninety minutes is never enough time to grasp something as complex as history. Nielsson favors the dramatic arc of the gangster movie: in the end, Mangwana is squeezed out of the Mugabe administration, and nervously awaits an inevitable “accident.” Otherwise, nothing’s changed. Another new nation battles for its soul, and yet again, the devil wins.