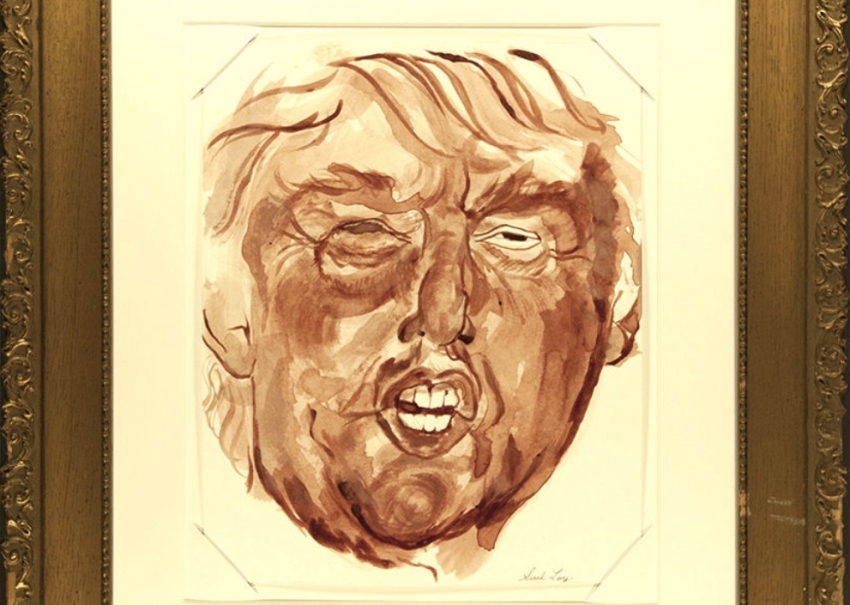 Proceeds from the painting will go to an immigrant and workers rights organization in Portland.

“Even though the piece itself was most directly a comment on Trump's misogyny, I thought that it would be fitting to have the proceeds go to an immigrants rights group seeing as his statements toward immigrants have been especially atrocious,” Levy says.

Donald Trump has a bit of an ego. Beyond the numerous buildings bearing his name in gigantic letters, the man is known to meticulously collect each and every magazine that features him on the cover. But there’s one likeness of him that he’s probably not clamoring to hang on his office wall.

One month ago, Portland-based artist Sarah Levy made headlines when she painted a portrait of Trump, mid-harangue, in her own menstrual blood as a response to Trump’s then-recent comment that Fox News anchor Megan Kelly had “blood coming out of her wherever” when she pressed him on his alleged sexism in the first GOP debate. Now, the painting, titled “Whatever,” is up for sale on eBay, with seven bidders so far fighting over the now reddish-brown likeness of the billionaire.

As of October 20, with less than three days to go in the auction, the painting has received 40 bids, reaching a price of $870. Levy plans to donate 100 percent of the proceeds to the VOZ Workers’ Rights Education Project in Portland, a worker-led organization that aims to help day laborers and immigrants by offering leadership development and classes to teach them skills essential for long-term employment.

“Even though the piece itself was most directly a comment on Trump's misogyny, I thought that it would be fitting to have the proceeds go to an immigrants rights group, seeing as his statements toward immigrants have been especially atrocious,” she says.

Levy hopes that the painting and the attention it’s garnered can serve as a good example of how art can highlight issues in the digital age, when a single image can become ubiquitous by going viral.

“I could have written something about how outrageous it was that the leading Republican candidate could say something so sexist and behind the times and not really suffer from it,” she says, “but that would have been a lot easier for people to ignore. I think in a way paintings have a power in that they can get people to take a second to look at them.

“I think that when something is labeled ‘art,’ it automatically garners a different audience than if it's just labeled under ‘politics,’ and so … there is potential to reach a more people with your ideas and not just end up speaking to the choir,” she added.

Levy, inspired by the work of artists Betty Dodson and Jamie McCartney, wants to continue painting with her menstrual blood as a statement on the stigmatization of women’s reproductive health.

Although she’s considering tackling Hillary Clinton next, she’s also accepting commissions through her website and Twitter account. With more than 18 candidates technically in the running, any potential patron is spoiled for choice when it comes to portraits right now. Perhaps a stern Mike Huckabee? Or maybe a feisty Jim Webb? Given his name's association with bodily fluids, maybe Rick Santorum would make for a good painting.