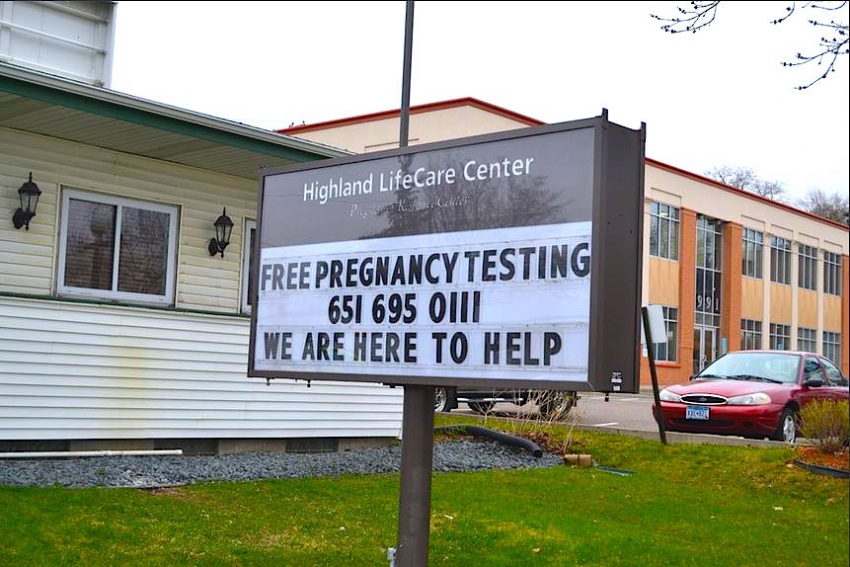 CPCs have been repeatedly charged with providing misleading or, in some cases completely false, information for pregnant women.

Crisis pregnancy center advocates usually deny that CPCs mislead women, arguing that those who come to visit are well aware of the clinics’ anti-abortion slant. But investigations by reproductive-rights groups and Congress have found that CPCs often set up shop in close proximity to real reproductive health facilities and hide their anti-abortion agenda when women call seeking information.

Earlier this month, California Governor Jerry Brown signed the nation’s first statewide law to regulate crisis pregnancy centers (CPCs). CPCs are facilities that work to counsel women out of having abortions, offering them resources like diapers, baby formula and maternity clothes, but also often disseminating misleading or outright false medical information. Boosted by government funding under George W. Bush, they have proliferated over the past 15 years, with an estimated 3,500 nationwide—outnumbering real abortion clinics 3-to-1.

California’s Reproductive Freedom, Accountability, Comprehensive Care and Transparency (FACT) Act, which overwhelmingly passed the state assembly in May, is being hailed as a landmark victory in a nationwide effort to push back against the rise of CPCs.

The new law, set to take effect January 1, will govern California’s nearly 170 CPCs, about 60 percent of which operate with no medical license. The law requires unlicensed facilities to post a notice—in “no less than 48-point type”—stating that they have neither a state medical license nor licensed medical staff. Licensed CPCs, for their part, will be required to inform women about available public assistance for contraception, abortion and prenatal care.

Whether or not the law can withstand a court challenge, however, remains to be seen. The decades-old movement to regulate CPCs has been repeatedly thwarted by First Amendment challenges.

Although CPCs began cropping up in the late 1960s as individual states lifted their bans on abortion, the clinics flew under the radar until the 1980s and 1990s, when they became a subject of a heated debate that went all the way to halls of Congress. Detractors argued that CPCs’ strategies to lure in women—such as offering free non-diagnostic ultrasounds and staffing their non-medical volunteers in white lab coats—amounted to false advertising. Defenders said their actions were protected speech.

The passage of the Personal Responsibility and Work Opportunity Reconciliation Act in 1996—or “welfare reform”—increased federal funding for abstinence education and helped to fuel the expansion of CPCs, as In These Times reported in 2002. The law enabled the Bush administration to funnel $60 million in federal abstinence-only funds to crisis pregnancy centers between 2001 and 2005, often doubling or tripling the centers’ annual budgets.

In response, a number of investigations into CPC practices were launched. A 2006 congressional investigation, initiated by Rep. Henry Waxman (D-Calif.), looked specifically at CPCs that received federal funding, and found that most provided women with false or misleading medical information, which “often grossly exaggerate[ed] the risks.” (Federal funding for CPCs continues today, despite the Obama administration’s efforts to end it.) NARAL, a national pro-choice organization, has also been investigating CPCs for more than a decade, and has discovered that staffers routinely overstated the risks of abortion or simply lied—telling women that ending a pregnancy would lead to infertility, breast cancer or even suicide. A 2008 NARAL investigation into 11 crisis pregnancy centers across the state of Maryland found that “every CPC visited provided misleading or, in some cases completely false, information.”

Drawing on the Waxman report and NARAL’s investigations, in 2009, Baltimore passed the first-ever legislation designed to curb CPCs’ misleading advertising practices. Challenging CPCs from a false advertising perspective was, in part, a strategic decision. As Slate’s Emily Bazelon reported in 2009, “There's a whole branch of law, commercial speech, to explain why false advertising gets less First Amendment protection.” The law required Baltimore CPCs to display signs—in both English and in Spanish—clarifying that they do not provide abortion or birth control referrals. Similar laws were soon passed in New York City, Austin, and San Francisco.

These ordinances were all challenged in court on First Amendment grounds. CPC backers argue that the regulations violate their religious freedom and their right to free speech. Baltimore’s law was struck down in 2011 and is still tied up in court appeals. Austin’s was overturned, as were key aspects of New York’s law. Given their free services and nonprofit statuses, judges have tended to see CPCs’ speech as “noncommercial”—a designation that generally receives greater constitutional protection than commercial speech. But San Francisco’s law, which passed in 2011, has thus far withstood legal challenge.

Pro-choice advocates in California treaded very carefully in drafting the FACT Act. “We paid a lot of attention to the bills crafted in other cities,” says Amy Everitt, the state director of NARAL Pro-Choice California. NARAL also enlisted the help of Attorney General Kamala Harris, a Democrat, to identify language that might be deemed unconstitutional.

Everitt explains that laws which require centers to post signs describing what they do not provide (such as abortion referrals) have tended to be more legally vulnerable than those that require facilities to distribute “neutral” information about available government services. So the FACT Act only requires licensed clinics to inform women of the many services available to pregnant women. In California, state Medicaid funds can cover the cost of an abortion, and millions of Californian women became eligible for Medicaid with the passage of the Affordable Care Act.

“In California, we have some of the best pro-choice policies in the whole country, but if women aren’t aware of what’s available to them, then they can’t use them,” says Everitt. “They need to find out about their options, and they need to find them out when they are actually out seeking care and information.”

Crisis pregnancy centers have already filed two suits against the Reproductive FACT Act. The law “is an outrageous and unconstitutional violation of both the right of free speech and the right of freedom of religion for our members in California,” said Thomas Glessner, the president of the National Institute of Family and Life Advocates, in an email quoted in Life News. “The Act unconstitutionally forces pro-life pregnancy centers, on pain of government penalty, to engage in government disclaimers that they would not otherwise provide.”

In response, Everitt notes that the state has a “public health interest” in ensuring that women can access high-quality reproductive care. “Women are seeking their options,” she says. “They are going online and they are looking for information to make their decisions about unintended pregnancy or pregnancy scares, and they were not getting the information they wanted in certain places like CPCs.”

Crisis pregnancy center advocates usually deny that CPCs mislead women, arguing that those who come to visit are well aware of the clinics’ anti-abortion slant. But investigations by reproductive-rights groups and Congress have found that CPCs often set up shop in close proximity to real reproductive health facilities and hide their anti-abortion agenda when women call seeking information. CPCs have also spent significant sums of money to advertise their services misleadingly in newspapers, on billboards, on social media and through Internet search engines.

While the fate of California’s new law remains uncertain, energized advocates are determined to build on their newfound political momentum. Everitt says she hopes their new law will serve as a model “for every state to pursue.”The new measures are “what it looks like to respect women,” adds Ilyse Hogue, the president of NARAL Pro-Choice America.“Empower us and trust us to make the best decisions for ourselves and our families.”

How Our Bloated Military Strengthens the Police State