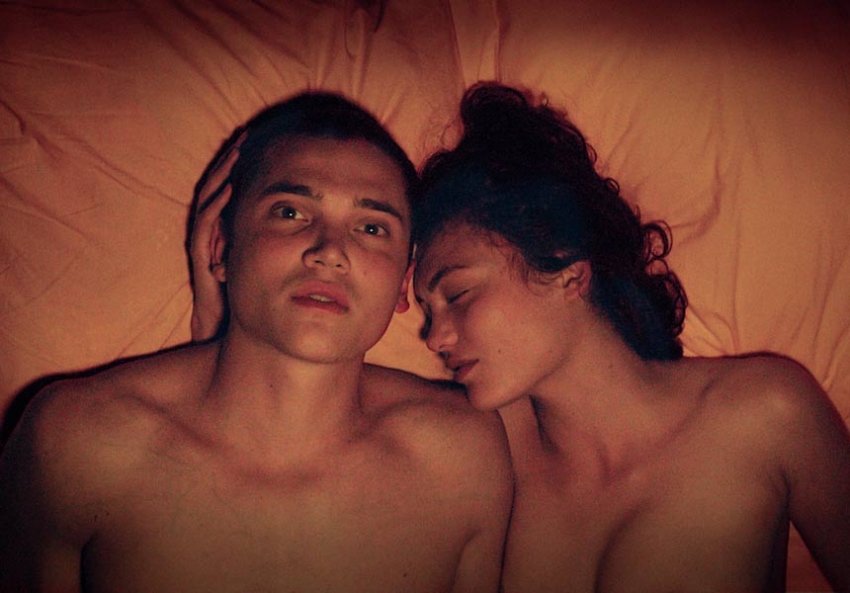 Karl Glusman as Murphy and Aomi Muyock as Electra in Love. (COURTESY OF ALCHEMY)

Love in the Time of 3D Boners

Do the genitalia in Gaspar Noé’s Love herald the rise or the fall of 3D cinema?

Like all of Noé’s films, once you strip away the flashy conceptual gimmickry, Love earns a real sadness.

Noé has made only four features in 17 years, but each has been a masterfully tuned provocation: He excels at showing us things no one else dares, in radically unpredictable ways. The harrowing I Stand Alone (1998) is a portrait of a violent sociopath told exclusively from his insular point of view, while Irreversible (2002) runs its set pieces backwards, from an appalling revenge killing to the brutal rape that instigated it, to the characters’ serene life before it all. Enter the Void (2009) is an epic out-of-body experience, following the consciousness of a dead drug dealer as it soars over Tokyo and visits the past. In each case, Noé’s daring and originality are as undeniable as his motives are questionable

Soon Omi is pregnant, and Murphy finds himself stuck with her and the baby while painfully mourning the lost (and dope-loving) Electra. Noé scrambles the time frame in the editing, and so this rather simple plotline only becomes gradually apparent. Meanwhile, there’s lots of real, passionate, simulation-free fucking, which doesn’t quite grind the narrative to a halt as you might think, but certainly slows it down to a viscous drip.

Now might be the time to admit I didn’t see Love in 3D—as I’ve written before, I’m among the roughly 10 percent of humans who cannot process 3D imagery. Which begs the question, as I watch the actresses’ creamy limbs and Glusman’s stiff penis thrust at the camera: What am I missing? Since 3D was obviously part of Noé’s conception, can I be said to have seen the film at all? Or is 3D just the gratuitous icing on the cake, the Auto-Tuned warp without which the music would actually be better?

I’m not the one to judge, obviously, but it seems all I missed was a cumshot in the eye. Anyway, hard sex in “normal” feature films is not revolutionary, and its upshot is typically misogynist. Starting with Nagisa Oshima’s scandalous In the Realm of the Senses (1976), the actresses in such films have next to no career possibilities thereafter, while the actors can and have thrived. We can take a man seriously after watching him fuck for a movie, but a woman who does the same is usually rendered culturally obsolete. Distracted and distanced from the characters by the sex itself, Love viewers can’t help but wonder about the cast’s future careers. I’d be surprised if Muyock and Kristen, both gorgeous and capable nonprofessionals Noé met in nightclubs, find any subsequent roles that allow them to keep their clothes on.

It’s easy, and probably wise, to be cynical about Love; Noé’s strategy is at least one part impish marketing to one part passion project. But like fellow nose-thumber Lars von Trier, Noé is serious about psychodrama, and the movie, with all of its loving bedplay and bellowing heartbreak, accrues a measure of pathos you don’t see coming. Murphy’s character is a big hurdle—he’s alternately a jealous thug and a pretentious ass, and you know both women could do better.

But all the same, when he huddles in the bathtub with his baby, both of them crying for different reasons, something inexplicably human happens. A running subplot, in which Electra’s mother calls the baby-bound Murphy looking for her daughter (who’s missing since their breakup), also builds pathos—is she even still alive? Like all of Noé’s films, once you strip away the flashy conceptual gimmickry, Love earns a real sadness. You just have to overlook the protruding genitalia to see it.