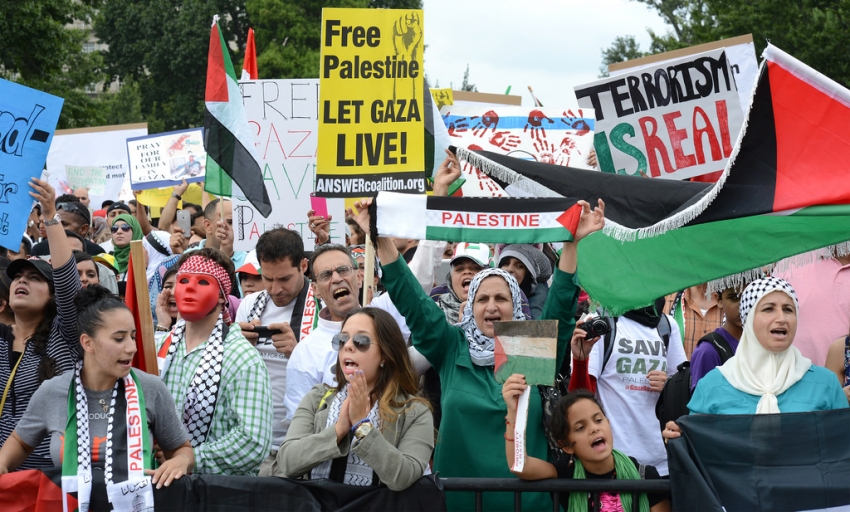 Protester gather in front of the White House in 2014 against Operation Protective Edge, Israel's most recent military assault on Gaza. Steven Salaita was fired shortly after his hiring at the University of Illinois over tweets critical of the assault. (Stephen D. Melkisethian / Flickr)

Civility and Its Discontents

In a world where “civility” is often merely a cover for the defense of oppression, only the uncivil can be on the right side of history.

A year has passed since Steven Salaita was fired from a tenured faculty position at University of Illinois at Urbana-Champaign just two weeks before his signed contract began. In that time, the chancellor of the school has resigned in disgrace (although she still holds her faculty position), Salaita’s lawsuit against the university for violating his contract has gone forward and the American University of Beirut has hired him to serve as the Edward W. Said Chair of American Studies.

While the real reasons behind Salaita’s firing are still being unearthed in the lawsuit, UIUC Chancellor Phyllis Wise offered the following as an explanation for why she did not forward his hiring to the Board of Trustees for pro forma approval: “As chancellor, it is my responsibility to ensure that all perspectives are welcome and that our discourse, regardless of subject matter or viewpoint, allows new concepts and differing points of view to be discussed in and outside the classroom in a scholarly, civil and productive manner.”

So what suddenly made Steven Salaita a threat to civility? Though a handful of his impassioned tweets criticizing Israel’s war on Gaza in summer of 2014 were selected as justification for his termination, they had little to do with it, as he writes in Uncivil Rites: Palestine and the Limits of Academic Freedom, a series of interdependent essays that Salaita wrote—mostly on the road while travelling around country giving talks—after his life as a professor was uprooted and he became a symbol of the precarity of academic freedom.

Salaita’s book, which braids his personal story with a theoretical framework for understanding the power that was exercised against him and the political context in which it took place, is largely concerned with the precarity of something else: the colonial mindset and the interests it protects as seen in the American university. “I submit that the hysteria the tweet generated was less about an ostensible incitement to violence and more about the profound anxieties of colonial self-esteem,” he writes.

Salaita suggests that the fundamental reasons for his firing extend beyond himself and his own niche of controversy—that is, Palestine solidarity, the condemnation of Israeli militarism and support of academic boycott of Israeli institutions. “It would be a great mistake to conceptualize my termination as having much to do with me beyond the unpredictability of chance,” he writes.” His own firing “is less important than the system” within which it occurred.

And the system is one that doesn’t end with Zionist or even donor pressure, he says, but reaches back to the founding sin of America: the colonization of the indigenous population and the subsequent creation of a ruling elite that requires obeisance from those it rules. When Phyllis Wise and the Board of Trustees demanded “civility” from him, Salaita argues, they were defending and enforcing that relationship. “In barring me, the trustees also banished a set of ideas it considers threatening,” Salaita writes.

Wise herself invited such a historical analysis, which as a scholar of American Indian studies Salaita is well qualified to provide, when she asserted with the bland obliviousness of institutional power: “Tenure… brings with it a heavy responsibility to continue the traditions of scholarship and civility upon which our university is built.”

Salaita uses the specifics of his own termination to explore the wider implications of the tyranny of the “civil,” or what he frequently refers to as “common sense.” Common sense, Salaita explains, is the logic employed by the ruling class to elicit consent from those they rule. Common sense, for example, would tell you that it is civil to kill thousands of innocent civilians, but not to unambiguously denounce such actions on Twitter.

The book is a collage of genres and writing styles. Salaita’s sardonic musings or anecdotes of personal and familial life might lead directly into an academic exposition of the machinations of colonialism, then wend its way back to a discussion of his legal case.

When writing about his family and personal life, Salaita’s prose is graceful and poignant. If at times some passages become a bit plodding, Salaita’s thoughtful and humane candor is never absent. Far from presenting his experience as exceptional—or even as an omen of academic freedom under some new threat—Salaita argues that his is but an example of countless others, some with names and recorded stories, but, most chillingly, many more without.

“Any cursory review of the history of American universities shows that academic freedom isn’t universally accessible. The suppression of Blackness and Indigeneity predates the purge of Palestine and in many ways contextualizes and sustains it,” he writes.

Salaita nurtures no nostalgia for a mythical past of academic freedom in America. The idea of such freedom, he writes, “can easily rationalize dispossession of rights,” making him “tepid” about relying too much on the concept. Yet while he declines to offer a lifeboat for the American academy to redeem and save itself, Salaita does place hope for its liberation in the hands and labor of its fugitives—student activists, dissident faculty members and all others who resist challenges to an immoral status quo. In a world where “civility” is often merely a cover for the defense of oppression, only the uncivil can be on the right side of history.

Charlotte Silver is an independent journalist with a focus on Israel and Palestine. She's written for The Nation, Vice, Al Jazeera English and many others. She is based in Oakland, California.