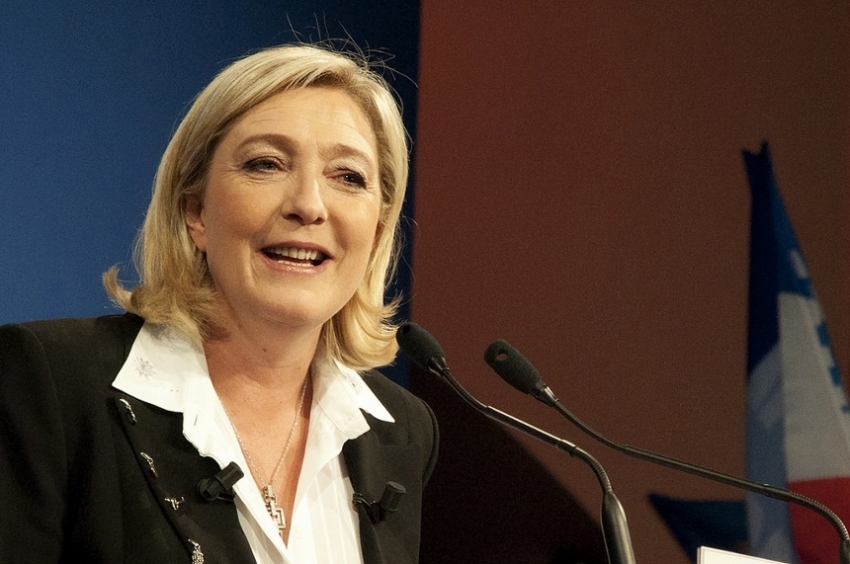 Donald Trump, Marine Le Pen, and the Dangers of ‘Eco-Nationalism’

France’s ascendant far-right claims to care about climate change. Activists in Paris explain why that’s a problem–for France and the rest of us.

Le Pen’s “eco-nationalism,” and similarly “eco-friendly” right-wings in Hungary and Denmark, might be a preview of how the environmentalism of the U.S. Right will evolve as denialism becomes less viable in the coming months and years.

In front of a raucous crowd in South Carolina on Monday night, White House hopeful Donald Trump called for a “total and complete shutdown of Muslims entering the United States.” Across the pond, the woman who has already one-upped Trump’s bigotry just had the best night of her career. The Front National—France’s previously fringe ultra-right party—swept six of the country’s 13 electoral regions in first-round elections on Sunday. “My aim is clear,” proclaimed party leader Marine Le Pen: “Stop immigration, both legal and illegal.”

Pundits in the United States have rightly drawn comparisons between Le Pen’s xenophobic, anti-immigrant rhetoric and Trump’s, noting their shared Islamophobia and surging poll numbers. Less discussed have been their respective stances on climate change, despite the 21st Conference of Parties that has been taking place in Paris over the last two weeks. Le Pen’s overall approach on climate is far more sophisticated than Trump’s, and if the ascendancy of far-right xenophobes around the world—including in the United States—is accompanied by the spread of her brand of eco-nationalism, so-called solutions to the climate crisis could spell dystopia for society’s worst-off.

Trump denies climate change, like the rest of the Republican Party. When the temperature dropped in October, he quipped, “Man, we could use a big fat dose of global warming!”

But as Trump and the rest of the GOP beat the drums of denialism, the French Right operates in a different political context. In France, denying climate change is seen as out of touch with political and scientific reality. Le Pen laments the 50 percent rise of greenhouse gasses since the Kyoto Protocol’s 1997 signing. The Front National even have their own climate initiative: “New Ecology,” which seeks to distance environmentalism from the left’s “utopian solutions” and “understand ecology pragmatically.” “Family, nature and race” are at the core, alongside militant border protections and the rejection of both free trade agreements and the UN Framework Convention on Climate Change responsible for the Paris talks, which they call “a communist project.”

Some items in the “New Ecology” platform might surprise a U.S. audience not used to hearing conservatives talk climate. A “decarbonization of the economy” is mentioned, as well as ecological patriotism, respect for wildlife and “energy transition by monetary independence.”

French climate organizers can attest that a political landscape free of climate deniers is not one full of allies. In a debate last December, Le Pen accused French Green Party National Secretary Emmanuelle Cosse of “promoting a profoundly anti-ecological model through the European Union and through the absence of borders.” While New Ecology’s dog whistle is shinier than Le Pen’s, FN environmentalists still see the question of anthropogenic warming as “a very technical question.” Though not deniers, some members may well be climate skeptics, and are certainly less serious about actually addressing global warming than their messaging might lead you to believe. “There are pros and cons to the scientific evidence,” a member of the FN's environment committee told The Guardian last year. “We have to find out what really comes from human activity, or doesn’t.” According to one activist here in Paris, “I’m not interested at all about what they think about the environment. I know that they have those platforms—but it’s the Front National!”

New Ecology is just one part of the FN that forms a coherent and reactionary whole: decarbonization with a side of ramped-up border security and “fascist lite” authoritarianism, as some are calling the recently madeover Front National.

Le Pen’s “eco-nationalism,” and similarly “eco-friendly” right-wings in Hungary and Denmark, might be a preview of how the environmentalism of the U.S. Right will evolve as denialism becomes less viable in the coming months and years.

Beyond racism, anti-establishmentarianism, patriotism and nostalgia, perhaps the strongest defining quality of far-right populists is flexibility. Insurgent politics are often better at adapting to evolving political circumstances than the entrenched parties that stick to their dog-eared political scripts.

The FN’s rise was due in large part to Le Pen’s ability to take political correctness seriously. As historian Hugh McDonnell has detailed for Jacobin, she set out several years ago to modernize the Front by purging jackbooted thugs and Nazi sympathizers—including her father Jean-Marie Le Pen, who headed the party for nearly 40 years. Certain kinds of racism and anti-Semitism (like calling the Holocaust “a detail” of history, as Jean-Marie has repeatedly) had become a stumbling block for the FN in winning over local government seats and more centrist conservatives. Her “de-demonizing” of the Front paid off at the polls, with 11 newly FN-controlled municipalities and a first-place finish in 2014’s European Parliamentary Elections. The drive also sewed resentment among long-time FN apparatchiks. A former secretary general McDonnell quotes once groaned, “[Jean-Marie] was capable of defending his ideas even if they weren’t popular. His daughter defends what is popular whatever the ideas.”

“Marie Le Pen was trying to mainstream her political party,” says Juliette Rousseau, coordinator and spokeswoman for the 130-plus-member Coalition Climate 21, a French-anchored bloc of civil society groups, social movement representatives and networks that’s been leading up many of the outside organizing efforts around COP21.. “At some moment, it became evident for everyone that they had to somehow talk about the environment if they wanted to look responsible.”

Cas Mudde, author of Populist Radical Right Parties in Europe and other works on the subject, defines populism as a “thin-centered ideology,” an idea originally coined by political theorist Michael Freeden. Populism, says Mudde, “argues that politics should be an expression of the volonté general (general will) of the people.” As belief in denialism loses ground in the US, Trump’s willingness to buck political convention could see him turn a corner on climate faster than his running mates. And that has consequences even if Trump doesn’t become the nominee: Adopting the platforms that have riled Trump’s masses would be a logical, if terrifying, step for a GOP now in crisis.

A Huffington Post/YouGov poll conducted just before COP21 showed that 57 support of Americans support a U.S. pledge to cut emissions by 2050. During this week’s climate talks, a spread of unlikely actors have gotten, behind some kind of climate action, however vaguely defined. Bill Gates, Richard Branson and Mark Zuckerberg all pledged their fortunes to support research into renewable energy, and multinationals like Coca-Cola, Apple and Pfizer have also used COP21 to jump on the climate bandwagon.

Whether or not the U.S. Right undergoes a climate change conversion, however, COP21 has made clear that the next fight on climate change will be about how—not whether—to slow it, and who will bear the costs. An Oxfam study released last week found that the richest 10 percent of the world’s population produces 50 percent of its emissions; those already feeling the brunt of climate impacts tend to be poorer, browner and more precarious. What will either a corporate-led or xenophobic environmentalism do for them?

At the talks, governments like the United States have moved past questioning whether or not global warming exists to making their best effort to wiggle out of their “differentiated [financial] responsibilities,” as the Paris Accords’ draft-text states, for warming as historical emitters. It was only at the urging of Global South delegates and grassroots forces that they finally agreed to a 1.5 degree cap on rising temperatures. The chances of a legally binding agreement remain slim. Most likely, this means it will be up to movements in delegates’ home countries to ensure that governments stick to whatever’s agreed to next weekend—and do much, much more.

I spoke with Rousseau in a basement corner of the Climate Action Zone (“ZAC”) north of Paris, as green-vested volunteers took overdue naps in chairs around us. The artists’ residence has become the base of operations for the climate actions taking place in Paris in defiance of a government ban on protests and “outside events.” French police have conducted 2,000 raids since the State of Emergency began after the November 13 attacks, and 24 climate activists were placed under house arrest. Yet protests inside and outside of COP, particularly those calling for a 1.5-degree target, have persisted, and played a central role in pushing COP negotiators to adopt more aggressive policies. Organizers promise that more protests will follow, despite the crackdowns.

“We have a socialist government at the moment, which is restraining our freedom to demonstrate and to speak freely,” Rousseau says. “So I can only assume that the FN will do worse.”

Given the spectacle of Trump's supporters pummeling a  #BlackLivesMatter protester for interrupting his speech, American organizers might well harbor similar concerns.

The movement beyond climate

When it comes to regressive environmental policies like the National Front’s, it could also be protesters’ job to ensure that progress on the climate doesn’t mean tighter borders, violent targeting of refugees already within them, and a generally more hostile and dangerous environment for people of color.

Over the next 35 years, the UN estimates that climate change could create anywhere between 200 million and 1 billion climate refugees, adding to the many already being displaced by war and associated political instability. A progressive response, contra Le Pen and French President Francois Hollande’s own reinstatement of strict border controls, would be an opening of borders and expansion of real economic opportunities to ensure that “solutions” to climate crisis aren’t simply sustainable enclaves for the rich and white with militarized borders.

“I’m not interested in a world that is still unequal, where some parts of the environment are protected, and inequality is based on the color of your skin, your class, the place where you live,” says Rousseau“We’re not [only] defending Planet Earth. What’s behind the climate question is the question of what kind of society can we hope to live in in the future.”

Despite the FN’s victory, Rousseau, for her part, sees a way forward. “Where people are mistaken is that I don’t believe that we can fight that kind of ideology in a single election. I think you fight it on a daily basis. You fight it not accepting that people are being—every day—profiled by police because of their skin color. You don’t accept that you have so many migrants sleeping on the streets with their children,” she tells me, before rushing off to another meeting. “That makes me convinced that what we do here is absolutely essential.”