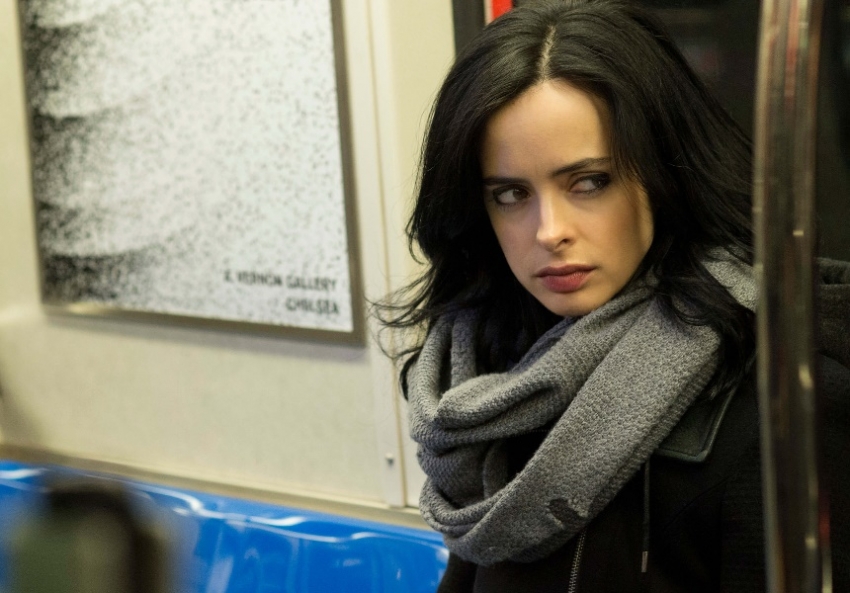 How Jessica Jones Won Over This Marvel Hater

It digs down hard into all that slow, talky psychological realism and moral ambiguity that Marvel thrives on ignoring, and it never abandons it, even when the characters are literally punching each other through walls and flying across the room.

I am proud to call myself a relentless and inflexible critic of the Marvel Cinematic Universe. For some time now, the unstoppable torrent of Marvel content—at least 23 movies between 2008 and 2019, plus at least seven TV shows (Agent Carter and Agents of S.H.I.E.L.D. on traditional broadcast, plus four separate Netflix shows for Iron Fist, Jessica Jones, Luke Cage and Daredevil, plus The Defenders, their inevitable team-up)—has been catastrophic not only for genre movies, but for entertainment as a whole.

Consider the effect Marvel has already had. Everything has to be a blockbuster, just to compete. Every blockbuster has to take place in “a universe” (which is to say, an endlessly prolonged and over-elaborated franchise) to command the largest possible share of consumer loyalty and income. Most of it, apparently, has to belong to Disney, one of the larger and more overtly evil media corporations in the world, which has now purchased Star Wars, Marvel, and (experts estimate) approximately 34 percent of your personal sense of childhood wonder.

It’s not just that we can’t get away from Marvel, or Disney: It’s that there are still genuinely great, beautiful, stand-alone sci-fi and horror and fantasy and action films being made, and Marvel is hurting their chances. This year, for example, we had Crimson Peak, Ex Machina and Mad Max: Fury Road. All of them were unique, thought-provoking, and progressive, particularly in their treatment of gender. And the first two struggled at the box office. Meanwhile, the relentlessly dull, surprisingly sexist, and borderline-nonsensical Marvel punchfest Age of Ultron made over $495 million (far outdoing Mad Max’s $300 million) despite the fact that I didn’t know a single person who walked out of the theater fully satisfied with the film.

So, yes: The Marvel Cinematic Universe is having the same effect on good genre fiction that Starbucks had on independent coffee shops. Not only are they brewing a worse product than the competition, they’re making it harder for anyone else to make a living by serving a decent cup. I have deep aesthetic and, dare I say, political objections to the entire enterprise. It would take a miracle, or a masterpiece, for me to ever unequivocally praise one of their products.

And Jessica Jones is either a miracle or a masterpiece, because I’ll be damned if it’s not a pretty good TV show.

Plenty has already been written about Jessica Jones as a feminist triumph. At Feministing, Jos Truitt calls its rape-and-abuse centered plotlines “one of the most powerfully accurate depictions of PTSD I’ve ever seen,” and praises it for “demonstrating how TV can be used to address sexual and relationship violence, trauma, and PTSD in real ways that treat survivors with respect and give no purchase to abusers.” Lisa Weidenfeld at the AV Club notes the shameless hotness of its sex scenes, saying that “Jessica Jones is a deeply feminist show, all the way down to its depiction of sex, which is pointedly empowering for the women.” At AfterEllen, you can find praise for its depiction of lesbian characters and relationships; it’s “smart and sexy and dark and creepy; it’s queer-inclusive and focused on women who refuse to be victimized.” And, of course, the showrunner is a woman—Melissa Rosenberg, long may she reign—which is nice to hear, in part because it is still infuriatingly rare.

Well. Far be it from me to piss on any parades. But a lot of the feminist innovations in Jessica Jones are not so much new as they are new for Marvel. The premise of Jessica Jones—a sarcastic female private investigator, living as a social outcast, and coping with the trauma of her own rape—is ripped word-for-word from Veronica Mars. Her power—super-strength, to underscore the fact that she is emotionally “strong”—is something we’ve already seen on Buffy the Vampire Slayer. So is the fact that Jessica’s biggest challenge is tracking down an evil ex-boyfriend  whose powers are a metaphor for domestic violence, emotional abuse and misogyny (David Tennant, as the misogynist mind-controller Kilgrave, is so magnetically watchable that you almost forgive him for being a blatant amalgam of Angelus and Spike). And while it’s refreshing that most of the major plotlines focus on women, that there are graphic sex scenes focused on female pleasure, and that (in the words of one massively viral Tweet) “the men are either bad or eye canohh,” all three of those things are even more true of Netflix’s own Orange Is The New Black—and OITNB features more women, focuses on them more exclusively, and depicts more queer characters and relationships. OITNB also centers the action largely on women of color and features a major role for a transgender woman, which Jessica Jones, to date, does not.

So, no: Jessica Jones is not a watershed moment. It’s not even Marvel’s first dip into the feminist-hero waters; that would be Agent Carter, which aired last January. And, if viewed through a sufficiently jaundiced lens, Jessica Jones could even feel like proof of how excruciatingly slow feminist progress has been: Things that Buffy did 15 years ago, that Veronica Mars did 10 years ago, and that Orange is the New Black did three years ago, are still considered radical enough that feminists are grateful for them today. We shouldn’t have to be grateful. We should be able to look at Jessica Jones and accept it as the norm for 2015.

But it’s not. And it’s good. So there seems to be no use in complaining. Jessica Jones may not be innovative in and of itself—in fact, it only seems to be mainstreaming, and sometimes toning down, innovations from earlier feminist media—but it’s better than nothing, and it’s remarkably graceful and stylish in how it accomplishes that task. So what I really appreciate, about Jessica Jones, is not the big, loud feminist moments, but the incremental improvements: The fact that, along with being a feminist parable, it apparently feels obligated to function as good TV.

Even if you don't have any problems with Marvel's business strategy, its storytelling has been a problem for a while. Each movie tends to have a roughly identical plotline and a disposable villain. All of them have structures that are weighed down and rendered borderline-nonsensicalby cross-overs and tie-ins (a problem that plagued Age of Ultron so thoroughly that Thor had to basically wander out of the plot for half the movie so that he could set up a sequel). And they all have a commitment to being “kid-friendly,” so as to maximize profit, which means that they typically operate with a child's black-and-white moral compass, criminal lack of subtlety, and preference for loud, shiny action over slow, talky scenes that establish character or psychological depth.

For all that I found Agent Carter ham-handed in its gender politics, I have to admit that the moment I really tuned out was during the pilot, when an angry, hard-drinking, womanizing billionaire (Howard Stark, of course) said “darn it” instead of “damn it” at the end of a tirade. The refusal to let him actually utter a mild curse word, like a real person of his age and station undoubtedly would, insulted me more than any blatant sexism: I was suddenly, painfully aware that I was watching a television show that expected me to think and react like a very small child or a very stupid adult. The show’s stated purpose of “empowering” me as a woman seemed to be in direct contradiction with its strategy of literally infantilizing me as a viewer. Marvel doesn't infantilize men any less thoroughly, of course – if anything, they're the ones who are most heavily targeted by all this – but I still felt condescended to, which is never a good look for feminist art.

This is a sin that Jessica Jones never commits. It digs down hard into all that slow, talky psychological realism and moral ambiguity that Marvel thrives on ignoring, and it never abandons it, even when the characters are literally punching each other through walls and flying across the room. The characters continually think and behave like real adults, living in real and terrible situations. Though Jessica has Veronica Mars’s job and Buffy’s superpowers, her psychology is more clearly and realistically delineated than either: As played by Krysten Ritter, Jessica is not ennobled or martyred or quirkily toughened-up by her years in an abusive relationship with Kilgrave, she is actually broken. There are deep cracks in her psyche, fault lines that reveal themselves through compulsive self-isolation, heavy drinking, rage outbursts, and sexual relationships that function as forms of elaborate self-punishment. (While under Kilgrave’s control, Jessica killed Luke Cage’s wife; now, she’s dating Luke, seemingly just so that he can learn what she’s done and hate her for it.) All of these are actual, common symptoms of sexual and relationship trauma, and they’re usually airbrushed out of media depictions.

Similarly, Jeri Hogarth (Carrie-Anne Moss! My, I’ve missed her) may bear the burden of being the first lesbian character in the MCU, but that doesn’t require her to be any less complicated or more adorable than anyone else; as June Thomas notes, she shares all the faults of a similarly powerful man (or of the male character she originally was in the comics), including neglecting her wife, having torrid affairs with girls half her age, and being so single-mindedly focused on winning her cases and maintaining her wealth that she’s willing to do shockingly amoral things. She’s not evil, but she is also not required to be unrealistically, glowingly perfect just to make a point.

This is what actual feminist media looks like: Not just plotlines in which abusers are villains and feminists are heroes (it’s true, but it’s also such an obvious point that one shudders to think we still have to make it) but the depiction of realistic, complicated, interesting women living in a real-ish world. It’s telling stories about women, without running them through a lens of male fantasies or fears. And it’s still so rare that we have to praise it wherever we find it, even when we find it in the one place we least want to praise.

Don’t get me wrong: I still think you’re more likely to find real, complicated, innovative feminist storytelling in the sorts of independent, stand-alone movies and TV series that Marvel is currently crowding off the market. And I still think we’re obligated to support, and even privilege, non-Marvel feminist and genre storytelling, in part so that Marvel will have good stuff to steal. But if even the most powerful and noxious genre-fiction media conglomerate in the world has finally absorbed the lesson that stories about real, interesting women make for good, interesting television, well, it seems churlish to object. This is still Starbucks, but for once, I don’t feel entirely guilty about stopping in for a cup every once in a while.