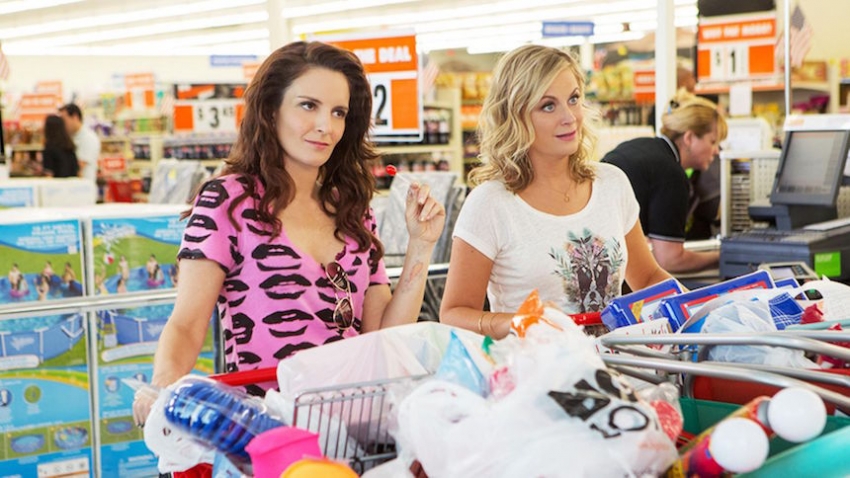 In Sisters, Tina Fey and Amy Poehler aren't action heroines, sure, but they do depict the awesome power of female friendship.

Without Explosives or Lightsabers, ‘Sisters’ is a Quiet-er but No Less Feminist Film

In co-opting the party narrative for a feminist audience, Sisters does for comedies what the new Star Wars has done for action movies.

Sisters is not a mind-blower or a life-changer. It will never have a toy line or a video game. But it is a different kind of feminist moviegoing experience: A movie that genuinely likes women, and encourages women to like each other, and wants them to have a few hours of entirely disposable, low-stakes fun.

First things first: There is nothing particularly revolutionary about Sisters.

The comedy—directed by Pitch Perfect's Jason Moore from a script by Saturday Night Live and 30 Rock writer Paula Pell, and starring the much-beloved duo of Tina Fey and Amy Poehler—is not going to change any lives or blow any minds. It's a ramshackle party comedy, with only the barest ghost of a plot: Two adult sisters, one terminally uptight, one tragically irresponsible, return home to find that their parents have sold the house where they grew up. Left alone in the house for the weekend, they decide to throw one last rager with all their high school friends, to honor their youth before it disappears forever. Things go wrong, entertainingly, and with lots of guest stars. That's about it.

If you know your party comedies, then you already know that, over the course of the night, substances will be abused, hotties will be banged, property will be damaged and life lessons will be learned; moreover, because of the type of movie this is, all of the characters will say which lessons they've learned, loudly, and in very simple language (“being your mother… it's the one job I'll never quit!”) in case the audience is too simpleminded to have grasped them through inference.

Every major plot twist can be seen coming from miles away; when Poehler refuses to flirt with a guy that she believes to be out of her league, we instinctively know she will end the movie wrapped in his manly yet unthreatening embrace. When the girls' parents warn them not to mess up the house while staying there (“if you need to poop, go to the Arby's”), we immediately understand that the total destruction of said house is imminent, and wait only to learn the how and why.

But here's the thing: I'm not complaining. I haven't necessarily described a bad movie here; what I've described is, essentially, Superbad, but without Superbad's alarming pro-date-rape subtext and with two adult women in the lead roles. “Superbad, but not for gross dudes” is a perfectly appealing concept. And it becomes vastly more appealing when the two women at the center of the action are Fey and Poehler.

In fact, there's something charming about how intentionally small and low-stakes Sisters is. Let us not forget: This movie opened against the cultural juggernaut that is Star Wars: The Force Awakens. And while Force may actually be the more overtly feminist and progressive movie—Rey (Daisy Ridley), a light-saber-wielding tough girl, is the film's main character; furthermore, nearly every protagonist who isn't Rey and/or an original cast member is played by an actor of color—it's also a grandchild of the original movie-as-toy-commercial and a product of a cultural moment in which nearly every big movie is built by reviving a recognized “brand” (Star Wars, Star Trek, Marvel Comics, Harry Potter, Ghostbusters; for God's sake, they brought back Teenage Mutant Ninja Turtles not that long ago) and building it into a cross-platform edifice so huge that fans can crawl inside of it and live there for years, paying constantly for the pleasure.

2015 was an admittedly big year for feminism at the movies. Not long ago, the concept of a female-led Star Wars—or even a female-led sci-fi action blockbuster—would have seemed like a pipe dream. The idea of a female-led action movie grossing over $1 billion in a week—well, that would have been crazy talk. But this year, aside from the unavoidable Star Wars, there have been plenty of female-led movies and TV shows that focus on things crashing and banging and blowing up. They often tack on admirable morals about women surviving rape and abuse; they often star a particular kind of violence-prone, damaged, jaw-clenchedly resolute survivor (think Imperator Furiosa from Mad Max: Fury Road, or Jessica Jones; hell, even Rey is a little more disillusioned and hard-bitten than her obvious analogue Luke Skywalker) that is still the easiest way for many people to imagine a “strong woman.”

This is great. Honestly, it is. It's so rare that I will probably need at least 10 more years of massively profitable female-led action giants before I start to roll my eyes. But—speaking as a fan of things crashing and banging and blowing up—there is more to life than explosions. And women do, in fact, do things outside of “survive unspeakable rape and abuse,” “avenge unspeakable rape and abuse” and “wield lightsabers.”

Sisters will never have a toy line or a video game. But it is a different kind of feminist moviegoing experience: A movie that genuinely likes women, and encourages women to like each other, and wants them to have a few hours of entirely disposable, low-stakes fun. I saw Force Awakens and Sisters in the same week. Both theaters were packed. But, in the case of Sisters, it was almost entirely packed with large groups of women. Female friends, going to see a movie that starred two close female friends, and which celebrated the bonds of female friendship: It's easy to forget this, but before 2011's Bridesmaids, that was pretty rare, too. And, several years of Melissa McCarthy buddy comedies later, it still feels powerful.

So, settling into the easy comedy beats of Sisters, you learn to appreciate the little things. First, and maybe most fun: If this is Superbad, then Tina Fey gets to play the Jonah Hill role. Finally escaping from under the long shadow of Liz Lemon, Fey plays one of the more un-Fey-like characters I can remember: A single mom with a drinking problem, a fondness for revealing leopard-print dresses, and the propensity to lose her shit at the slightest provocation. She obviously enjoys the freedom – half the fun of the movie is watching her have fun – but movie also allowed me to see that there's always been a genuine, deep sadness and vulnerability in her characters, which typically gets buried under her type-A whiz kid persona. Poehler plays more to type (her character is basically “Leslie Knope, but a nurse this time”) but Poehler playing to type somehow never gets less enjoyable with time.

Then, too, you get the sense that the party-movie conceit is largely an excuse to throw together an actual party, and get a bunch of comedians in the room with each other. Not all of them are used well – the brilliant Kate McKinnon, as a butch lesbian friend, is given a role that's both unpleasantly stereotypical and (what is arguably worse) barely given any screen time; ditto for Greta Lee, who does great, deadpan work here, but who's saddled with selling the sort of “Americans can't pronounce Asian names” jokes that I would gladly see banned from all entertainment – but it is fun to see who shows up, and what they get to do. (Maya Rudolph as the high-school nemesis! Bobby Moynihan as the class clown nobody laughs at! Rachel Dratch as… Rachel Dratch, essentially!)

And when the jokes work, they work at the quietly, viciously feminist level Fey and Poehler are famous for. You can write a thousand op-eds about the double standard for male and female aging. But when one character evaluates their friends' aging process with a line like “at least the women are making an effort, but the men look like they're being slowly poisoned,” the point gets made, effortlessly, quickly and so well that you may not even recognize it until you're finished laughing.

It's a hard world out there. Questions of gender are more vexed than ever; horrific violence seems to erupt every few minutes; everyone, everywhere, is faced with the creeping realization that, at this time next year, we may well be living under President Trump. And big, showy, well-branded entertainments about women grimly avenging their own rapes are certainly one kind of cinematic feminism. But the feminism of just relaxing for an hour or two, and vicariously hanging out with two extremely likable women who like each other, is no less important. In a dark time, it may even be that this is the sort of feminism we need to keep it together for the long haul.