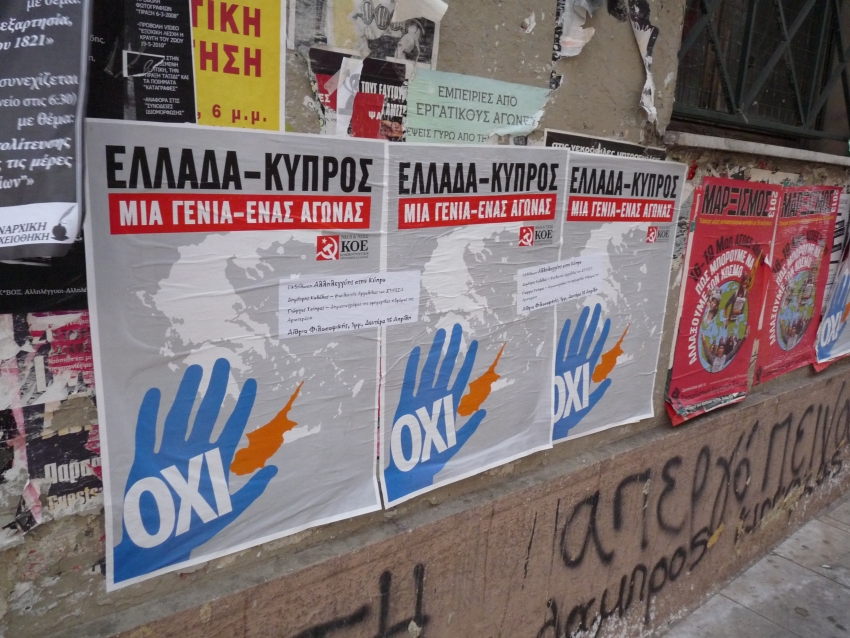 The Lessons of Syriza’s Failed Push Against Austerity

Austerity policies haven’t worked in Greece, but neither have the radical Left’s efforts to push back against them.

The reported aim [of austerity] was it would deal with the manifold crisis revealed by 2008, get back to a course of growth. It has not done that.

In January 2015, the political establishments of Greece and all of Europe were shaken up—and more than a little terrified—when the radical leftist, anti-austerity party Syriza was elected to power in Greece with just shy of a parliamentary majority. Syriza swept to power on the back of unprecedented disgruntlement with the harsh austerity measures Greeks had been forced to endure as penance for their supposed fiscal sins by the ”Troika,” the European Union, International Monetary Fund and the European Central Bank, upon which the Greek government depended on for bailout money. This disgruntlement helped to fuel massive protests across Greece that saw immigrants and young people link arms with radical leftists and working-class Greeks on the streets.

In November 2015, In These Times spoke with activist and author Kevin Ovenden, who has followed Greek politics for over two decades and has recently released a book, Syriza: Inside the Labyrinth, covering the subject, to ask him what has changed nearly a year on from Syriza's election.

The book is a warning to the Left. It says, if the Left fails, the fascist Right is there waiting to take over. Are we on the cusp of seeing a repeat of what happened in the 1930s?

Things don’t repeat themselves exactly. This is the worst crisis since the 1930s, and it’s endured now as long as the crisis from 1929-1934, which marked a recovery in the system. We’re not seeing a recovery. There is a polarization politically across Europe, before the large refugee and new migrant flows arrived from Syria and also Afghanistan, which pose the question of race, of immigration and the capacity of the far Right to provide an answer in Europe on a very large scale.

One of the unique things about the situation in Greece is the unity across class lines. Generally, the youth lead protests. But in Greece, there’s very much a sense of intergenerational and class solidarity, where people are on the same side. Why was that the case in Greece?

Some of it has to do with the recent history of Greece. Put bluntly, Greece emerged from the 1970s with a social compact which was designed to contain the great eruption which came with the fall of the dictatorship in 1974. Part of that has meant, for two or three decades, some institutional power of the trade union movement inside of Greek society. What you had was quite strong workplace power and union power in industries, but without much of a welfare state.

The trade unions and workers organizations were preserved to a greater degree in Greece than in most of Europe at the beginning of the 2000s. But then so was the Left. It was a big Left, a variegated Left—that’s one of the things people need to understand about Syriza.

There’s three things really: the persistence of the worker’s movement, which has meant battles; the persistence of the Left, which has had to organize itself; and then also some key moments where the Left, or part of it, ran in a radical direction. Those are the key reasons why in Greece for example the expression of the radicalization from 2008 to 2011 was expressed with a red flag. Whereas in the Spanish state, it was expressed with a very sophisticated idea which came from people on the Left, but disavowed there was anything left-wing about it.

What is the explanation behind this stubborn insistence on these policies that seemingly even people in the European establishment recognize are not really going to help?

We have to separate out two things. One is, what do we mean when we say, “Austerity hasn’t worked?” It hasn’t worked in terms of its reported aim. The reported aim was it would deal with the manifold crisis revealed by 2008, get back to a course of growth. It has not done that.

The second reason for their insistence on these policies is revealed by the refugee crisis. The German economy requires 400,000 skilled workers every year for the next 10 years to grow according to the model that it has. But that also requires infrastructure building, schools and so on—long term investment that was made in all of the advanced capitalist countries in the 1950s and 1960s.

The shift from austerity is not, “Should we allow movement from balanced budgets?” It’s, “Are we going to reorganize upon a model that makes long-term social investment?” And there’s nobody prepared to do that. It took the Great Depression and the onset of the Second World War and Franklin Delano Roosevelt in the center of the world economy to change the dogma of the economics and politics of the Wall Street crashes. And so far, there’s nobody willing to do that.

One of the seemingly unassailable myths about the Greek crisis is that it was caused by profligate government spending. You argue that wasn’t the case at all. Why is that a myth, and why does it persist?

This myth is perpetuated particularly in Greece, but it’s the case all over Europe. And it persists because the deficits did increase enormously from 2008 to 2010 throughout the whole of the advanced capitalist world, including in Greece, because the states took on the debts of the private sector—the banking debt. What was initially a banking crisis became a financial crisis. Then it was the massive state intervention, which left the profits intact but took on the liabilities, and then turned into a crisis of the state budgets.

One reason why it continues to be a myth throughout Europe is because government—or successful governments, in the case of Britain—none of them want to admit that what they did was a rescue of a capitalist system in crisis. That they socialized capitalist debts. They don’t want to admit that, so we all accept that we have this big problem of a budget deficit. So there’s a material basis why people feel that the crisis was caused by government budget deficit.

What would you say were Syriza’s biggest mistakes?

The biggest mistake was to imagine that they could win by force of argument—that they had a good rational case. That is Yanis Varoufakis’ point. He gave them a presentation which was irrefutable. [Other Syriza leaders] refuted it. They ignored it.

It wasn’t sufficient in terms of confronting domestic Greek capitalist interests, nor European. What I tried to do in the book is really clearly spell out in layman’s terms how I think of the two poles of the Left, the two strategies. I really lived through this, and tried to live through it with an open mind. Syriza always said it was for a parliamentary strategy—so it would be quite easy for somebody like me who feels like that’s going to be strategically a failure to say, “It’s going to be a failure,” and trot out all the reasons why.

That’s more interesting and more important. It’s to say, “Can we go through a well-trodden path [of taking state power] in a new way, which is more radical than the old social democratic parties?” What I tried to show was that it ran up against the same problems. There were resources short of workers’ revolution which would’ve given them a much stronger negotiating position.

But in order to take those choices, you had to be not committed to the strategy they were committed to. When you find yourself with the 61 percent ”No” votes in the referendum, this was them hitting a brick wall and turning to popular support. That was big. It shook the whole order in Europe. In a sense, the only way to make good use of the ”No” vote was to abandon the gradualism they’d been committed to. Not wholly—not say “We’ll try to set up workers’ councils” or something—but you had to move on to a much more confrontational footing. The problem is that they weren’t prepared to do that.

The space for there being a government which can be aggressively reforming with a bit of popular mobilization has quite tightened in Europe at the moment. There’s a polarization to the Left and the Right, the old order doesn’t want to give anything—it doesn’t have a model to look to, so it’s fearful about breaking from this one. So if you start to say, “Well, we just want to break out of austerity a little bit,” you have to be much more radical.

Your book shows the gradual co-option of a radical Left government that then starts to break promises, that starts to use the exact same language as Margaret Thatcher—“There is no alternative.” Syriza won the September election, and it’s selling off state assets and concluded a bailout deal. What’s the next step for the Left in Greece? What do you think needs to happen?

One important thing is understanding why Syriza failed. I don’t think it’s gone from radical left Syriza to Thatcherite Syriza. There is a movement of its policy, but essentially it’s still saying the same thing as it was back in June, which is, “We want to create some change. We can’t do it, so we’ll try and manage things in a more humane way than the others had.”

If you look back at the last six years, you see that this is a weak government. It’s now got a 149 seats out of 300, so it’s weak in a parliamentary sense. Faced with a general strike across the public sector, it had to say, “We support the strike because we think it will strengthen our negotiating position.” Now this can try to keep your activists together for one day. It’s not going to recover your base, and it’s not going to put you in a position for the confrontations to come.