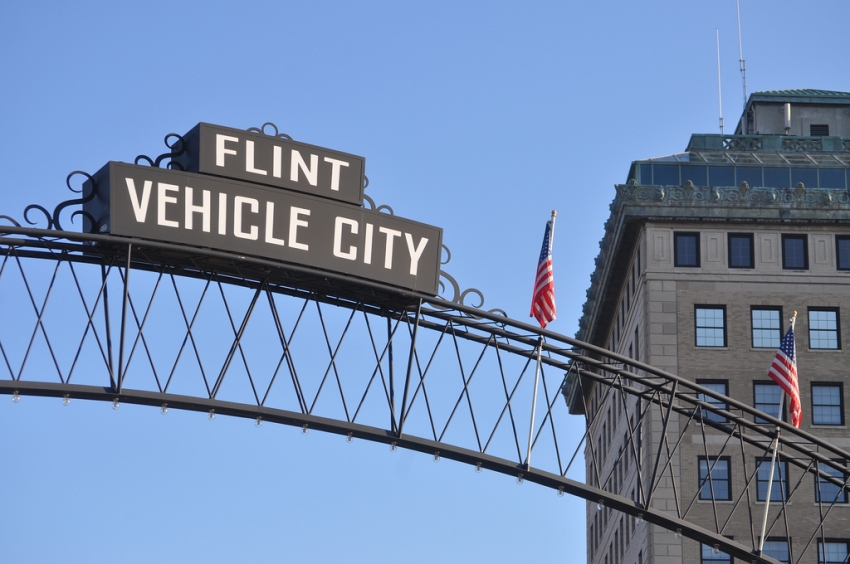 Flint’s Water Crisis Is No Accident. It’s the Result of Years of Devastating Free-Market Reforms.

The city’s poisoned water supply, as well as its devastated school system, crumbling infrastructure and high levels of violence have their origins elsewhere. Flint’s struggles are deeply tied to state efforts around the country to discipline cities through neoliberal economic reforms.

In an October 8, 2015 press conference, Michigan Governor Rick Snyder made a surprising about-face. After installing an unelected emergency manager in the city of Flint in 2011, the Republican governor was forced to reverse his appointee’s 2014 decision to switch the water supply to the Flint River. The decision was prompted by a Virginia Tech study that confirmed high levels of lead in many of the city’s homes. Despite the switch back, lead continues to leach from aging pipes as a result of the damage caused by the corrosive river water.

That same day, however, the governor doubled down on his harsh approach to Flint’s fiscal struggles. Despite the state’s culpability, Snyder would pay for only half of the $12 million necessary to return the city to safe drinking water. The rest would be paid for by the cash-strapped city itself and its powerful benefactor, the C.S. Mott Foundation, a nonprofit set up by one of GM’s original shareholders. If Flint residents wanted clean water, they would have to pony up for it.

Snyder’s parsimony fit within a larger narrative the governor had crafted around Michigan’s flagging industrial cities: Local officials and their populations had lived beyond their means. State officials would now force them to tighten their belts in service to a more efficient, competitive state economy.

On the surface, Flint’s lead-contaminated water appears to be the product of a specifically local form of negligence and corruption. But in fact, the city’s poisoned water supply, as well as its devastated school system, crumbling infrastructure and high levels of violence have their origins elsewhere. Flint’s struggles are deeply tied to state efforts around the country to discipline cities through neoliberal economic reforms.

Since 1967, the city of Flint had purchased treated water from Detroit. But in a 2014 effort to save money, emergency manager Darnell Earley (now the head of Detroit’s school system), switched Flint’s water supply to the Flint River. The expected savings amounted to roughly $2 million per year.

Almost immediately, residents complained of the water’s color, taste and odor. State officials ignored their claims. And because the city was under emergency financial management, the elected mayor and city council held no official power to change course.

Early on, warning signs appeared. Fecal coliform bacteria led to numerous alerts telling citizens to boil their water. The city resolved the problem by adding more chlorine to the water—which in turn elevated levels of trihalomethanes (TTHMs), leading to the city’s violation of the Clean Water Act.

But then something unexpected happened. Unlike the mostly impoverished Flint residents that the state of Michigan had ignored, an outsider appeared. Marc Edwards, a researcher and professor of Civil Engineering at Virginia Tech, started taking his own samples of Flint’s residential water supply. The results pointed to widespread lead contamination.

The Flint River’s corrosive water had leached lead from the city’s aging pipe infrastructure. And Edwards discovered a number of cases of official malfeasance: State and city officials had not accurately tested homes more likely to be contaminated, did not undertake follow-up testing in homes that had shown high levels of lead and had unceremoniously thrown out two samples that would have pushed the water supply above the federally mandated limit of 15 parts per billion.

Increasingly, these events suggested a cover-up at the highest levels of the state government, where officials appear to have known of lead contamination long before Edwards made his findings publics.

Many Michigan citizens seem to agree. Just this week, filmmaker Michael Moore visited his hometown, calling the majority African American city a crime scene, and advocating for Governor Snyder’s arrest. “This is a racial crime. If it were happening in another country we’d call it an ethnic cleansing”, he later wrote. On Saturday, President Obama declared a federal emergency over Flint’s water.

By most accounts, cities like Flint are victims of structural forces. The common-sense canard that globalization and technological change have made rust-belt cities unviable has been a convenient narrative for restructuring industrial cities through fiscal austerity programs. But while deindustrialization is an important part of Flint’s story, it obscures broader political forces that have decimated budgets and battered working class populations across the Midwest.

According to the Michigan Municipal League, between 2003-2013, Flint lost close to 60 million dollars in revenue sharing from the state, tied to the sales tax, which increased over the same decade. During this period, the city cut its police force in half while violent crime doubled, from 12.2 per 1000 people in 2003, to 23.4 in 2011. Such a loss of revenue is larger than the entire 2015 Flint general fund budget.

In fact, cuts to Michigan cities like Flint and Detroit have occurred as state authorities raided so-called statutory revenue sharing funds to balance their own budgets and pay for cuts in business taxes. Unlike “constitutional” revenue sharing in Michigan, state authorities could divert these resources at their discretion. It is estimated that between 2003-2013 the state withheld over $6 billion dollars from Michigan cities.

And cuts to revenue sharing increased in line with the state’s political turn. Democrats suffered major losses in the state legislature in 2010, while the governorship switched hands with the election of Republican Rick Snyder in the same year. In a climate of austerity at both the state and national levels, and with Tea Party conservatives dominating the Republican Party, cuts to cash-strapped municipalities opened the door to claims that cities like Flint and Detroit were living beyond their means.

With city budgets in the red, state authorities imposed new forms of market-based discipline on struggling municipal governments. In 2011, Snyder implemented the Economic Vitality Incentive Program (EVIP), a new statutory revenue-sharing program that required cities to undertake market-friendly reforms. And while diminished revenue sharing had been taking place since the early 2000s, the new statutory guidelines specifically based state funding on austerity measures taken at the local level.

Revenue sharing was now tied to accountability and transparency, consolidation of services and employee compensation. According to Snyder’s plan, local governments would be provided statutory revenue if they cut back spending on expenditures such as health care costs for new employees. Services would be consolidated or privatized, and the overall thrust of the program positioned Michigan cities as businesses providing competitive products to their citizen-consumers.

Meanwhile, as the amount that the state of Michigan shared with struggling cities continued to drop, Snyder presented himself as a budget-balancing technocrat—possible in part through his appropriation of these very municipal funds.

More importantly, cuts in revenue sharing created inevitable fiscal difficulties at the urban level. But beyond spreadsheets and line items, these predictable budget crises were political in nature. They opened up the door to emergency management in Flint and Detroit, in which a handpicked technocrat of the governor’s choosing could now sideline democratic governance. In late 2011, the governor installed his first emergency manager in Flint.

Emergency management has done what democratic politics under austerity could not. While the city’s emergency manager called City Council efforts to return Flint to Detroit water “incomprehensible,” Flint’s most recent budget deficits have been cut on the backs of schools, public health and city workers.

As a consequence, local nonprofits and foundations have picked up the slack. The Flint-based C.S. Mott Foundation, with an endowment of close to $2 billion, has bankrolled services from homeless shelters, to soup kitchens, to the upmarket transformation of downtown with new restaurants, a wine bar and farmer’s market.

Emphasizing personal responsibility and self reliance, the Mott Foundation is crucial to the survival of many of the city’s poorest residents and the services they rely upon. But it also represents the post-democratic nature of urban governance in cities like Flint. While unelected officials cut services for the needy, the individual agendas of nonprofits decide who is worthy of support. These changes encourage Flint residents to view access to services such as education or health as a form of private largesse, rather than a basic human right.

The long agony of neglect

The spectacle of a community knowingly poisoned has rightly captured the attention of the national media. But Flint’s water emergency also speaks to a much larger crisis. Flint has spent the last two generations battling hostile suburbs for a rational distribution of regional taxes, as Daniel Hertz recently explained in these pages. The competition between municipalities has pitted Flint against its suburbs, producing a race to the bottom in taxation as local officials strive to produce a “better business environment” at the expense of schools, health and public safety.

The city has been blindsided by GM’s strategy of profit maximization, as the company shifted tens of thousands of jobs to the South, West, and beyond, in order to avoid unionized workers. Of the 80,000 GM jobs once located in Flint, some 8,000 remain, while unemployment is double the national average and poverty hovers at 40 percent of the population.

At the same time, the city has seen state interest wane as its demographics have shifted as a result of white flight and regional impoverishment. And while state officials have now recognized the city’s water problem, little has been said about its shuttered schools, lack of safety or grim poverty statistics.

The few public funds that do exist for Flint demonstrate the narrow vision of contemporary urban and social policy. The state government has earmarked federal “Hardest Hit” funds, meant to keep underwater homeowners in their houses, for demolishing vacant structures instead. Likewise, local officials and elites advocate for “shrinking city” strategies in Flint and Detroit.

These policies offer no solutions to struggling residents, instead assuming that poor and high vacancy neighborhoods will eventually revert to urban green space following a period of government inaction. What happens to the poor and working-class people who used to live in those new green spaces? No one seems to care.

Today Flint is bankrupt. Not because its fiscal books are not in order—because it has been bankrupt by the poverty of urban policy, by the willful neglect of authorities and a system that sees little value in the people of this city. It is a city managed today by unelected state authorities and kept afloat by the beneficence of generous, but unaccountable, nonprofits.

Flint’s poisonous water is merely the latest, and most high profile example of a bankrupt system of neoliberal governance.

Jacob Lederman is an assistant professor of sociology at the University of Michigan-Flint.