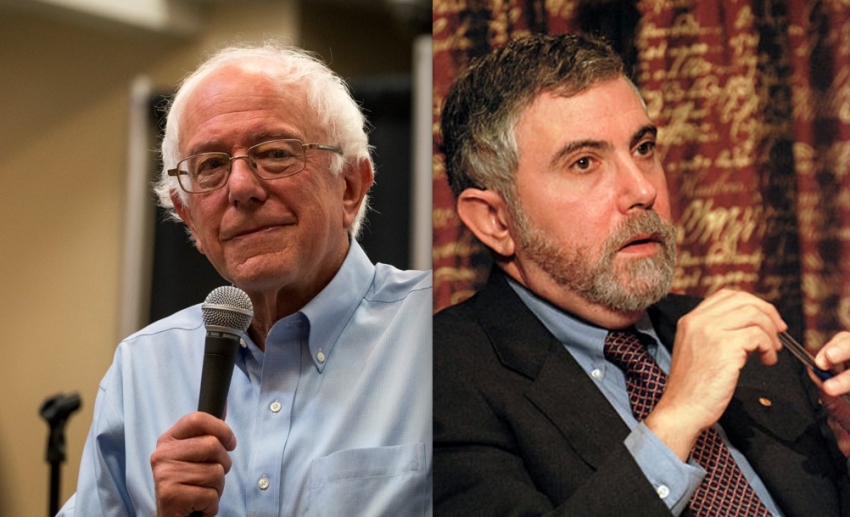 Bernie isn’t some kind of wild-eyed radical. He’s actually the most pragmatic candidate in the race.

In his recent column in the New York Times, Paul Krugman contrasts Hillary Clinton’s “hardheaded realism” with Bernie Sanders’ “idealism.” In Krugman’s view, Sanders and his starry-eyed supporters don’t understand “How Change Happens” (the title of the column), while Hillary Clinton and her more pragmatic supporters do. He’s wrong—about what Sanders’, and his supporters’, “theory of change” is and about how change happens.

Linking Clinton to Obama, LBJ and FDR, all of whom are portrayed as tough-minded reformers who were effective because of their willingness to compromise, Krugman states:

[T]he question Sanders supporters should ask is, When has their theory of change ever worked? Even F.D.R., who rode the depths of the Great Depression to a huge majority, had to be politically pragmatic, working not just with special interest groups but also with Southern racists.

Krugman portrays Sanders as a “high-minded leader” seeking to “conjure up the better angels of America’s nature and persuade the broad public to support a radical overhaul of our institutions.” The problem is, “as Mr. Obama himself found out as soon as he took office, transformational rhetoric isn’t how change happens.”

If Sanders believed, as Krugman suggests, that change happens solely, or primarily, through “transformational rhetoric,” this critique would have some bite. But Sanders believes no such thing.

As Sanders has made clear over and over, to enact the types of comparatively far-reaching changes he is seeking (which are, we should always remember, quite moderate by global standards)—universal healthcare, tuition free college, a $15 per hour minimum wage, increased taxes on the wealthy, legal reform that makes unionization easier, overturning Citizens United—requires nothing short of a “political revolution.”

Sanders should do much more to flesh out what exactly he means by that revolution. (One way to do this would be to pay closer attention to the types of changes that have occurred in Venezuela and other countries in Latin America over the last 15 years.) But in marked contrast to Clinton and Krugman, Sanders understands that bringing about a political revolution requires building a mass movement—not just electing a new president, however progressive he or she may be.

“Returning to a government of, by and for the people—not the billionaires and giant corporations—will not be easy,” Sanders has said. “We aren’t going to get there just by electing a president who believes in and is committed to restoring our democracy. We’re going to get there by building a movement—a movement with enough power not only to elect a president but to insist that all of our elected representatives return power to the people, a movement that not only identifies the deep corruption of our politics but rejects cynicism and instead insists on solutions, action and accountability.”

History shows that Sanders’ (actual) view of how change happens, through mass movements, is far more accurate than Krugman’s view that change happens through enlightened elites willing to compromise with their adversaries. (The same goes for the caricatured, and deeply inaccurate, view that Krugman ascribes to Sanders of change occurring through “transformational rhetoric.”) The important reforms enacted by FDR—social security, laws establishing workers’ rights and a federal minimum, regulation of the financial industry—did not occur because he was an enlightened elite willing to compromise; they occurred in the context of the great labor upsurge of the 1930s, when millions of workers organized and engaged in militant direct actions like the 1936-37 general strike in Flint, Michigan.

The same pattern holds for the reforms implemented by LBJ, the other key figure mentioned by Krugman. The civil rights and social protection legislation put forward and passed by the Johnson administration did not occur solely or primarily because Johnson was “pragmatic” and willing to compromise. Johnson was pushed to enact such legislation by powerful movements, the civil rights movement in particular.

Radical change can and has only come about through massive collective struggle in unremitting opposition to the entrenched power of the corporate and political elite. The fact that Sanders appears to understand this shows that he is not the “idealistic” candidate that Krugman and others portray him to be.

It’s through grassroots-level organizing and upsurges—change that Sanders’ “political revolution” hints at—that we can win anything at all. When it comes to knowing what it takes to create genuine political transformation in this country, Sanders is not the wild-eyed radical Krugman paints him as. He’s actually the most pragmatic candidate in the race.

Gabriel Hetland is an assistant professor of Latin American studies and sociology at the University at Albany, SUNY. His research examines how ordinary people can affect the decisions that affect their lives through social movements, electoral politics, labor organizing and the creation of participatory institutions. His work has been published in academic and popular venues such as Qualitative Sociology, Work, Employment and Society, Latin American Perspectives, The Nation, Jacobin and NACLA.