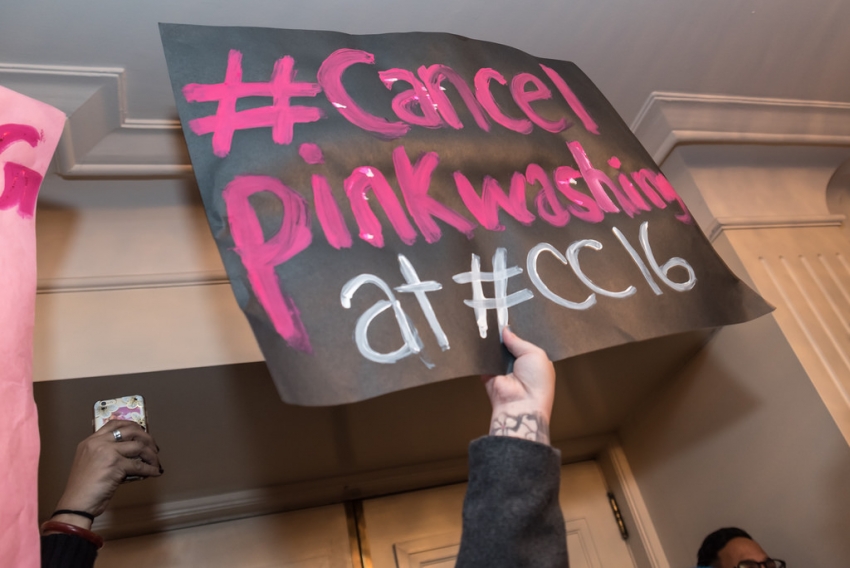 A protester holds up an anti-"pinkwashing" sign at the 2016 Making Change conference in Chicago. (Sarah-Ji / Love and Struggle Photos)

LGBTQ Protests Against Israel Are About Justice, Not Anti-Semitism

Israel uses a reductive version of “gay rights” to market itself with a positive, welcoming image—despite its egregious human rights abuses against Palestinians.

There’s no pink door in the apartheid wall—pinkwashing erases queer Palestinians, or uses them as props for a narrative in which Israel becomes a savior, while intentionally distracting from the oppression, violence and racism all Palestinians face.

I first heard the term “pinkwashing” at an event in Seattle four years ago, where I saw that, as a Jewish queer, I was the prime target for Israel’s latest public relations strategy: marketing Israel as an LGBTQ-friendly destination to shift focus from its human rights abuses against all Palestinians. A successful push by local activists to cancel an Israel-sponsored speaking event of LGBT Israelis had been followed by intense backlash from several LGBTQ and Jewish organizations. At a report-back, Palestinian and Jewish activists clarified why they had organized to cancel the tour and led a discussion on pinkwashing, insisting that, as queer people, we ask critical questions about the use of our identities. Which queer voices are allowed to be heard? Whose experiences are erased? What power structures are these narratives upholding?

I felt a visceral response upon learning of the state-sponsored tour and seeing queer identity wielded as a branding tactic—flattened, simplified and packaged to assure U.S. queers, especially white Jewish ones, that Israel was “just like us,” with the unspoken, racist implication that Palestinians, Arabs and Muslims aren’t.

Events last week brought pinkwashing to national attention: the leadership of Creating Change, a major LGBTQ conference, initially cancelled but then reinstated a reception by Israel advocacy organization A Wider Bridge. A Wider Bridge seeks to develop ties between LGBTQ people in North America and Israel towards LGBTQ Americans having a “meaningful connection with Israel”; they also partnered with the Israeli government and right-wing Israel advocacy group StandWithUs to put on the Seattle event mentioned above. Many activists attending the conference, however, refused to remain silent about A Wider Bridge’s pinkwashing work, and hundreds of queer and trans attendees protested and chanted in the hallways, halting the reception midway. I had chills watching the #cancelpinkwashing tag on Twitter that evening, hearing a multiracial protest for Palestinian liberation resound through the hotel hallways, led by queer and trans people of color demanding and building a movement against all systems of oppression.

With both the initial cancellation and the later protest, however, the backlash has been swift, as supporters of A Wider Bridge attempt to bury the core issues under alarmist language, especially by conflating Jews with the state of Israel. An article in Haaretz falsely accused the protesters of violence, and an article in Slate claimed that the LGBT movement has an anti-Semitism problem.

Mark Joseph Stern, in the Slate piece, mischaracterizes the protesters’ argument as one claiming that “Israel’s effort to grant civil rights to LGBTQ people is really just an insidious attempt to cause a distraction from its human rights violations elsewhere.” Rather, pinkwashing critics have been clear that their critique is in the use of a reductive version of “gay rights” to market Israel, branding the country with a positive, welcoming image despite its egregious human rights abuses against Palestinians (both queer and otherwise).

When he speaks of general “civil rights to LGBTQ people,” this ignores that such “rights” do not apply in the same way to everyone governed and occupied by the Israeli state. Without the context of Palestinian queer voices, he’s left to assume that an amorphous anti-Semitism was at the root of the protests: “They stormed a reception for a bunch of Jews.”

This idea advances an incorrect and harmful definition of anti-Semitism that equates dissent against Israel’s oppressive policies with anti-Jewish bigotry. Meanwhile, this and other similar pieces conceal the lived experiences and political expressions of Palestinians, including queer Palestinians, while avoiding a much-needed discussion around the complicity of LGBTQ institutions in structures that oppress members of their own communities.

The allure of dialogue

A Wider Bridge has a long history of ignoring and covering up Israel’s human rights abuses against Palestinians by touting Israel’s “gay-friendly” reputation. Upon learning of their participation at Creating Change, a diverse coalition, with LGBTQ Palestinian organizations and leaders at the center, came together to oppose it. The coalition argued that support of Israel’s “military occupation, ethnic cleansing, racism and colonialism [is] incompatible with queer liberation and with fundamental human rights.”

Their organizing led to the initial cancellation of the event, but the backlash from institutional players was quick, leading to the first round of misleading op-eds and the uncertain National LGBT Task Force, which runs the conference, reversing their decision.

The statements from A Wider Bridge and allied groups sound appealing at first — why not come together for dialogue, include everyone, find the middle road? But, as is often the case with appeals to dialogue between parties in different social positions, this conceals the power dynamics at play and attempts to distract from the ongoing violence Palestinians face from the Israeli state. Appealing to a simplistic notion of tolerance—and erasing issues of power in the process—are key components of any pinkwashing effort.

As the over 50 organizations who signed on to the coalition statement note:

Pinkwashing is an explicit strategy that the state of Israel and Israeli advocacy organizations engage in to try to improve Israel’s image which has been tarnished by its global reputation for ethnic cleansing and apartheid. By shifting the focus to a very narrow definition of LGBT rights (exclusive, of course, of queer Palestinians), these Pinkwashing efforts normalize the occupation of Palestinian land by distracting from the violent, inhumane actions of the Israeli settler state.

Pinkwashing is an integral part of Israel’s “Brand Israel” public relations strategy, which appeals to racist and colonial notions of Palestinians, Arabs and Muslims as backwards and intolerant in contrast to the supposedly enlightened Western liberalism of Israel. A simplified notion of “gay rights” has become one of the most effective ways to mark that Western identity and is used by organizations like A Wider Bridge to build support for the Israeli state. An ongoing history of apartheid, occupation and settler-colonialism is replaced with a feel-good story of liberal tolerance.

But as anti-pinkwashing activists have long observed, there’s no pink door in the apartheid wall—pinkwashing erases queer Palestinians, or uses them as props for a narrative in which Israel becomes a savior, while intentionally distracting from the oppression, violence and racism all Palestinians face.

The effort to exclude A Wider Bridge from Creating Change was not about excluding Jews, but rather to make clear that our struggles for liberation are all interconnected, and that support for occupation, colonialism and discrimination has no place in our community. There is a wide range of opinion within the Jewish community on Israeli policy, and growing numbers of us are joining the movement for justice in Palestine.

The evening of the reception, a group of queer Jews led an alternative Shabbat in solidarity with Palestinians. And, contrary to the alarmist claims about the protests as inherently anti-Semitic, queer Jews were part of the anti-pinkwashing organizing and protests from the beginning.

Pinkwashing isn’t only about Israel: at the very same conference, the U.S. Immigrations and Customs Enforcement (ICE) agency was invited to lead a workshop on immigration—even as ICE actively conducts raids to deport Central American refugees (who are fleeing violence rooted in U.S. imperialism). How else can we understand the workshop but as an attempt to pinkwash away their brutality? Migrant justice groups organized effectively to cancel that workshop, but rightly continue to demand answers from the National LGBTQ Task Force: Why was ICE invited in the first place?

As queer people, we need to continue to develop our thinking and approaches to avoid the traps of pinkwashing, to resist single-issue politics that help LGBTQ people in positions of relative social power while ignoring the realities that affect the most marginalized in our communities. We have to hold institutions that claim to speak for us accountable, as we try to understand and undermine oppressive power structures rather than reinforce them.

The National LGBTQ Task Force should learn from the work for justice that many of this year’s presenters, attendees and speakers do, and respond to the demands from the #cancelpinkwashing coalition organizing for justice in Palestine, by committing to oppose colonialism and state violence everywhere, from the United States to Central America to Israel. Whether they do or not, the grassroots movement for global justice and liberation we saw at the Chicago pinkwashing protest will only continue to grow.

Jimmy Pasch is the West Regional Organizer at Jewish Voice for Peace.