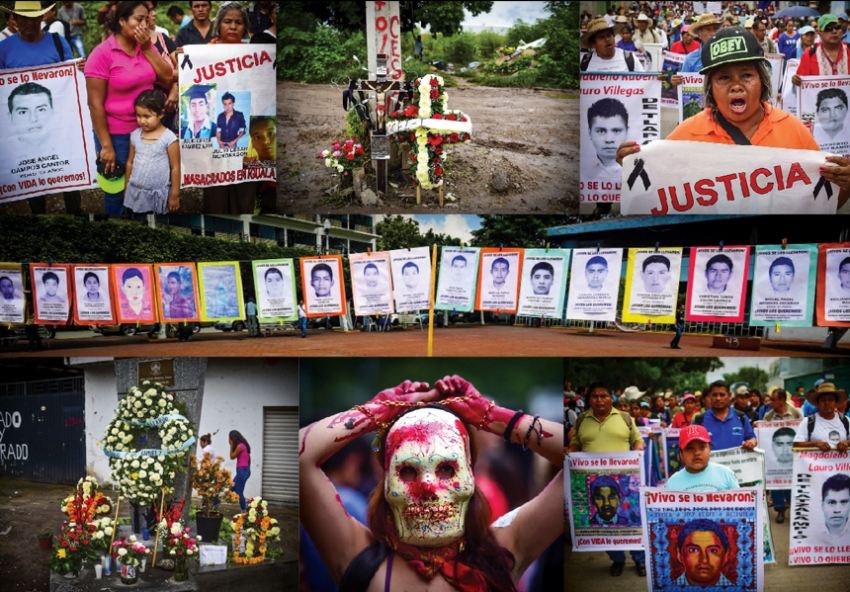 Since the 43 Students Went Missing, 130 Bodies Have Been Found Outside Iguala, Mexico

The students’ bodies haven’t been found, except for one bone fragment. But rural Mexicans are seeking answers in a larger epidemic of disappearances—and unearthing graves.

Contreras has marked 78 possible graves, none of which turned out to be his son’s.

Iguala, Guerrero, Mexico—On a Saturday afternoon, Iguala’s market is not as crowded as it once was. The grills at the entrance are sizzling but empty, and for months the stalls have held the same jewelry for sale. Life has changed since 43 students from a nearby teacher-training college went missing more than a year ago.

“We don’t sell,” says Carmen, 30, a jewelry merchant. Her stall sits right in front of the bus station where, on the night of Sept. 26, 2014, students from the Ayotzinapa Normal School, 90 miles away, “borrowed” three buses to take to a protest in Mexico City, and then vanished.

Commandeering buses is a common tactic of the normalistas, teacher-training students from poor and rural areas who are resisting nationwide educational reforms. They have shut down radio stations and blocked Mexico’s main highway in their efforts to preserve labor protections, instruction in indigenous languages, and the Marxist, social-justice curriculum that became the standard in rural schools in the wake of the Mexican revolution.

On their way home, the Ayotzinapa students were ambushed by municipal police. Three were killed and another critically injured in the confrontation. Forty three vanished.

The disappearances sparked protests across Mexico and made international headlines. State authorities soon declared that bodies that had been found in a mass grave in the hills above Iguala could be those of the missing students. But the 38 bodies were not the students’ and have yet to be identified. To date, only one bone fragment, which the government said had been found in a river, has been positively identified as belonging to a missing student: 19-year-old Alexander Mora.

Former Iguala Mayor José Luis Abarca and his wife, María de los Ángeles Pineda, are accused of masterminding the kidnapping. According to the government’s version, Abarca was concerned that they would disrupt an event in Iguala, and local police intercepted the students and handed them over to the drug gang Guerreros Unidos. A report by the Inter-American Commission of Human Rights questions this explanation, noting that military and federal police forces were monitoring the students’ movements at the time of their disappearance.

Iguala’s vendors resent the narrative that local corruption is solely to blame. “On the news you only see pure gossip, things that are good for them, for the government,” says Carmen, who requested a pseudonym out of fear of the narcos. “It screws the citizens.”

“My customers from outside who buy wholesale told me that they are afraid, that in here people steal and kill,” says Carmen. “Even my aunt who lives in Arizona calls me and asks if I’m okay, because she saw Iguala on the news. But here everything is really quiet: no tourists, no sales, no nothing.”

“I can’t give information,” says a middle-aged seller of pirated discs, ducking behind her merchandise. “There are people passing by.”

“We are scared, that’s why we don’t talk,” says Carmen. They are scared of the narcos, who often position halcones (“falcons”) in public spaces as the gang’s eyes and ears. The pickups of the federales, the Mexican federal police, do nothing to reassure.

The merchants who do talk, including Carmen, describe life before September 2014 as calm and without major troubles. The streets had no potholes, the public gardens were beautiful, and you could walk at night without fear. “Some people say that it was a narcogovernment, but we were fine,” Carmen says. “Once I heard three gunshots, but it was between them, they were fixing their issues without bothering us.”

Not all residents agree with this rosy history. Members of the local group The Other Disappeared of Iguala describe a town where, for the last decade, people have simply vanished, but no one spoke of it; talking could get you killed.

The surge of violence and disappearances in Guerrero, and across Mexico, dates back to when President Felipe Calderón declared a nationwide War on Drugs in 2006. What changed after the 43 was that hundreds of families throughout Guerrero gained the courage to proclaim that their relatives were also missing and criticize authorities for failing to investigate. After talking to the lower-ranking members of drug cartels, many families say they’ve been told that federal and state security forces were involved.

Meanwhile, human remains continue popping up. The Other Disappeared has uncovered more than 130 bodies since beginning searches in November 2014.

Guadelupe Contreras’ son, Antonio Iván, 28, disappeared from Iguala on Oct. 13, 2013. On a Monday morning, after pulling a weekend-long shift at the automotive shop where he worked, he had stopped by a friend’s auto parts store, then headed home. He never arrived. His wife and three kids are still waiting. That’s a disappearance: Your loved one simply vanishes without explanation.

Every Sunday morning, Contreras, 58, leaves his house to search for his son. He meets roughly 20 members of The Other Disappeared in the center of town, where they grab their shovels and picks and set out to roam the rugged hills outside the city. Often escorted by the federales, volunteers walk for hours looking for signs of unmarked graves—loose dirt, disturbed soil, garbage, clothes—and marking them with stones or red flags.

Contreras has marked 78 possible graves, none of which turned out to be his son’s.

Members usually do not excavate the graves for fear of contamination, but did in November 2015, to show authorities there are plenty of bodies to recover. From a hole 2 feet deep, the earth disgorged a fibula, tied up with rope. The Attorney General’s office sent government agents to exhume the remains. Seven bodies were found. “At first it hurts [to find a grave] because you imagine that is your relative,” says Adriana, 30, who is looking for her brother. “But then you get used to it. You get used to the pain, really, because the pain is persistent.”

According to Contreras, 70 percent to 80 percent of the marked spots turn out to be graves. But the government’s work is slow. “It took them eight to nine months to get the [first] 104 bodies,” he says. Only 17 of those have been identified and handed over to their families.

“We saved them the work of six months,” says Contreras. “Hopefully they will channel it well.” The group continues to demand the creation of a national search program.

Mexico is facing international heat over the disappearances. In February 2015, the U.N. Committee on Enforced Disappearances published a report criticizing the investigation of the disappeared students and calling for the prosecution of any authorities involved. In October, the U.S. Congress rebuked Mexico for its lack of progress on human rights by approving only about $148 million in security aid, the lowest since 2011.

In December, Mexican President Enrique Peña Nieto announced a draft law for the creation of a national search system and a missing persons registry, among other things. It is likely to pass, but unlikely to be well implemented, given the widespread government collusion with drug cartels.

What’s clear is that families will continue digging with their own hands and asking the same question they’ve been asking since 2006: Where are our children, our husbands, our loved ones?

Chantal Flores is a freelance journalist in Mexico City. She is currently working on her first book, focused on the parents of Mexico’s disappeared. Her writing has appeared at Vice, Rolling Stone Mexico and Upworthy.