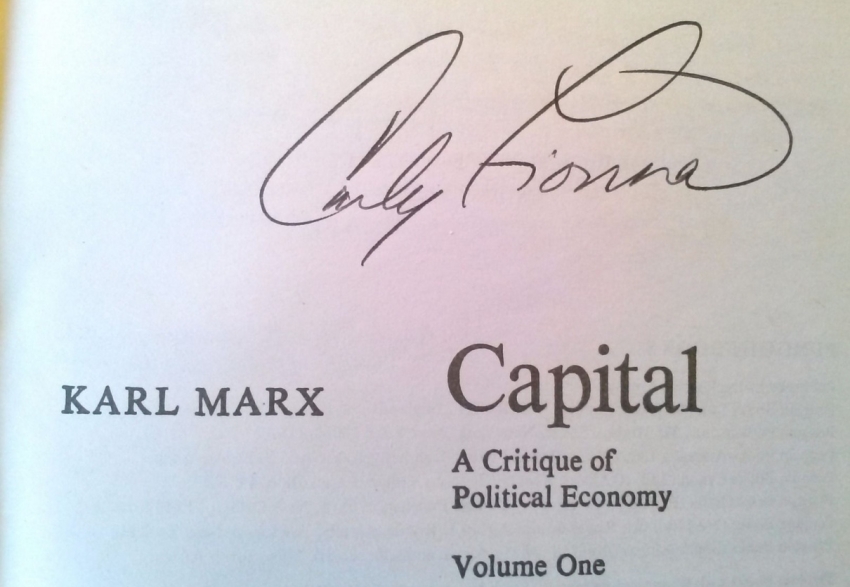 But time is running out.

If Karl Marx had lived long enough to see Carly Fiorina’s failed GOP campaign, he might’ve been impressed with the former Hewlett-Packard CEO. After all, Marx only preached about the overthrow of capitalism—Fiorina had actual hands-on experience bringing a major corporation to its knees.

Perhaps that’s why Fiorina personally signed a copy of Marx’s Capital Volume I in 2007 at a Manhattan Barnes & Noble, a priceless piece of political memorabilia now up for sale on eBay.

Peter Hogness, a labor activist in New York and a former high school classmate of Fiorina's in Palo Alto, is selling the book. He says the signing took place during a 2007 book tour for her memoir, Tough Choices. He presented Capital to Fiorina during a book-signing event and asked if she would sign it instead of her memoir. “Oh, I've read this!” she said upon seeing Marx's classic work of political economy. She agreed to sign it.

Hogness says Capital seemed like a more interesting choice than Fiorina’s memoir for his bookshelf. Sure enough, at Goodreads, Marx’s treatise has a 4.17 average star rating—narrowly edging out the 3.63 average rating for Tough Choices. (Hogness says he bought and read Tough Choices, and “it's not a bad read.”)

He believes the book was appropriate given Fiorina’s record.

“The book describes capitalism’s relentless drive to reduce labor costs regardless of the human cost, and how over time this helps create a ‘reserve army' of the unemployed,” Hogness explained. “Before Fiorina became its CEO, Hewlett-Packard was known for its reluctance to lay off employees. But she laid off tens of thousands without hesitation, and in that sense made HP a more thoroughly capitalist enterprise.”

The book is described as being in “excellent condition,” and bidders have nine days to win the book for themselves. At present, after two bids, the price is up to $102.50. The proceeds from the sale will go towards Socialists for Bernie Sanders, a grassroots organization separate from the Sanders campaign that is working to get the Senator elected.

“By signing this copy of Capital Volume I, Carly Fiorina has increased its exchange-value,” Hogness said. “And I can’t think of a better use for that exchange-value than to help to elect Bernie Sanders as our next president.”

There’s no word yet on whether there’s a copy of Richard Dawkins’ The God Delusion signed by Ted Cruz floating around somewhere.

This post has been updated to reflect Hogness' claim that Fiorina said she had read Capital.