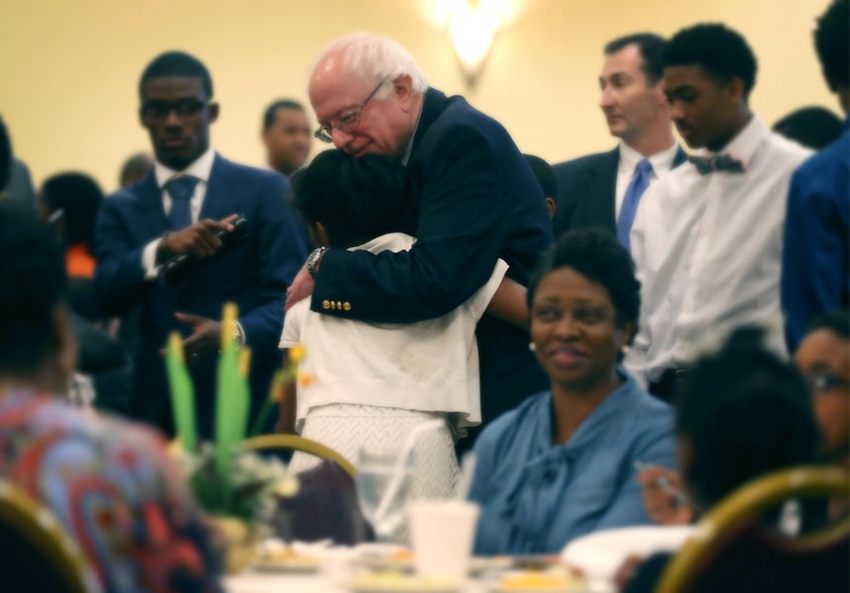 Bernie Sanders Is Narrowing the Gap in South Carolina

He has an enthusiastic field campaign and growing support from black activists and politicians. Will it be enough?

'I knew Bernie because he was always for the union. He always supported our issues. But it sealed the deal when I found out that Bernie was in the civil rights movement.'

Speaking in Harlem on Tuesday, February 16, Hillary Clinton unveiled to the nation her $125 billion plan to combat systemic racism and revive poor, non-white communities. But the most important group she was addressing may have been African Americans voting in the South Carolina primary on February 27. Clinton’s campaign has long seen them as a political safety net if she stumbled at the start of the nominating season, as she did with her virtual tie in Iowa and a big loss in New Hampshire—although she began to regain her footing with her Nevada victory.

Sen. Bernie Sanders has intensified his own fight for South Carolina and for the black vote. In November 2015, he trailed Clinton there by 50 points, according to Real Clear Politics’ poll aggregator. By mid-February, he had closed the gap to 24 points. While Clinton was speaking in Harlem, Sanders was speaking to a group of black ministers in Charleston about the need to reform police, prisons and the entire criminal justice system. Two days later, he reaffirmed his plans for addressing black community needs in a Washington meeting with leaders of nine historic civil rights groups.

Yet two days ahead of the primary, election analyst Nate Silver gives Sanders a less than 1 percent chance of winning South Carolina. Brett Bursey, director of the South Carolina Progressive Network, sizes up the prospects only a bit more optimistically: “If there were six months until the primary, I think Bernie could win.”

It’s important to remember, however, that winning or losing a specific state isn’t as important as the slow accumulation of delegates—and because of that, margins matter.

In Silver’s projections, if Clinton won South Carolina by 11 points, she would be on a path to a tie. To achieve that, Sanders would need to beat the mid-February polling projections of 24 points by another 13 points.

If Sanders is able to tighten the gap in South Carolina further on Election Day, it will be due to a much larger field operation in South Carolina than Clinton has mustered, and to a growing roster of black politicians, movement leaders and intellectuals lining up behind him.

Each candidate has deployed surrogates to appeal to black voters—for example, civil rights icon and Congressman John Lewis is stumping for Clinton, and former NAACP president Ben Jealous for Sanders. But the Sanders campaign has effectively used many “ordinary” black supporters, politicians, movement leaders and black intellectuals in ads and in speeches. Former Ohio Democratic state senator Nina Turner, who once supported Clinton, is now campaigning for Sanders. He also has the backing of Erica Garner, the daughter of Eric Garner, a victim of a stranglehold by New York police whose last words—“I can’t breathe”—became a rallying cry of the Black Lives Matter movement.

“We are closing the gap,” says South Carolina state representative Terry Alexander, a Clinton supporter in 2008, now a leading black supporter of Sanders. “We’re making a difference. It’s his message and how he gives people hope. Clinton is old style, change bit by bit.”

Sanders’ campaign has 10 offices in South Carolina with 240 staff, 80 percent of them African-American, compared to two offices with 14 full-time staff for Clinton, backed up by nine small get-out-the-vote offices.

Beyond recruiting volunteers from within South Carolina, Sanders is counting on some key backers from across the country—such as Martese Chism, a nurse for more than 23 years at the John H. Stroger, Jr. Hospital of Cook County, Illinois, and a member of National Nurses United, the first major national union to endorse Sanders.

While Sanders was speaking, Chism was riding through South Carolina in National Nurses United's red #BernieBus, drumming up support for him.

Chism is also the great-granddaughter of a grassroots civil rights leader, Birdia Keglar. In 1966, Keglar was returning home from Jackson, Miss., with four other civil rights supporters after testifying before Robert F. Kennedy about voting rights violations. White racists forced them off the road and beat and tortured them, severely injuring two of the three men and killing the two women in the car—including Keglar, who was decapitated.

With such a powerful personal connection, Chism says she’s felt a calling to work for civil rights since she was 5 years old. That’s what brought her out to campaign for Sanders.

“I knew Bernie because he was always for the union,” she says. “He always supported our issues. But it sealed the deal when I found out that Bernie was in the civil rights movement.”

As she knocks on doors, she says, she’s found that many South Carolinians had not thought about the primary and knew little about the candidates. “I wouldn’t say they’ve changed their minds about Hillary,” she said, “but they were looking for a fighter, and they have one now ”

A debate within the International Longshoremen's Association Local 1422 in Charleston, a major East Coast port, is one sign that black voters are still in play. The influential, predominantly African-American local has 600 members. In October, local president Ken Riley, endorsed Clinton as the practical choice—the candidate who could win and get things done. But then Charles Brave, Jr., a rank-and-file member of Local 1422 and vice-president of the state AFL-CIO, began drumming up support for Sanders within the local. He believes that now, if members were to take a vote, a clear majority would support Sanders.

The young and the working-class

There are factors beyond the black vote that could sway the race. The South Carolina AFL-CIO has taken no position because it is barred from doing so by national rules (though in June 2015 they unsuccessfully urged the national AFL-CIO to endorse Sanders). But state AFL-CIO President Erin McKee says that South Carolina’s small labor movement has been working hard to make members and other workers aware of the importance of the primary. State AFL-CIO President Emeritus Donna Dewitt thinks that turnout will increase among workers who are disengaged from electoral politics. Some of them may cast their votes for Trump, joining the significant share of the state’s union members who normally vote Republican. But DeWitt believes many workers who had given up on politics will be turning to Sanders because of his pro-union, class-oriented political appeal.

Also, as in other states, Sanders has a strong, if hard to estimate, appeal with students and other young people. Young people vote less often than older people, but have been coming out in near-record numbers this primary season, second only to 2008, when the huge youth turnout helped propel Obama to office.

Amber Lay, 24, and Ashley Crawford, 28, show the potential for Sanders to appeal to youth even in the conservative South. They recently moved to Charleston, S.C., from their small, rural hometown in Alabama after finishing college. They have bigger career plans but are getting by with precarious service-sector jobs—dog grooming and hospitality work. They grew up in conservative Republican, fundamentalist Christian, “middle class” homes—a middle class they now see as threatened in their lifetimes.

“They’re ‘Bible thumpers,’ ” Lay said of her hometown as we chatted at a suburban laundromat in October. “As long as it can be twisted into being Biblical, they’ll vote for it.”

College life and education helped them to think more independently, they said, and they grew more conscious of both racism—the motivation behind much criticism of Obama, whom they supported—and sexism. Now they favor Sanders because he is a stronger advocate for issues that mean a lot to them: such as equality (with regard to race, gender, sexual orientation and economics) and environmental protection. “There is too much focus on [Clinton] being a woman,” Lay said. “[Sanders is] for a higher minimum wage,” Crawford said. “He’s been independent. He seems very proactive on environmental issues. That’s a hot topic for me and Amber.”

A surge in youth votes, if added to the leftward shift already underway during the Obama years, could add to the momentum towards Sanders in the final days of the campaign.

Even if he does not win South Carolina, which would be a remarkably unlikely  accomplishment, Sanders may do well enough to plausibly claim that he has reduced parts of Clinton’s “firewall” to a pile of rubble that has felt the Bern.