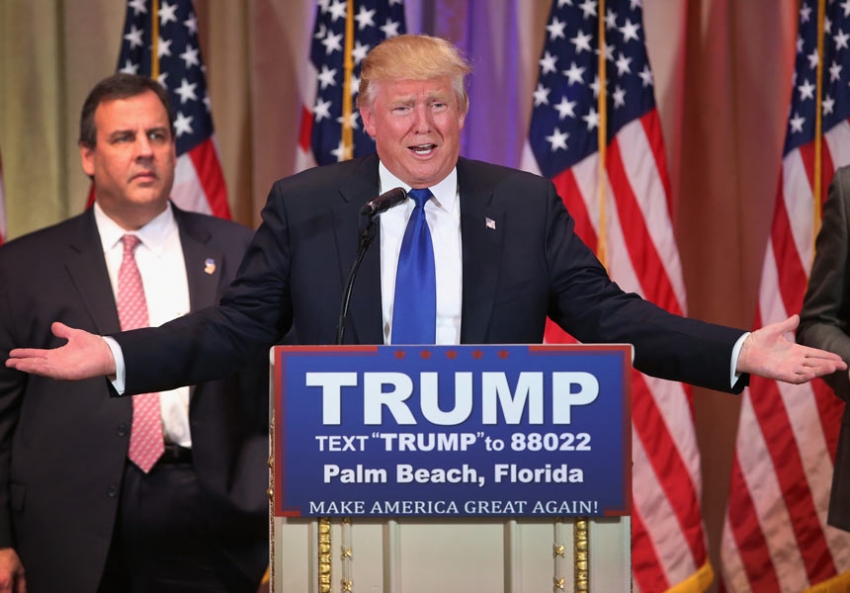 After Decades of Bigotry and Antipolitics, the GOP Got What It Deserves in Donald Trump

With Trump, the GOP is reaping what it sowed over the last seven years. But there’s no time for schadenfreude: Trump is now everyone’s problem.

Antipolitics, far from being a Zika-style virus smuggled into the vulnerable GOP host organism by a single “outsider” populist presidential hopeful sporting a Chia Pet pompadour, has been the very lifeblood of the Republican political class since the dawn of the Obama era.

“The one thing that most perplexed him was that there could be a dictator seemingly so different from the fervent Hitlers and gesticulating Fascists and the Cæsars with laurels round bald domes; a dictator with something of the earthy American sense of humor of a Mark Twain, a George Ade, a Will Rogers, an Artemus Ward. Windrip could be ever so funny about solemn jaw-drooping opponents, and about the best method of training what he called ‘a Siamese flea hound.’ Did that, puzzled Doremus, make him less or more dangerous?”

Of all the many puzzlements surrounding the meteoric rise of Donald Trump—who, after picking up at least 7 of 10 Super Tuesday states, including Massachusetts by a gaudy 30-point margin, would appear to have the Republican presidential nomination firmly in his vulgar, short-fingered grasp—perhaps the greatest is that the GOP’s leadership caste should regard it as a puzzlement at all.

Ever since Trump’s decisive thrashing of his GOP rivals in South Carolina and Nevada, we’ve had no end of breast-beating displays of rage and bewilderment from the sanctums of Republican power. Robert Kagan, a reliable neocon national security hawk, took to the Washington Post op-ed section to pronounce Trump a “Frankenstein monster” re-animated by the forces of resentment unleashed by dimwitted party strategists—and  concluded with his own endorsement of Hillary Clinton for the presidency. (Um, yay?) David Brooks bewailed the rise of Trumpism as a “cancer” and a worrisome lurch into barbarous “antipolitics” and European-style authoritarianism. Brooks’ conservative pundit colleague at the Times, Ross Douthat, glumly concurred—but ingeniously found a way to blame Trump’s rise on Barack Obama, thereby, one imagines, managing to dispel the permanent migraine of this presidential cycle for right-wing intellectuals for the handful of fugitive hours before Douthat’s feeble column was laughed off the Internet.

Meanwhile, in a revealing portrait of the fitful effort to assemble an anti-Trump coalition within the GOP leadership, New York Times reporters Alexander Burns, Maggie Haberman and Jonathan Martin cite no less an eminence than Senate Majority Leader Mitch McConnell—the grand architect of the scorched-earth obstructionist assault on all Obama-backed legislation in Congress—as so determined to prevent a Trump nomination from damaging the party in down-ticket races that he endorsed the idea of the GOP financing negative ads against its own nominee for the presidency. If Trump’s candidacy threatens the Republicans’ narrow Senate majority, McConnell is reported to have fumed at a power luncheon of fellow GOP senators, “We’ll drop him like a hot rock.”

McConnell is an especially implausible defender of the Republican Party’s sullied dignity at this juncture. Just prior to the Times report, after all, McConnell and other senior Republican lawmakers announced that they would not even extend the formal courtesy of a Senate Judiciary committee hearing for the president’s nominee to replace the late Justice Antonin Scalia. When the Trump phenomenon is too much for a procedural nihilist like McConnell to stomach, you know that the Republican Party is in near-complete meltdown.

You also know that it’s lying to itself, in a big way. Anyone paying cursory attention to the conservative political scene since the great Tea Party uprising of 2010 understands all too well that antipolitics, far from being a Zika-style virus smuggled into the vulnerable GOP host organism by a single “outsider” populist presidential hopeful sporting a Chia Pet pompadour, has been the very lifeblood of the Republican political class since the dawn of the Obama era. And the recent political past has been studded with object lessons in what happens when you feed a major party’s movement base on unhinged fantasies of governance as identitarian rebellion by other means. There was the stunning primary defeat of Majority Whip Eric Cantor—himself a scheming courtier of would-be Tea Party antigovernment insurgency—by holier-than-thou Christian libertarian economics professor David Brat. There was the numbingly pointless litany of 60-plus bills repealing Obamacare—all dutifully endorsed amid great ideological sound and fury and even greater wastage of Congress’s already scant legislative calendar—which served no other purpose than to allow Tea Party incumbents to create the illusion that they were actually doing something (anything) in Congress to advance the agendas they ran on. (Or, you know, anything in Congress at all.) There was the GOP’s ritual sacrifice of John Boehner’s speakership on the altar of still more ideological purity, when he demurred on a proposed government shutdown over bogus allegations that Planned Parenthood was an open-air bazaar for fetal body parts. There was Ted Cruz’s equally empty—though immensely mediagenic—filibuster designed to provoke a (yes, again) government shutdown bid over (yes, again) Obamacare funding.  There was, for no explicable reason on Earth, the continued public relevance of Sarah Palin.

Looking back at this parade of confrontational nothingness, it’s hard to fathom why the Trumpist movement, or something like it, hasn’t happened sooner. In essence, the backlash-gone-wild that is the Tea Party phase of the GOP has detonated the cynical social contract struck at the outset of the Reagan revolution. Back then, you’ll recall, the business wing of the Right found symbolic common cause with an evangelical grassroots insurgency—and once in power, GOP apparatchiks would duly ignore the culture-war wishlists of religious conservatives.  (for the simple reason that actual progress toward implementing their Christian-nation reveries would make them that much harder to mobilize in full gospel fury for each new election cycle).

But during the Tea Party dispensation, the baldly transactional compact between the party elite and the true-believing movement base went haywire. GOP leaders couldn’t promise heroic government-leveling melees fast enough to keep up with the raging demand they’d stoked for such antics during election season—and what’s more, a Tea Party electorate fed on primary-cycle hit jobs took vengeful note of all the purported betrayals they suffered at the hands of the DC insiders running things in Congress. Soon enough, the simple threat of a primary challenge from the right was enough to dispel any lingering fantasies about grown-up compromise in the halls of Republican power. Meanwhile, the nationalist and libertarian strains of the Tea Party uprising provided ample play for ugly shows of nativism and bigotry on the newly revived grassroots right.

These, in other words, are all the woeful internal GOP dynamics we can now see converging in the outsize, orange-hued figure of Donald Trump, likely presidential nominee. The clear key to Trump’s primary success is the expert way that he validates the very thing that establishment Republicans are keenest to ignore: the cultural and economic grievances of a downwardly mobile white middle class. The unlikely figure of a billionaire as a working-class tribune is yet one more way in which Trump is a Republican nightmare; his anti-free trade and immigration-baiting platform also represents an explicitly class-based appeal to downwardly mobile Americans that no candidate from either party has pulled off since Pat Buchanan’s fabled 1992 culture-war campaign.

Unfortunately, as we all know too well by now, the Trump brand of class politics is also a racist politics. Rather than encouraging marginalized, white middle Americans to dress up as colonial patriots, Trump encourages them to attack nonwhite protestors, unleash displays of religious bigotry, and otherwise rudely defy the behavioral canons of “political correctness.” Just as important, he does all this while affecting a genial showman’s mien, which permits him to opportunistically back off from the political fallout he courts—and ensuring all the while that his theater-in-the-round production of “Falling Down” gets maximal press coverage.  No traditional GOP candidate could have managed, as Trump did this past weekend, to play dumb before the cameras as he was repeatedly pressed to disavow his endorsement by former Klan wizard David Duke, without setting his own campaign on fire. And no other candidate could have a white supremacist kingpin making get-out-the-vote robocalls on his behalf, or have a group of peaceful black students forced out of a campaign rally.

Trump’s deft culture-war shtick also permits Trump to short-circuit expectations of simple ideological consistency, let alone purity. He’s successfully peddled the image of himself as a great man to the Republican primary electorate—and his supporters readily accept the notion that a great man contains multitudes. Trump is anything but an avatar of conservative righteousness. He’s been a pro-choice, big-government liberal, and seems unto this day a more consistent supporter of single-payer universal health care than Hillary Clinton is. (He’s also twice divorced, something that hasn’t gone down well with the GOP’s self-styled “values voters,” since Reagan’s heyday.)  How the Trump insurgency plays out within the now-deranged coordinates of Republican electioneering and governance is anyone’s guess. But Americans of a left persuasion shouldn’t be too quick to gloat over the great Republican crack-up of 2016. As of this anything-but-Super Tuesday, Donald Trump is everyone’s problem now.