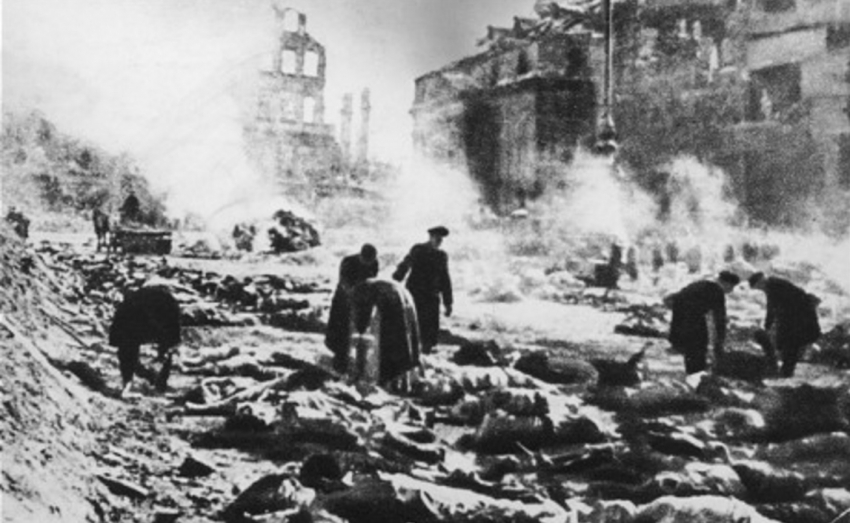 Memo to Ted Cruz: Carpet Bombing Is, By Definition, a Human Rights Atrocity

The cavalierness with which “carpet-bombing” has been discussed by the Republican candidate ignores the horrific human cost of such actions.

Not long ago, a video of ISIS burning a prisoner alive in a cage was met with howls of outrage and calls to action. Perhaps politicians and the public wouldn’t be so eager to support mass bombing if they knew what they were advocating was even worse than what they were trying to prevent.

In the game of murderous one-upmanship that has been the contest for the GOP nomination, one candidate’s promise has stuck out as particularly unhinged from reality: Ted Cruz’s promise to carpet bomb ISIS.

Cruz first made his pledge to “carpet bomb [ISIS] into oblivion” in early December, adding: “I don’t know if sand can glow in the dark, but we’re going to find out.” He went on to repeat this promise in two more debates, bizarrely defining carpet bombing as a targeted attack on enemy troops rather than indiscriminate bombing of civilian areas. For his troubles, he was roundly mocked by members of the military establishment for not understanding the meaning of the term he was so enthusiastically endorsing.

But he shouldn’t just take it from retired members of the military. If Cruz needs a refresher, there are fortunately plenty of survivors’ accounts of the horror wrought by carpet bombing at the ground level that can fill him in. (A word of warning: the following passages are not for the squeamish.)

Take the British carpet bombing of Germany. By the end of the war, the British air force had dropped nearly 1 million tons of explosives on German cities, most infamously Dresden and Hamburg.

Dresden was 54 percent destroyed by the bombing, killing tens of thousands. Its annihilation later led Kurt Vonnegut to pen his anti-war classic, Slaughterhouse Five. This is what that destruction looked like from the vantage point of the city’s residents, as described by Dresden’s chief of firefighting:

The buildings along the streets, shattered under the hail of bombs and seared by fires from the incendiaries, had collapsed and blocked the exit routes, consigning thousands to death in the inferno. …

The individual fire centers combine, the heated atmosphere shoots up like a huge chimney, sucking the rushing air up from the ground to create a hurricane, which in turn fans the smaller fires and draws them into itself. The effect of the pillar of hot air produced by such a huge blaze over a burning city would be felt by those in aircraft up to thirteen thousand above ground level.

Another survivor, a 15-year old schoolgirl at the time, described equally hellish sights:

Dresden was to burn for seven nights and days. The heat reached over 1,000 degrees Fahrenheit. In the center, there was no escape. The town was a mass of flames. People, burning like torches, jumped into the Elbe on this cold February night. Screams and cries for help were heard everywhere. The embankment was covered with bodies or pieces of flesh.

Worse than Dresden was Hamburg, 75 percent of which was bombed to rubble, killing between 60,000 and 100,000. One survivor, 19 years old at the time, described people literally getting stuck, quicksand-like, in molten roads:

the asphalt had melted. There were people on the roadway, some already dead, some still lying alive but stuck in the asphalt. They must have rushed on to the roadway without thinking. Their feet had got stuck and then they had put out their hands to try to get out again. They were on their hands and knees screaming.

Those who were lucky enough to survive had not escaped unscathed: “At midday—it never got light—a man came and pulled some of us survivors out of the crater. He was an elderly man who also had a burnt face. When he pulled me out by the hands, my skin stuck to him in shreds.”

Another account makes tragically real the indiscriminate nature of the bombing:

Four-storey-high blocks of flats were like glowing mounds of stone right down to the basement. …Women and children were so charred as to be unrecognizable; those that had died through lack of oxygen were half charred and recognizable. Their brains tumbled from their burst temples and their insides from the soft parts under the ribs. How terribly must these people have died. The smallest children lay like fried eels on the pavement.

One can literally spend hours and hours reading countless descriptions by survivors of people with “blisters the sizes of fists” on their faces and blackened bodies that had shrunk to as little as 60 centimeters (about 23 inches) long.

Historian Max Hastings notes that under such bombing, not even air-raid shelters were safe: “Many thousands of people asphyxiated in their subterranean gloom. …Sometimes burst boilers or water mains drowned or cooked underground fugitives.” As the 15-year old Dresden survivor put it, describing the fear of sitting an overcrowded bomb shelter and hearing bombs dropping outside: “We died a thousand times. Hell could not be worse.”

As minister of munitions in 1917, Winston Churchill had opposed bombing civilian areas 30 years earlier, as he believed “terrorizing” the German people would “have seen the combative spirit of the people roused” and never lead to surrender. In 1940 he changed his mind, believing only the Air Force could win the war.

Hitler, for his part, agreed with the Churchill of 1917. He welcomed the terrorization of the German people by bomb, saying it “actually works in our favor, because it is creating a body of people with nothing to lose—people who will therefore fight on with utter fanaticism.” They’re words the likes of Cruz, who believe bombing terrorists out of existence is the only solution to extremism, might do well to remember.

World War II was by no means the last time carpet bombing was utilized as a strategy by the U.S. military. During the 1960s and 1970s, the United States dropped more than 7 million tons of bombs on Vietnam, Cambodia and Laos. Recall that the Allies dropped only 2 million tons worth of bombs during the whole of World War II.

an experience of undiluted psychological terror, into which we were plunged, day in, day out, for years on end. From a kilometer away, the sonic roar of the B-52 explosions tore eardrums, leaving many of the jungle dwellers permanently deaf. From a kilometer, the shock waves knocked their victims senseless. Any hit within a half kilometer would collapse the walls of an unreinforced bunker, burying alive the people cowering inside. Seen up close, the bomb craters were gigantic—thirty feet across and nearly as deep.

The accounts were similar in Cambodia, which was on the receiving end of 2.75 million tons of bombs. One man, a peasant who joined the Khmer Rouge, recalled the experience:

The bombs came tumbling down in a big clump… right onto [the village], and that time villagers were killed in amazing numbers. …The bombs fell in the village, setting fire to people’s houses and killing them… sometimes they didn’t even have the time to get out of their houses.

Another Khmer Rouge member explained the psychological effect of the bombing on the Cambodian people:

The ordinary people were terrified by the bombing and the shelling, never having experienced war, and sometimes they literally shit in their pants when the big bombs and shells came. …some people became shell-shocked, just like their brains were completely disoriented. Even though the shelling had stopped, they couldn’t hold down a meal. Their minds just froze up and would wander around mute and not talk for three or four days.

The bombing later served as the centerpiece for the genocidal Khmer Rouge’s recruitment strategy.

Or take the 1990 Gulf War, cited by Cruz as an example of the kind of carpet bombing he would carry out. Contrary to Fox News Host Chris Wallace’s protestation that “we did precision striking” against Iraq, 70 percent of the 88,500 tons of explosives dropped in the war were in populated areas.

The Los Angeles Times in 1991 described it as “a hellish nightmare of fires and smoke so dense that the witnesses say the sun hasn’t been clearly visible for several days at a time.” According to Paul Roberts, a former war correspondent in Vietnam:

I experienced bombing in Cambodia, but it was nothing like that. …There were three waves every night. After 20 minutes of this carpet bombing there would be a silence and you would hear a screaming of children and people. [The survivors] were walking round like zombies.

In one incident, U.S. bombs struck a bomb shelter in Baghdad, killing hundreds of civilians. Though the newscast of the bombing was censored to save the U.S. public from the upsetting reality of their military’s actions, one Columbia Journalism Review reporter saw the unedited footage:

Nearly all the bodies were charred into blackness; in some cases the heat had been so great that entire limbs were burned off. Among the corpses were those of at least six babies and 10 children, most of them so severely burned that their gender could not be determined. Rescue workers collapsed in grief, dropping corpses; some rescuers vomited from the stench of the still-smoldering bodies.

What is the point of presenting this litany of horrors? As many pointed out at the time, because ISIS reside in populated areas, any attempt to carpet bomb the organization would inevitably result in scenes of gruesome suffering like this.

But perhaps more importantly, we should acknowledge the reality of what military actions like aerial bombing actually look like. Both the Republicans and Democrats have pledged to use air power in the fight against ISIS, but so often, phrases like “air power,” “air strikes,” “bombing” and even “carpet bombing”—not to mention sterile terms like “surgical strikes”—sanitize the nature of such operations by either abstracting them or clouding them in misleading language.

It’s one thing to talk about “carpet bombing,” but quite another to talk about people sinking into molten pavement and children losing skin and limbs. Not long ago, a video of ISIS burning a prisoner alive in a cage was met with howls of outrage and calls to action. Perhaps politicians and the public wouldn’t be so eager to support mass bombing if they knew what they were advocating was even worse than what they were trying to prevent.