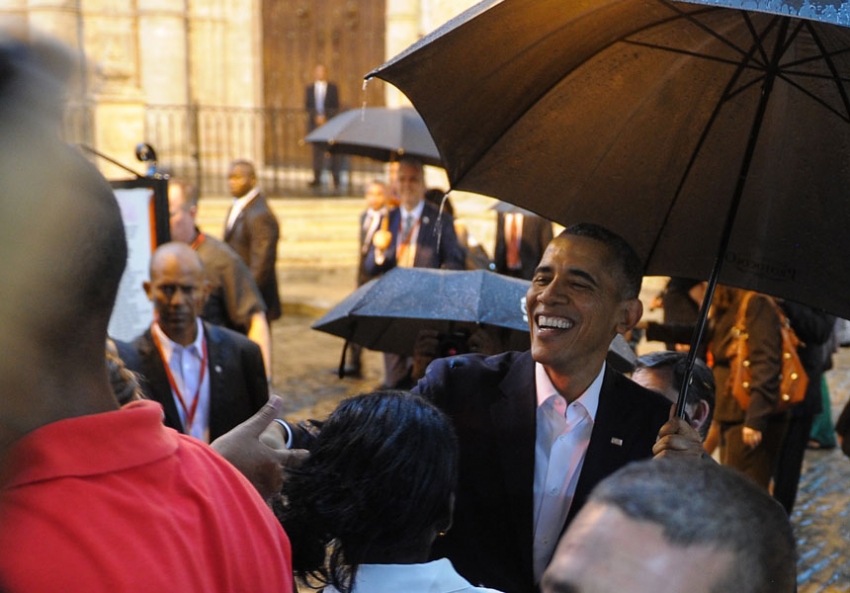 Barack Obama talks to tourists and Cubans at his arrival to the Havana Cathedral, on March 20, in the first visit by a sitting U.S. president to Cuba in 88 years. (YAMIL LAGE/AFP/Getty Images)

Younger Cuban Americans, beneficiaries of American education and civil society, and less personally invested in the pros and cons of the Cuban Revolution, are slowly taking control.

On Sunday, after President Barack Obama landed in Cuba, a video surreptitiously shot from a Central Havana rooftop showed his motorcade making its way through the mostly wet, empty streets, then stopping to let him out at the exclusive Paladar San Cristóbal. That’s when a curious thing happens: The Cubans on the rooftops—including the now shaky camera operator—start screaming, “Obama! Obama!”

Even on a computer screen from thousands of miles away, hearing Cubans cheering Obama outside the Plaza of the Revolution, where Fidel Castro railed against Yankee imperialism for half a century, was jarring. Even more unsettling, perhaps, has been finding Cubans and Cuban Americans from all sides of the political spectrum suddenly hopeful that, though it won’t be easy, Obama’s efforts will, eventually, help bring genuine change to U.S. relations with Cuba.

But visionary as Obama seems right now, he is less the author of a historic realignment than the beneficiary of extraordinary developments among Cubans, and perhaps more importantly, among Cuban Americans.

Where once Cuban Americans seemed almost universally opposed to any efforts to better relations with the island (and held American foreign policy hostage because of their outsized influence in Electoral College-rich Florida), the majority now support it.

The chasm between Cubans on and off the island has been slowly diminishing, thus the embrace of Obama’s visit by Cubans and, significantly, the majority of Cuban Americans. In recent years, Cuban Americans have been pouring money into Cuba, more than $1 billion annually according to some sources, and openly—although not necessarily legally—investing in a lot of new business in partnership with relatives and friends on the island.

In fact, in a March 2015 survey of Cuban Americans by the firm Bendixen & Amandi, 67 percent said they were planning an upcoming trip to Cuba—a confession that in the past could have gotten you killed on Miami’s Flagler Street.

Why the big change? Part of it is generational. The older, more entrenched Cuban-American community has been slowly, and literally, dying off. That’s the generation that was blowing each other up in Miami in the 1970s over who was more anti-Castro, and which loudly supported the U.S.’s economic embargo on Cuba.

Its counterpart generation in Cuba—the militants, or comecandelas, as they’re frequently called—have also been dying, or retiring, allowing for the possibility of greater openings. Even though Raúl Castro is hardly a spring chicken, it’s his ascension to power after the older Fidel Castro stepped down—and his deliberate recruitment of younger Cubans into the country’s administration—that has allowed for market reforms and the licensing of small entrepreneurs.

Raúl’s official successor, and the next president of Cuba, Miguel Díaz-Canel, was born after the triumph of the Revolution—as is the case with the majority of Cuban populations on both sides of the Straits of Florida. Though Fidel is said to support the renewal of diplomatic ties with the United States, it’s almost unimaginable that it could have happened on his watch.

In the United States, younger Cuban Americans, beneficiaries of American education and civil society, and less personally invested in the pros and cons of the Cuban Revolution, are also slowly taking control. Children of the first generation of exiles make up an ever-growing share of the Cuban-American vote. And that vote—supplemented by newer arrivals from Cuba who tend to have a less politicized attitude—has been increasingly more open to dialogue and reform in U.S. policy toward Cuba. Hell, there was even a Cuban-Americans for Bernie Sanders rally in Miami this month—mindblowing when just a generation ago, being accused of being a socialist was as bad an insult as could be hurled among Cuban Americans.

Sure, there are still remnants of the old guard, like Marco Rubio, the Cuban-American senator and erstwhile savior of the Republican Party, who was recently embarrassed out of the Republican presidential race after he lost all but one of Florida’s counties (Miami-Dade) to Donald Trump. Though demographically younger than most Cuban-American hardliners, Rubio has railed against Obama’s reforms. Rubio is so hardcore that he has even spitefully put a Senate hold on Roberta Jacobson, the proposed U.S. ambassador to Mexico, because, as assistant secretary of state, she helped negotiate Obama’s Cuba opening.

But Rubio was a last gasp for the old guard. Consider this: In Miami-Dade County, where the Latino population is overwhelmingly Cuban, there were 256,407 registered Hispanic Republicans and 126,255 Hispanic Democrats in 2006. By February of this year, Hispanic Republicans had edged up to 256,479 while Hispanic Democrats grew to an astounding 209,504. In other words, many Cuban Americans were probably more interested in the Clinton-Sanders race than in Rubio’s.

Cuban-American abandonment of the Republicans means Florida (if not Cuba, as the hardliners would prefer) is liberated, and U.S. politicians and government officials are finally free to make Cuba policy based on U.S. and Cuban mutual interests.

No, Obama’s speech in Havana this week won’t make much difference right away to the daily lives of Cubans on the island. And, yes, there are plenty of things that need to be dealt with that he didn’t touch upon and won’t likely act on before he leaves the White House—such as Guantanamo, the Cuban Adjustment Act and the embargo—that are crucial for an honest relationship of equals. But Obama’s new attitude is important not just to the United States and Cuba, but to the rest of the Western Hemisphere, which has long struggled with how to handle the bitterness between the two countries.

Most importantly, the speech went a long way to remove the threat of the United States from Cuba’s horizons, and to emphasize that the United States knows the future of Cuba depends solely on Cubans, both on and off the island. And that certainly was something to cheer about.